10 of the most futuristic buildings in the world 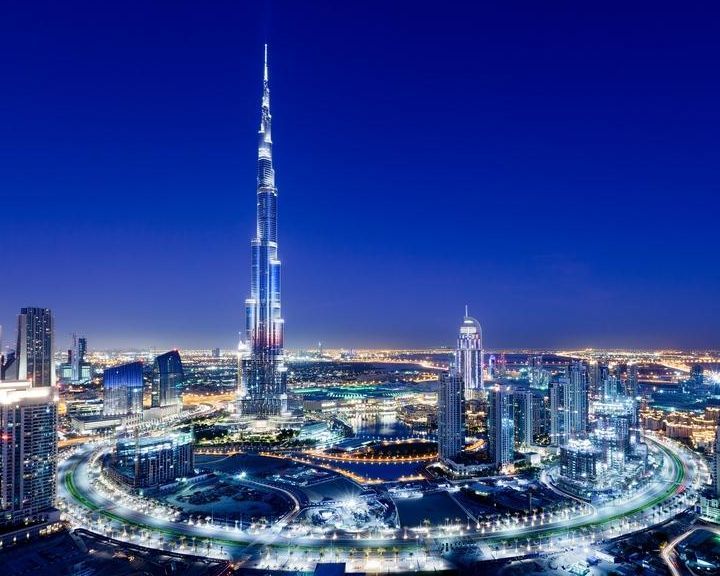 Many things that we use every day, until recently seemed to be something out of science fiction. But not everyone eventually becomes commonplace. We will talk about the most futuristic buildings from around the world who will long striking. 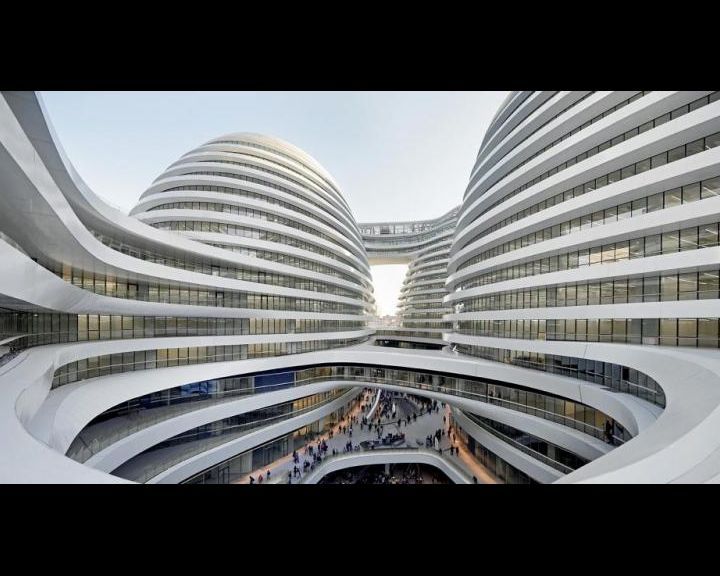 Work on this ambitious project by architect Zaha Hadid was conducted for almost three months, from 2009 to 2012. Galaxy Soho Building consists of five elements, but the main attention is paid to four of them: the dome defining an inner atrium with balconies, as well as several closed courtyards – a kind of tribute to the Chinese culture. Dome-shaped body with smooth lines are interconnected at different levels and transitions platforms. The height of the building is 67 meters and the area of ​​the complex is equal to 330,000 square meters. 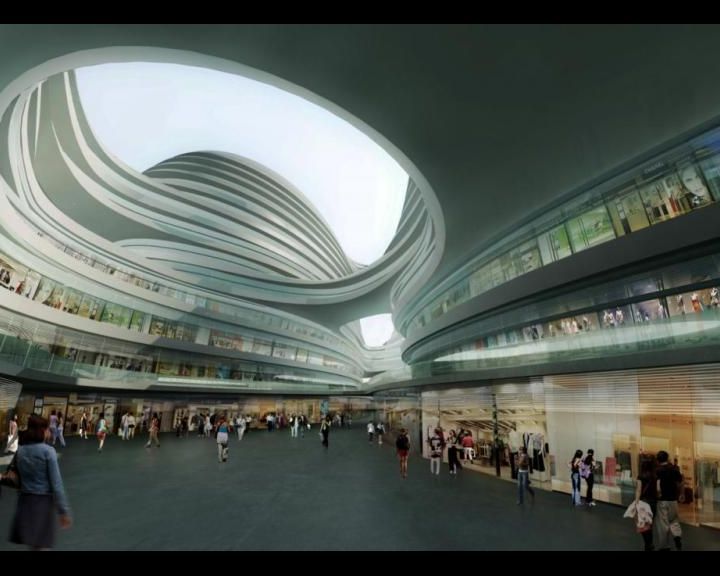 What lies behind this unusual design of the building? In fact, we have a retail and office complex, which consists of three underground floors and fifteen ordinary. At the lower levels car park and shops, from the third to the fourteenth floor are offices, and at the last cafés and restaurants.When looking at building a feeling of perpetual motion and the transition from one state to another. Architect stresses that such forms prompted her very nature. 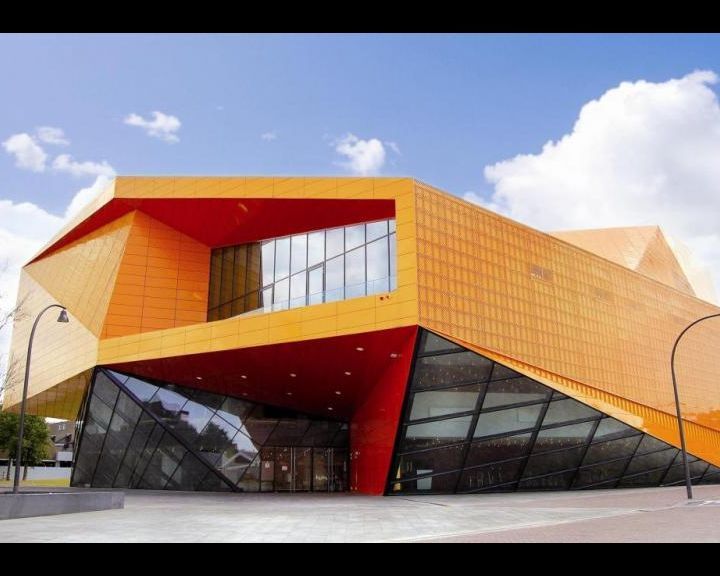 The building, which looks like a giant store IKEA, actually is a multifunctional theater. Located in Lelystad (the provincial capital of Flevoland, the Netherlands), this unique object has become a kind of cultural symbol of the whole country. Walls of the building are designed to receive the kaleidoscope effect, and all premises theater specially painted in bright contrasting colors that are very different from each other. Thus, the main auditorium is painted in red, and the lobby – in almost sugary pink. 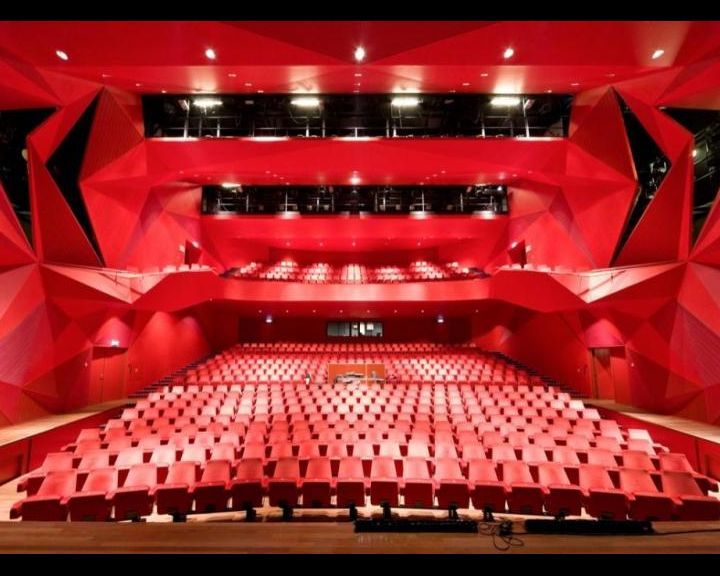 Because of its unusual shape and bright orange building visible from afar, and the interiors are fascinating shades of red, pink, magenta and cherry blossoms. The use of such bold colors in itself is an art. In addition to its core functions, the theater “works” a significant tourist attraction. 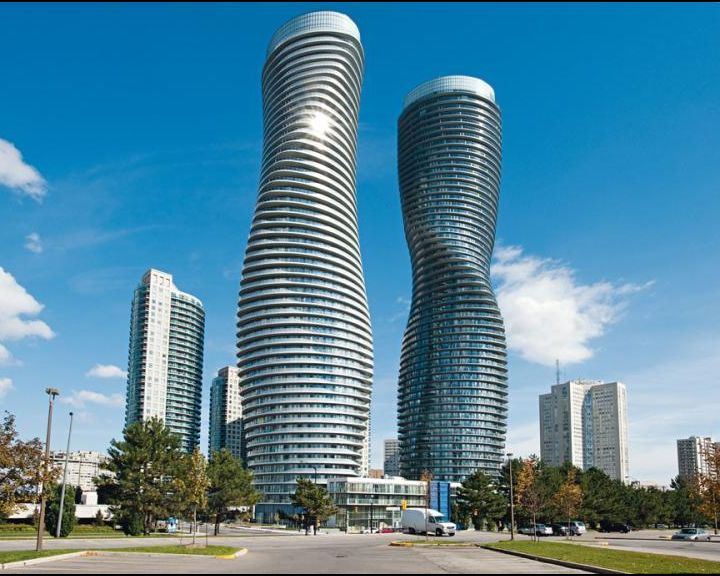 Absolute World Towers – this two residential skyscraper complex Absolute City Centre, which consists of five buildings and is located in Mississauga, Canada. Locals call these towers “Marilyn Monroe” because of its unusual design with smooth lines inviting. In 2007, when the international contest for the project Absolute Tower, thanks to this decision architectural firm MAD Studio managed to get around more than 600 other applicants. 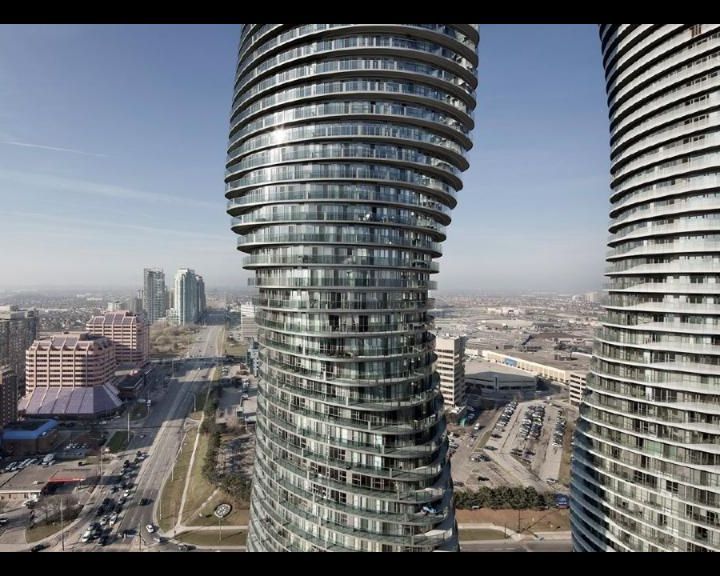 First tower height equals 179.5 meters, the second – 161.2 (56 and 50 storeys respectively). When designing buildings main goal was to create a good review of any of their terms, so the floors of skyscrapers from bottom to top are rotated 209 degrees. In these towers can not find at least two identical or balcony floor. Despite quite a futuristic design, the building is not knocked out of the surrounding streetscape, and it fit perfectly.In 2012 the tower was honored with “Best high-rise building in America.” 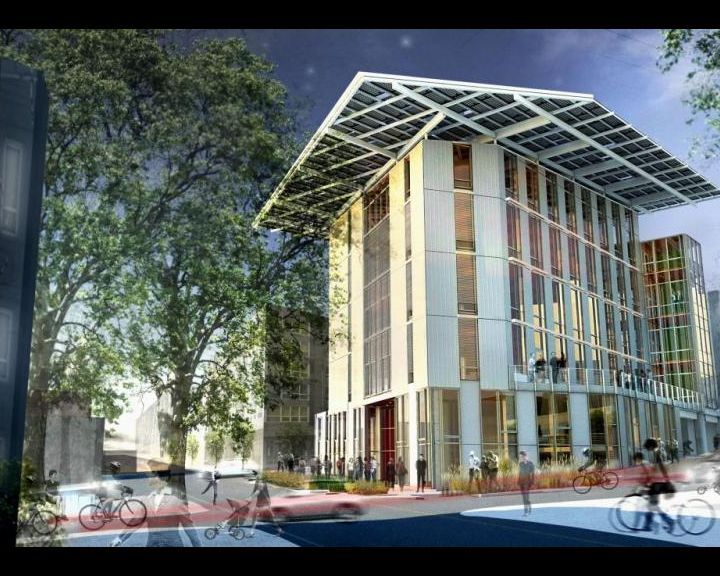 This is an unusual building, located in Seattle (Washington, USA), is considered the most “green” office building in the world. It is a kind of prototype buildings cities of the future. The building functions as a living organism that does not depend on any municipal systems: to provide energy for all six floors allow solar panels, water for the needs of the building going, filtered and used rainwater. 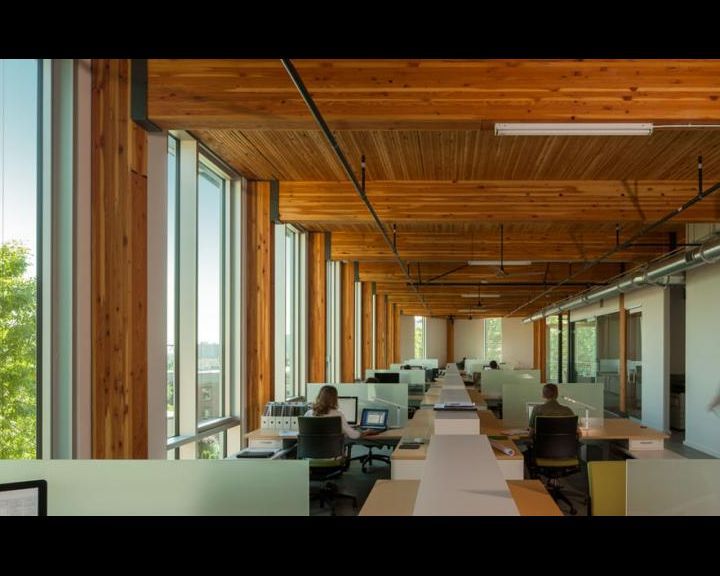 Insulation, ventilation and recovery system built to reduce heat loss to a minimum. In general, Bullitt Center is fully compliant with the “active house” that is, it produces energy for their own needs more than enough. The building is designed so that it can work out successfully in this mode 250 years (at least in theory). 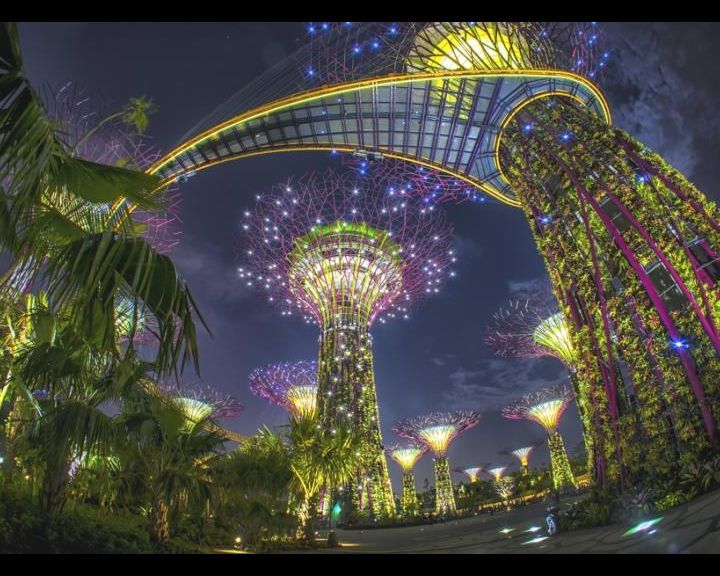 These magnificent structures – not quite the building, but, nevertheless, we can not talk about them. Futuristic park consists of three gardens, which occupy just over a square kilometer territory. 18 huge “trees”, whose height ranges from 25 to 50 meters, and at night turns into a real forest of glowing future. They are connected by bridges and covered with numerous species of plants, some of which are quite rare. Location on the Bay is the best complements this picture. 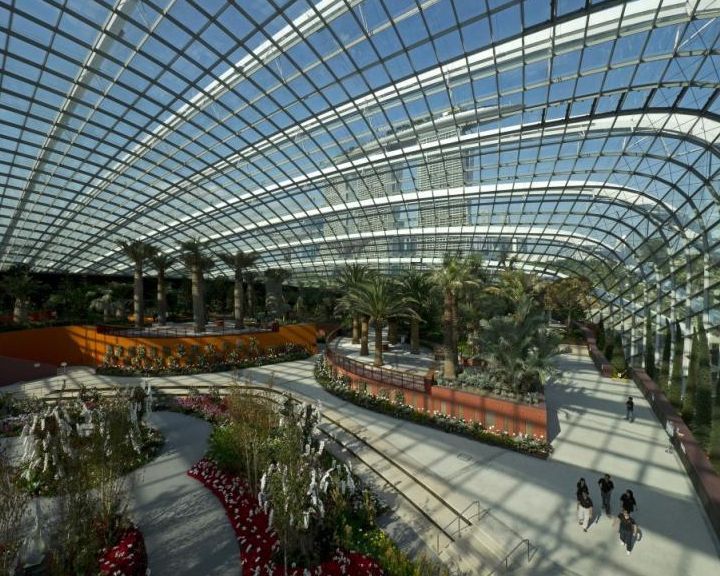 In total there are planted 226,000 plants. In addition, the established water gardens and pools, open two conservatories. In “Color Dome» (Flower Dome) represented the Mediterranean flora, and in the “Cloud Forest» (Cloud Forest) with the help of relief, a 35-meter waterfall and lush vegetation modeled humid equatorial mountain climate. This project was brought to life thanks to the Singapore government, which wants to turn the “Garden City” in the “City in the Garden”. The purpose of these transformations is to improve the quality of life of citizens through development of the flora of the city.

The creation of this museum in Dallas architects tried to embody in it the unity of science and nature, which is evident from the name. The basis for building the cube was taken, under which is an additional area, planted with a variety of plants. Zone in front of the museum is also a “green”, but the nature of its plants resemble primarily characteristic of Texas landscapes. Actually, it is with these zones and begins tour of the museum. 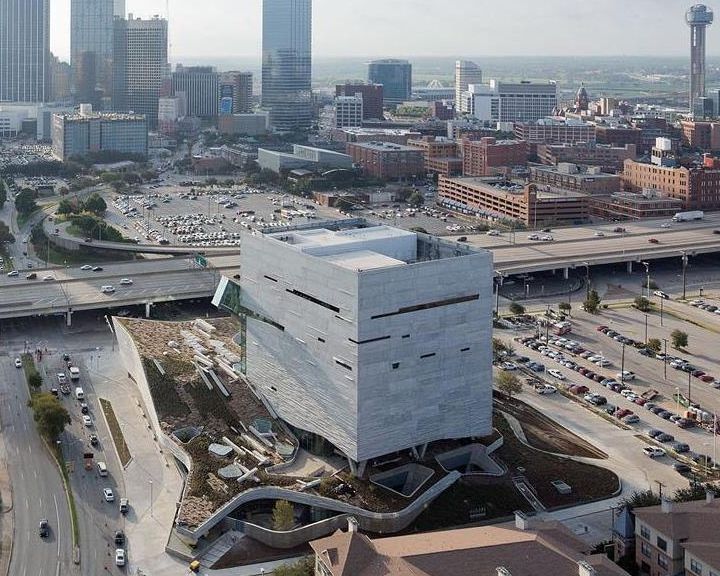 In the museum exhibition organized five floors, each of which may be accessed by elevator or climb the initially 16-meter escalator to the top floor and uniformly explore all the exposure way down. 5th floor – it’s Hall of birds, 4th – Hall of the Universe and the ancient nature, 3rd – Hall land, minerals, crystals and energy, 2nd – Hall opening life, human existence and technology, and on the 1st floor is a cinema, a shop and cafe.If we talk about the equipment of the building, then you can become a sign of good manners solar panels, rainwater harvesting and other achievements of modern “green” technologies. 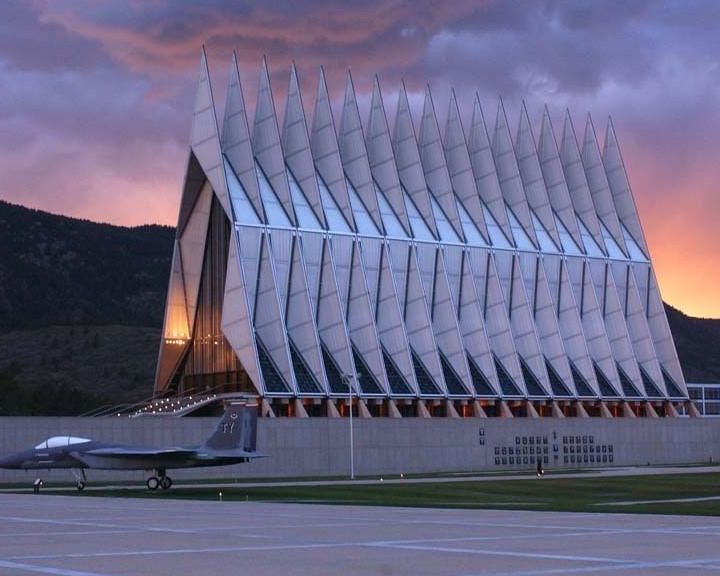 This building with mixed design in Colorado is nothing like the Cadet Chapel U.S. Air Force Academy, and it was built between 1959 and 1962, which then you will not say. Initial construction building planned 19 spiers, but later their number was reduced to 17, primarily for economic reasons. One such spire consists of 100 identical tetrahedrons, each length – 23 m, weight – 5 tons. All of them are covered with aluminum panels. 30 centimeters distance between tetrahedra closed colored glass thickness of 2.5 cm windows and doors of the chapel made of gilded aluminum. The construction of this building was spent about $ 3.5 million, with nearly all the furniture, interior elements and even organ donations were.

An interesting feature of the chapel is the fact that co-exist under one roof three religions. The second floor is occupied by a Protestant area, located on the first Catholic and Jewish. There is also a small room for Buddhists. Each zone has its own entrance, so the service can be carried out simultaneously, none will not disturb anyone. Despite the fact that the original building has caused a lot of criticism because of its design, in 1996 the chapel was awarded the “quarter-award” from the American Institute of Architects, and in 2004 joined the list of National Historic Landmark.

This futuristic building, located in the eastern part of London, was established in 2012 thanks to the initiative of Siemens. The structure of an area of ​​6, 000 square meters confirms its name and really looks like a huge crystal. And tucked under his roof exhibition halls, meeting rooms, technology centers and innovation, as well as office space, cafes and even a place for recharging electric vehicles. 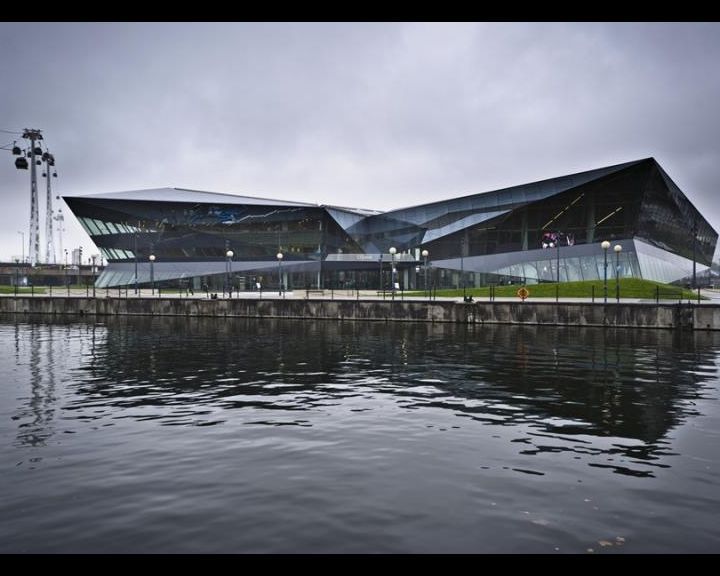 The building is literally stuffed with the most modern technology in the field of heat and energy: solar panels, in addition to producing electricity, heat a special water tank, which is used for building heating, ventilation system itself determines when to include air conditioning … What is symbolic in this building are meeting international level, the main objective – improving environmental conditions and widespread incarnation of “green” technologies in life. 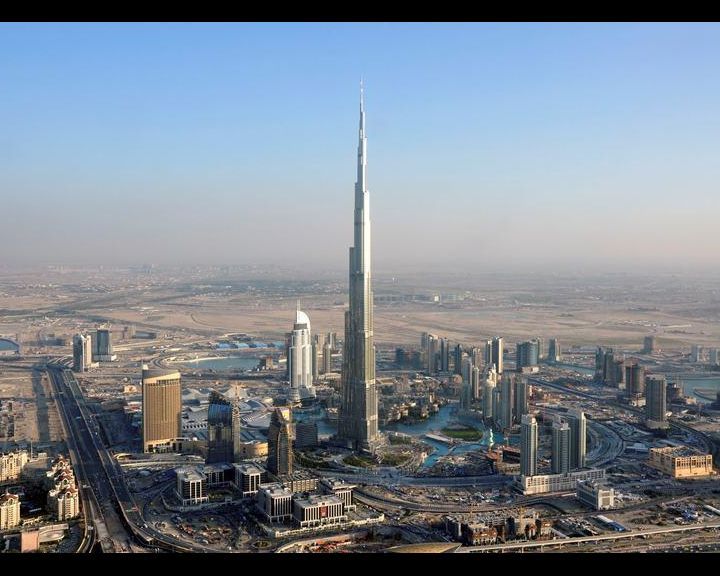 Burj Khalifa (translation – Khalifa Tower) is the tallest building in the world. It opened in 2010, and since then no country has not built a building above 828 meters – 163 floors. Even on paper tower planned as the tallest in the world, and during the construction of information about her height to conceal – in case skyscraper appears even higher so that you can adjust the tower in Dubai.

Tower, shaped like a stalagmite, designed as a “city within a city” and its cost has exceeded $ 1.5 billion. Placed inside a giant skyscraper hotel, apartments, offices and shopping centers. 100th floor (and three apartments with an area of ​​about 500 square meters each) is wholly owned by an Indian millionaire. 122 on the ground floor is a restaurant “Atmosphere” – the most an upstream restaurant in the world. On the 124th floor (height – 452 meters) is an observation deck. The building has 57 elevators work, and only the service moves from the first to the last floor – you have to ride with transfers. The air inside the building is not only cool, but also flavored – the smell was designed specifically for the tower. Glass buildings reflect sunlight to maintain the optimum temperature inside, and their area is comparable with 17 soccer fields. Glass wash every day, but just need about three months to wash them all. Overall, the Burj Khalifa, owner of 12 world records.

This unusual structure can be called one of the main attractions of Brussels. It was designed for the World Fair in 1958 as a symbol of the peaceful atom. Initially the building was covered with an aluminum layer, but in 2006, after an overhaul of its steel liner replaced. 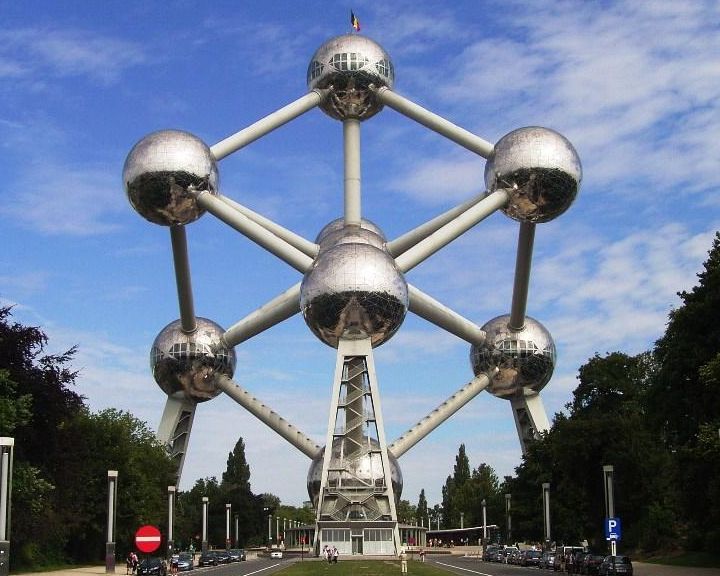 All structure consists of nine balls atoms, which are interconnected in the form of a crystal lattice of iron fragment, a larger 165 billion times.Construction height of 102 meters, the diameter of each ball – 18 meters. Available to visit six balls. In pipes between the spheres are escalators and corridors, and a total of 20 pieces of 23 meters each. In the central tube hidden elevator that goes upstairs to the restaurant and observation platform.