10 NEW PRODUCTS, WHICH WILL SHOW THE GOOGLE ON THE MAIN EVENT OF THE YEAR

Google is actively preparing for the main event of the year – the conference Google I / O 2015. This event is always accompanied not only announcements that are important for developers, but also for consumers. According to tradition, a few weeks before the event Google announced the schedule section with a brief description on the basis of which there are several important announcements that await us in the developers conference.

The new version of the system, the full name of which is not mentioned (Muffin? Mars? M & M’s?), Was mentioned in the description of one of the sessions. Google later removed from the session schedule at all, relegating to dinner three hours.However, the information has already been submitted, and we expect the announcement of Android M during the keynote address, the beginning of which falls on May 28 19:30 Moscow time.

In the section of Google ATAP it stated that the company will introduce wearable Soup, and in the description contains the phrase “will carry the socks” with a note: “We mean it more literally than you might think.” Smart shoes? Or does it wear? The last, by the way, do not be surprised – such device does not only have, but even sold .

According to another section, the search giant is going to offer developers a new technology that enables you to control applications without touching the screen, using only voice. They promise an easy adaptation process applications. Given the presence of a very high quality of recognition even in Russian, this feature can touch us much earlier than the different payment systems.

This section is much more hints that we can see its name, rather than description. Google promises to make “the next step in satellite images”, and section name gives a hint that the search giant wants to roll out the ability to obtain images in real time. 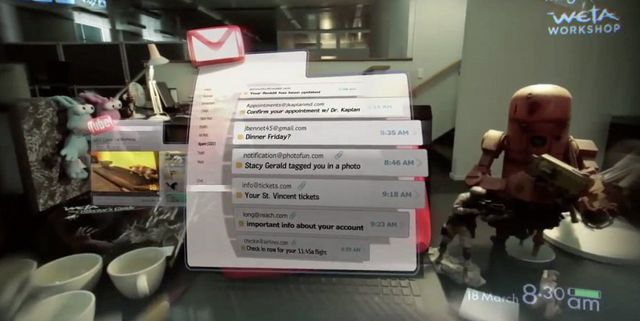 Several sessions are dedicated to virtual reality, which once again confirms the previously encountered rumors about Android VR.Even Google itself has recently added fuel to the fire – in late 2014, Google has invested 542 million dollars in start-up Magic Leap, working on augmented reality glasses, and their technology has recently been demonstrated in a fantastic video . Breakthrough is not expected, but the Google can get something sensible. We are waiting.

Google announces “new technology to find and communicate with devices located nearby.” How it will be implemented this feature, we learn at the presentation itself, and while it can be assumed that it is for the future of these technologies and tourism advertising in physical stores.

Despite the enthusiastic reception of the new philosophy of the interface, the developers were quite sluggish when it went on the transition to Material Design. Google wants to push everyone to redesign and several sections devoted to it, where will talk about the need for simplicity and integration. Maybe this will help speed up the process a little “materialization” of third-party software.

Manufacturer systematically increasing its ecosystem of gadgets and offers more opportunities to the various devices. Now Google wants to improve the technology to display different information on several device, for example, the dashboard display on the smartphone screen and the view from the vehicle on the display of the TV (promise simple adaptation of existing projects).Technology works in Google Cast. It may be announced Chromecast 2.

Google bought the company-developer of thermostats Nest more than a year ago, but so far from home automation companies from Mountain View is in the pre-conception state. The session is dedicated to make the house more “intelligent.” Perspective direction where there is more and more high-tech companies, Google, it seems, is not going to lose too.

The new platform, as usual, the “faster, higher, stronger.” It promises a simple job with a platform for messengers and notices. Will the real benefit to consumers, see, but the unstoppable flow of notifications need finer management, definitely. Especially with the advent of smart watches and fans to write messages in instant messengers, consisting of a single word.

In addition to these innovations, we almost certainly will be pleased with the new gadgets, it may even be cheaper Nexus line of devices . What do you expect from Google I / O 2015?