Aegean Coast of Turkey: the legacy of antiquity without a visa 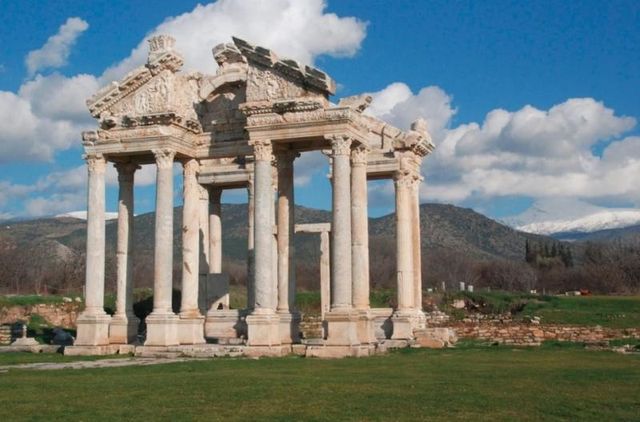 0
SHARES
76
VIEWS
Share on FacebookShare on Twitter
September – the perfect time to go to the Turkish coast of the Aegean Sea, and is not burdened with visa issues and expensive flights, combine a beach holiday with a tour of the ancient ruins that have been preserved is not worse than in Greece or Italy ..

The ancient city of Aphrodisias is located on a high plateau surrounded by mountains, at an altitude of 600 meters above sea level. This place – a magnificent example of the Wild from the plateau on which grow delicious citrus orchards and poplar groves, escape dozens of rivers, and above it all almost all year round extends the clear blue sky.

Aphrodisias was once the most important cultural center of the Roman province of Asia. The ancient city was at the crossroads of trade routes from Caria in Lydia and Phrygia, but remained a sacred place, and not a center of trade. The official status of the city, he was at the beginning of the II century BC, which allowed him to quickly transform into a major religious center, enjoyed the patronage of many of the Roman emperors.As you can tell from the name, city professed cult of the goddess of nature and the beauty of Aphrodite. Developments of the cult reflected in the architecture of Aphrodisias – there were many elegant buildings decorated with masterpieces of the best masters of the Roman Empire. 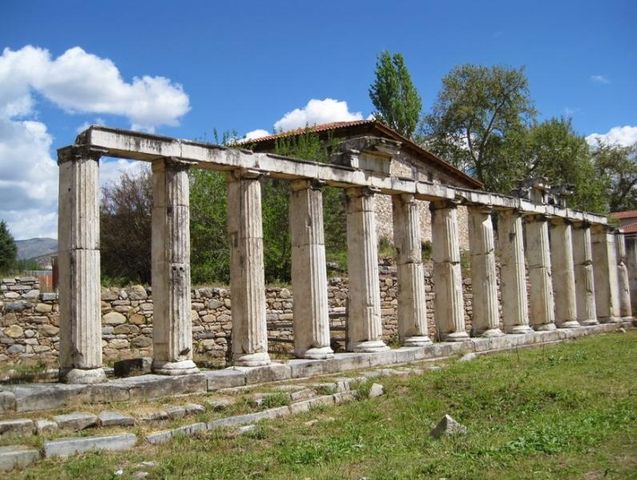 In the Christian era the Byzantines renamed the city Stavropoleos, but locals continued to worship their beautiful goddess. Aphrodisias was empty only in the XIII century: the constant earthquakes and foreign invasions caused people to leave the city. Perhaps that is why today it is in good condition and allow travelers to go back to the Antiquity. There remain a large stadium, theater, tetraston (a huge area, once surrounded by colonnades), Odeon, 14 columns of the Temple of Aphrodite, the council building, a complex term, Agora, tetrapilona (ancient gate with double rows of columns), the Bishop’s Palace (likely in fact, it was the residence of the governor of the Roman province) and the building of the school philosophy. At the entrance to the city is a small museum, which contains a collection of marble statues of gods and goddesses, as well as governors and soldiers. 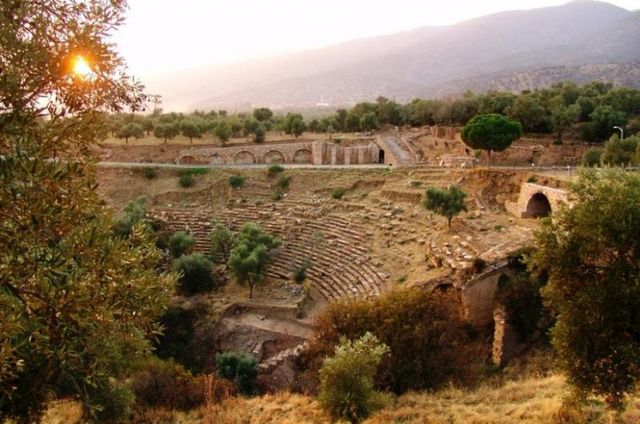 This ancient city is located 50 kilometers from the famous Ephesus. It was founded in 280 BC. e. ruler Antiochus Soter, who built Nisa in honor of the god Dionysus. Nisa bridge, built in the Roman period and well preserved to our days, is the second largest ancient bridge after the Pergamon. The town was located at the crossroads of merchants and pilgrims, it is not surprising that in the shortest possible time, he became a cultural and educational center, where sought by many scientists, artists and philosophers. In the ancient city, you can see the well-preserved Roman theater at 12,000 seats, the ruins of the library, which was once considered one of the richest in the whole of Asia Minor and the second largest after the safety of the library in Ephesus, bulevterion – the seat of the city council, designed for 800 people, where you can admire the ancient mosaics and pools. well preserved stadium, the remains of the agora, Roman baths, gymnasium and necropolis of the city walls. 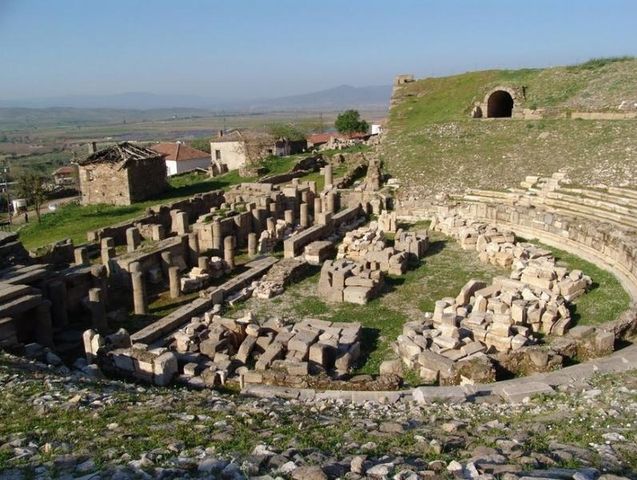 Alabanda – ancient city, from which today little remains: only bulevterion, six-meter high walls and the ruins of the theater. However, it is also worthy of attention. Legend has it that the city was founded by the mythical hero alabanda, which the locals ranked as gods. Unfortunately, the once flourishing village was badly damaged when raiding army of Philip of Macedon, and then Quintus Labienus – a supporter of Brutus and Cassius in the fight against the Second Triumvirate. However, people do not leave the city, as it happened with Aphrodisias, and some time later he was even the center of the diocese of the Patriarchate of Constantinople. 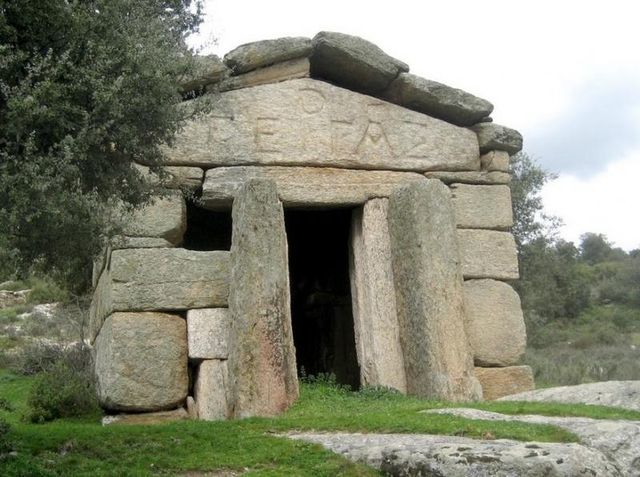 At 40 kilometers from the city of Aydin sovremennogog are the ruins of the ancient settlement Gerga. On the history of the ancient city almost unknown. Most of the surviving buildings belong to the Greek and Roman periods, but at the same time, some of the finds date back to more ancient times. Scientists tend to believe that Gerga was sacred area, founded in honor of a long-forgotten deity. Supporting this theory are two vertical obelisk, a huge swimming pool carved into the rock, and a large headless statue, which is most likely acted as a fountain. It is worth noting that, individually, these buildings look pretty clumsy, but their combination is a mystical feeling. 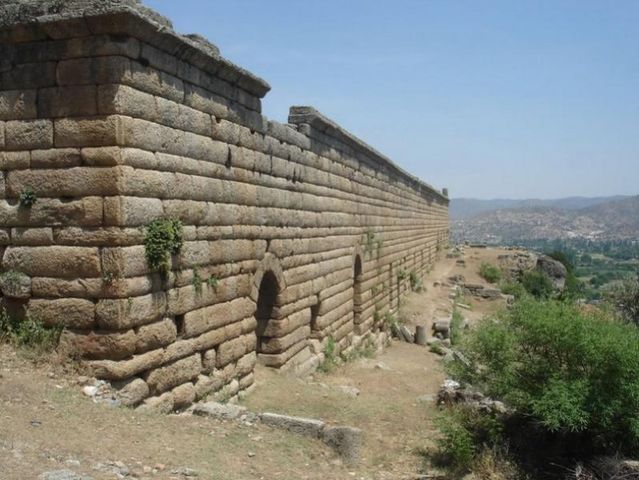 On a giant rock, above the valley of the Chin, are the ruins of the ancient city of Alinda. He is known for the fact that there was “headquarters” of the great commander of Alexander the Great. This also was exiled daughter of Mausolus of Halicarnassus (the one after whom it was named one of the Seven Wonders of the World), the queen of Hell quickly became a good friend of the famous Macedonian, for which he was later rewarded by Alexander appointed her ruler of Caria. In Alinda can see the agora, the remains of a three-storey palace and defensive walls, a theater, a large two-story tower, destroyed tunnels, ruins of the Acropolis and the ancient cemetery. 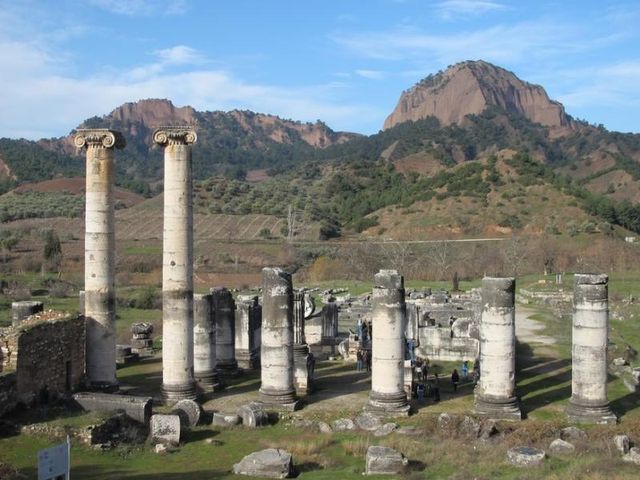 This ancient city from the VII century BC was the capital of the Lydian kingdom. It is here for the first time began to mint gold and silver coins. An ancient legend says that the city has gained wealth through the king Midas, who paid into gold everything he touched. He washed his hands in the river Pactolus, which then began to bring the golden sand. Here the rules of the famous King Croesus, whose name is still synonymous with the word “wealth”. The fate of Sardis fell to a lot of trouble, the worst of which – an earthquake in 17 AD, which literally erased city to the ground.Over the years, the town was rebuilt and became the center of the Byzantine province. However, in 1402 Sardis again were destroyed, having undergone the invasion of Tamerlane. 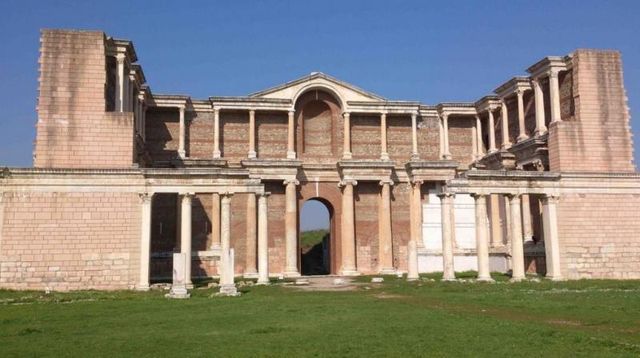