Alfawise reminds us other popular Chinese manufacturer – Xiaomi. It seems that Alfawise launches any kind of devices, except smartphones. We already wrote about projector, electric generator, electric scooter and other gadgets. This time, the Chinese company introduced a fitness bracelet called Alfawise T9.

Nevertheless, the information on GearBest is enough to make the first review of Alfawise T9. We are interested in this fitness tracker, because it measures not only the heart rate and pressure, like many other smart bracelets, but also the body mass index, protein and water in human body, and many other parameters.

As usual, we will talk about main features of new device in the first review. Later we will try to get new Alfawise fitness bracelet to make unboxing and full review. 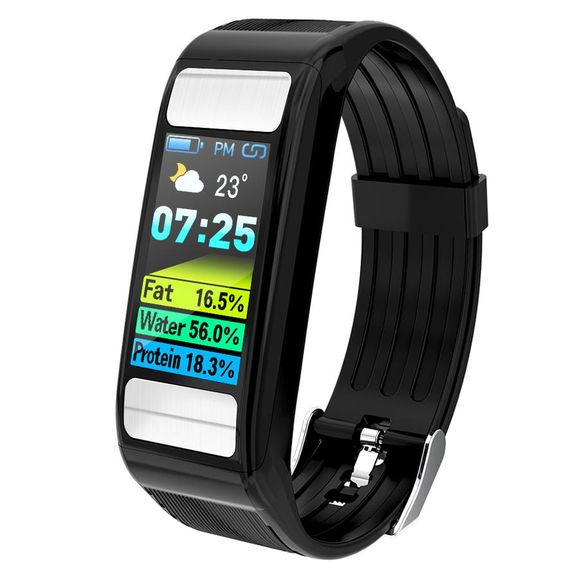 At first glance, Alfawise T9 looks like many other fitness trackers, in particular Xiaomi Mi Band 3. The gadget consists of a rubber strap (it looks like a non-removable), and a main screen capsule. 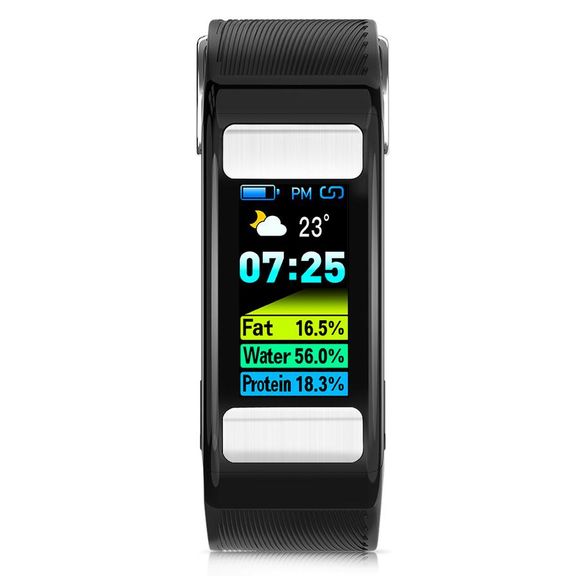 Alfawise T9 display has a diagonal of 0.96-inches and a resolution of 160 x 80 pixels. The size and resolution of the screen is higher than that of the same Xiaomi Mi Band 3. This is logical, because the fitness tracker from Alfawise shows more information. In addition, the display is color, unlike Mi Band 3.

Two sensors are located above and below the screen. They are used to collect user data, which we will talk about later.

On the back is a heart rate sensor and a charging connector. 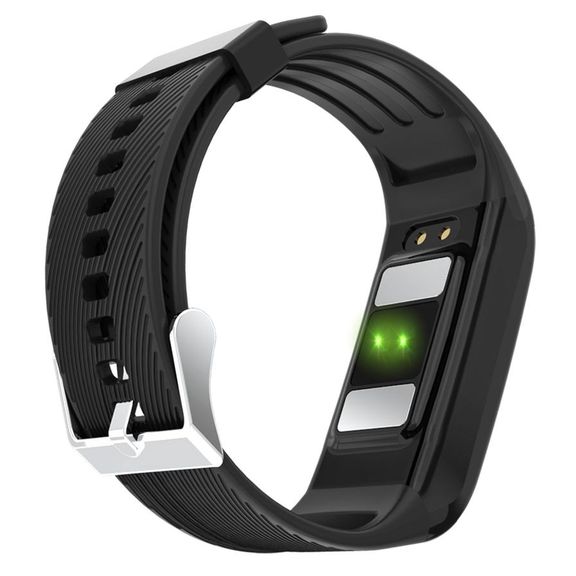 Now let’s talk about the functions of the new fitness tracker Alfawise.

The main feature of Alfawise T9 are two sensors at the top and bottom of the screen.

As we understand, the fitness tracker works on the principle of smart scales. When you stand on the scales with bare legs, an electric current passes through your body. Substances in humans have different resistance to current. Thus, scales collect information on the amount of protein, water, weight of muscles, bones and other substances. 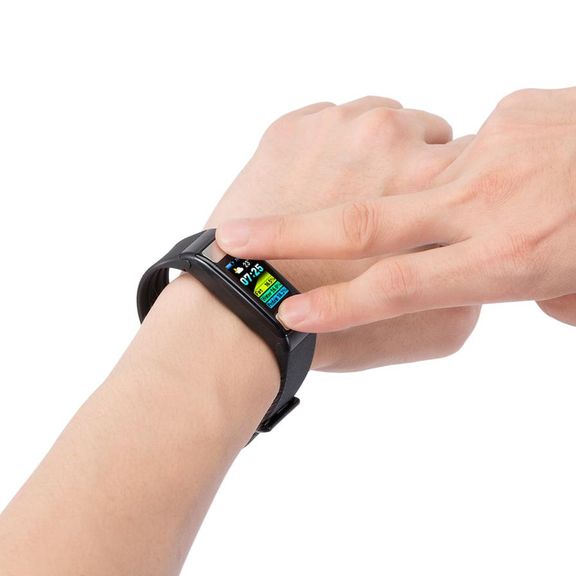 Instead of getting up with your feet on the fitness tracker, you only need to attach the index and middle finger to the two sensors above and below the screen. An imperceptible electric current passes through the body, collects data about the resistance of substances inside the body and displays detailed information on the fitness tracker or smartphone screen. 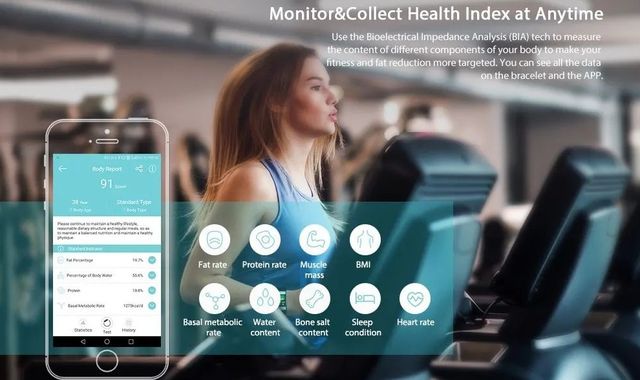 This function looks very interesting and promising, but we have not seen any real tests. The main question remains – how accurately does Alfawise T9 fitness tracker measure the parameters and does it measure them at all? We still have to find out.

As for the other functions of the fitness tracker, they are standard: sports modes, sleep analysis, pedometer, heart rate monitor, notification of calls and messages.

The smart bracelet offers an application on a mobile device called Gloryfit.  Using the app, you can monitor all the parameters, ranging from the number of steps and sleep quality, ending with body mass index, bone weight, amount of water in the body, etc.

If you are interested in specifications of Alfawise T9, then the fitness bracelet is equipped with nRF52832 processor, 64KB of RAM and 512KB of internal memory. In fact, it says little. 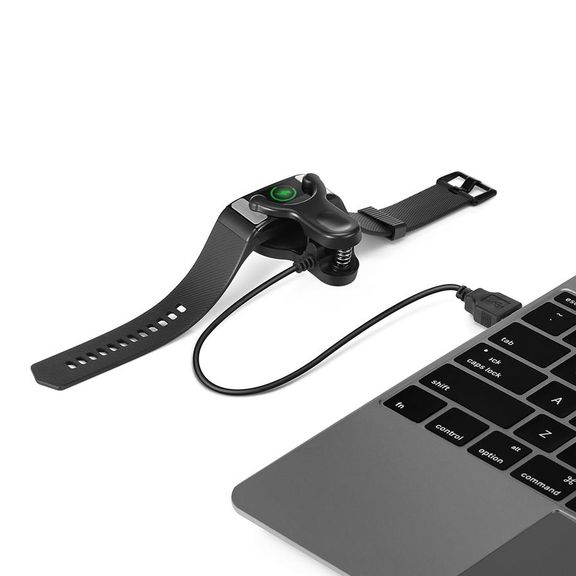 More interesting and important thing is battery. Fitness tracker is equipped with 90mAh battery. The manufacturer promises up to 30 days of battery life. Of course, the battery life will depend on the frequency of use of heart rate monitor, pedometer and other functions.

Nevertheless, even two weeks is a good result for a fitness tracker with such a large set of useful functions.

Alfawise T9: Price and where to buy

As we said before, Alfawise T9 fitness bracelet is available only in GearBest online store. The price is $39.99.

If all the functions of Alfawise fitness tracker work as the manufacturer claims, then this is really a very interesting device. We are waiting for the first hands-on reviews and tests of Alfawise T9. 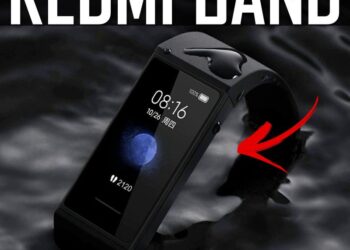 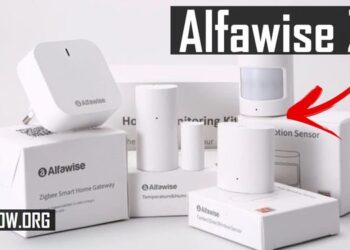 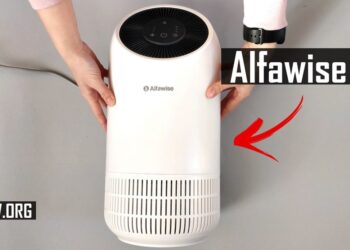