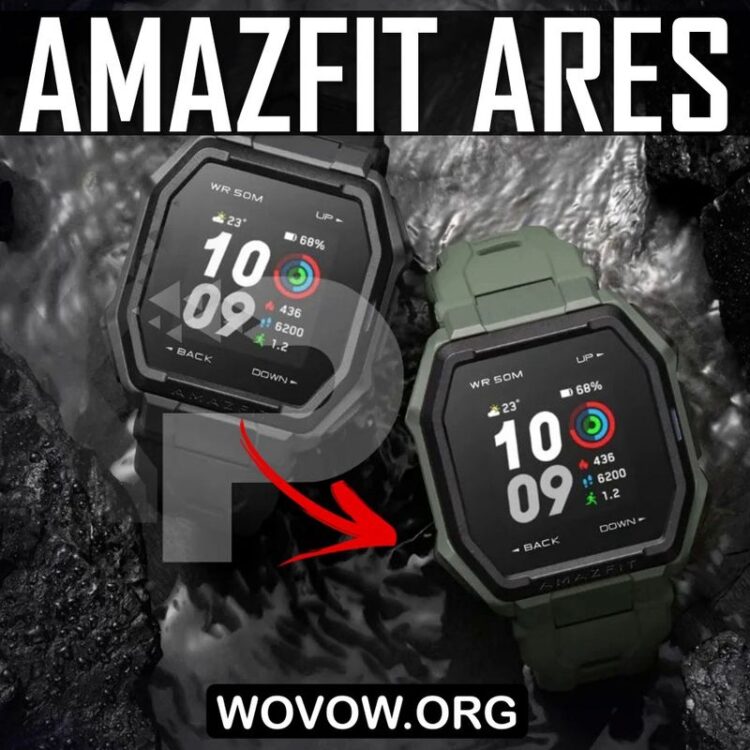 As you know, the market for wearable devices is very large today. Probably only smartphones are made more often than smartwatches. While Xiaomi used to have only one Mi Band fitness bracelet, today you can already get confused in the range.

Amazfit T-Rex was the first smartwatch from Xiaomi with a rugged case according to military standards. However, in this article I want to tell you about other shockproof smartwatch called Amazfit Ares. It has not only a protected case by military standard MIL-STD-810G, but also an interesting design with a square display and trimmed corners, Firstbeat and PAI functions, and up to 13 days of battery life in a single charge.

Although we do not yet know the price and release date of the new Amazfit smartwatch, the specifications and functions are already known. Let’s talk about them.

As I said, the new Amazfit Ares smartwatch has a small square 1.28-inch display. The corners of the display are trimmed, making it almost impossible to break the screen.

The corners of a smartphone, smartwatch or any other devices are the most dangerous places. If your smartphone falls on one of the corners, the display is 100% likely to be broken.

Moreover, the display of Amazfit Ares is covered with Gorilla Glass protective glass, so it won’t scratch.

Of course, if we’re talking about a protected smartwatch, it has water protection. Amazfit Ares is water resistant to 5 atmospheres.

The strap is silicone, but it seems to be detachable.

On the right side of the dial, there are three physical buttons. The display is also fully touchable, so you can use it to control the watch.

On the back, as usual, you will find a heart rate sensor and charging pins.

By the way, Amazfit BIP has a display of the same size – 1.28-inches, so you can roughly imagine how the new Amazfit Ares smartwatch will look like on your hand.

It seems that all Amazfit smartwatches work on the same operating system and user interface.

However, there are some interesting functions of the new Amazfit Ares smartwatch.

The first function is BioTracker PPG heart rate sensor. The sensor constantly monitors the heart rhythm 24/7 and informs you if any problems with your heart are detected.

In addition to the previous function, the new watch has PAI. If you have Amazfit GTR or GTS, you already know about this function. PAI is a special algorithm that monitors your heart rate and generates information about the user’s activity based on it.

As you know, just counting the steps is not the most effective way to track human activity. The new PAI algorithm tracks the heart rate during exercise, so it more accurately determines activity.

Another useful function of Amazfit Ares is Firstbeat. It is a development of a Finnish company, which helps professional athletes very much. Again, based on the heart rate, the smartwatch monitors oxygen, energy and other parameters. Using this information, the athlete can monitor the efficiency of the workout as well as the recovery process after the workout.

By the way, Amazfit Ares watch has 70 sports modes. Yes, I wasn’t wrong for one zero at the end. Indeed, the new smartwatch has sports modes of parachute jumping, running in the mountains, and of course the usual running, cycling and others.

How Long Does Amazfit Ares Last?

As for the battery life of Amazfit Ares, the new smartwatch is equipped with 200 mAh battery that lasts approximately 13 days on a single charge when actively used.

If you forget the basic functions I mentioned above, the watch can run for up to 90 days.

By the way, I forgot to say that the Amazfit Ares watch is equipped with GPS and GLONASS. If you turn on the GPS, and do not turn it off, the watch will work no longer than 23 hours.

When Amazfit Ares Will Be Released?

As I said at the beginning of this article, the price and release date of Amazfit Ares have not yet been announced. However, given the fact that we already know all about the new smartwatch, the release will take place very soon.

Soon Amazfit Ares watch will be available at popular Chinese online stores such as Aliexpress, GearBest, Banggood and others.

What’s The Price of Amazfit Ares?

As for the price, the previous rugged smartwatch Amazfit T-Rex costs $140, and the price of Amazfit GTR and GTS is from $120, I think that Amazfit Ares will also cost up to $150, especially at the beginning of sales. In a few months, the price could fall by several tens of dollars.