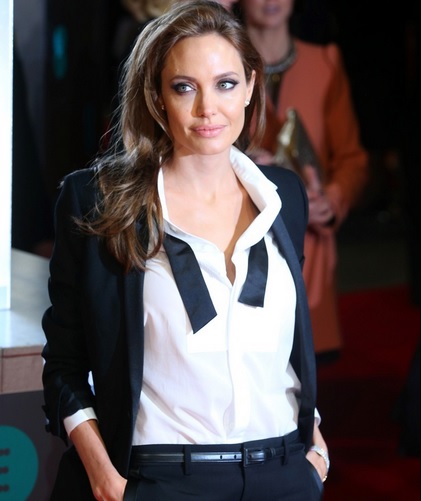 Hollywood actress Angelina Jolie knows how to attract attention of the public. She have not attended social events, so that her appearance at the awards ceremony of the British Academy of Film and Television Arts (BAFTA) created a furor.

Jolie appeared on the red carpet of Brad Pitt. Star couple looked elegant and harmonious. 38-year-old actress chose a classic pantsuit from Saint Laurent, and her partner – a suit by Valentino. As noted by fashion commentators, actors looked very harmoniously, not least thanks to the well-matched, very similar costume.

Angelina decided not to miss the moment and while the press with interest began to discuss it with Pitt, introduced on Youtube first trailer of his new film “Unbroken.”

Premiere is scheduled for December (around Christmas) in 2014, and judging by the roller, tape promises to be quite fascinating. Recall, the movie based on the book by Laura Hillenbrand, “Unbroken: A History of survival, resilience and redemption during the Second World War”, which tells about Louis Zamperini runner, participated in the 1936 Olympics.

Judging by the roller, Jolie managed to persuade himself Zamperini star in several scenes.

The main role performed by British actor Jack O’Connell. In 1941 he joined the athlete USAF. In April 1942, during one of the military operations plane carrying the Zamperini, fell into the Pacific Ocean. Eight out of eleven crew members were killed. Zamperini and two other soldiers were drifting on a raft a few weeks. On the 33th day, one of the survivors died. After 47 days of drift remaining two were captured by the Japanese. Zamperini was in captivity until the end of World War II. After returning home a man faced with a serious problem – alcoholism and post-traumatic stress disorder. However, Louis was able to overcome that, too. Later he spent something like seminars for those suffering from alcoholism.