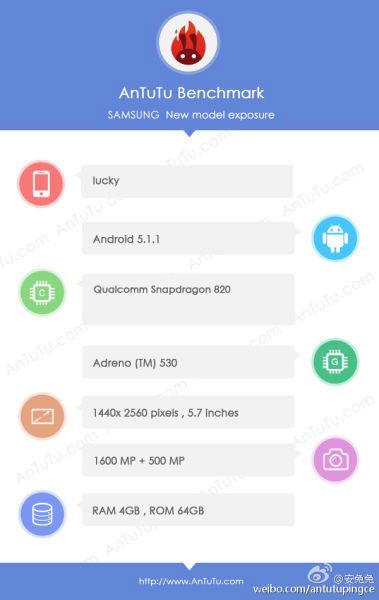 Just yesterday in the Geekbench benchmark was discovered Samsung smartphone, code-named Lucky-LTE, which is based on yet unannounced Exynos 8890 processor with 8 cores, clocked at up to 1.4 GHz.

Despite the ridiculous frequency of its processor, the smartphone has shown impressive results, both single-threaded and multi-threaded test Geekbench. Such high results gadget made us assume that under the name Lucky-LTE is hiding Samsung Galaxy S7. And today we have yet another proof of this theory. The fact that the benchmark AnTuTu showed a smartphone with a similar name Samsung Lucky, which, unlike previous devices based on the Snapdragon platform with 820 Adreno 530 graphics.

Like Lucky-LTE, the novelty is equipped with 4 GB of RAM and running the operating system Android 5.1.1 Lollipop. Benchmark found that the smartphone installed 5.7-inch touchscreen display with a resolution of 2560h1440 pixels, 16- and 5-megapixel camera, and 64GB of internal memory.

It is perfectly combined with the previous rumors that Koreans are working on several modifications Samsung Galaxy S7, one of which should get exactly the 5.7-inch touchscreen. It is quite possible that yesterday’s Samsung Lucky-LTE and Lucky today are versions of this smartphone platforms Exynos and Snapdragon.