Chromebook: how to construct computers Google, where there is only a browser 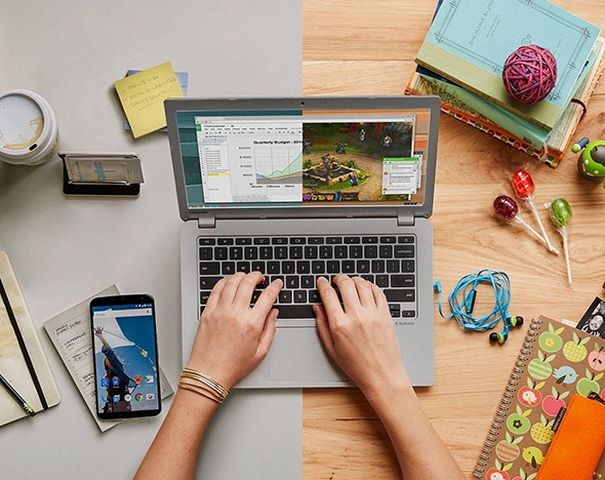 After several weeks in the company of Chromebook 13 with the responsibility we are willing to tell you what feels a person working at a computer that is running a single program – the browser Google Chrome.

The obvious truth, and the truth of life: for $ 300 you can not buy a good laptop. Beautiful advertising can paint the Chinese laptop for 10 000 rubles. like some MacBook Pro, but in fact netbooks (and in fact a full-fledged laptop for the money can not buy) as one – with a small screen, a weak “iron” and clumsy design. A few months after the purchase, they begin to slow down and cool. Even the process of surfing the Internet, for which they were created, it becomes unpleasant. The joy of buying inexpensive miracle of technology gives way to disappointment and grief the money spent.

Steve Jobs during his presentation of the first netbooks iPad predicted a quick death on tablet screen. So, in general, it happened because of three hundred dollars can buy a really nice plate – on Android. Especially if you do not hesitate to Chinese products.

But if they wanted to name plate “workhorse” is impossible – it is better suited to address the urgent problems “on the fly” and entertainment. The notebook he is not yet able to replace.

But with some justification to do so may Chromebook, created in the bowels of the corporation Google. These light, thin enough, pretty good for the type of device to cope with a variety of tasks. And they are able to operate on battery power for more than ten hours, and for a good model will have to pay all the same with a small 300 dollars. This is a computer, we will tell you the example of Acer Chromebook 13.

Google Chromebook presented in May 2011 at the conference Google I / O, and a few months later they went on sale. The first reviews were mixed: at a comparable price to conventional notebook devices from Google is not enough to have a number of serious constraints arising from the operating system, so more and inferior technically. Later, through the efforts of Asus, Acer and other companies in the market did very decent Chromebook at affordable prices and their purchase finally made sense.

Before buying a Chromebook, answer yourself a simple question: if you need a laptop for anything else other than surfing the internet and all that can offer online services?

If not – welcome to the world of Google.

The main slogan on the official product page Chromebook states: “More than a laptop.” Marketers’ search Empire “is a bit disingenuous. Rather “More than a netbook.”

Chromebook – the quintessence of the concept of netbooks, the idea of “internet computer”, carried to absurd perfection. A full-featured laptop with a view, where, however, there is nothing but a browser Chrome.

Chromebook run on Chrome OS, its own operating system from Google, based on Linux. And here you can not install the program. Generally. The point is limited only plugins – specific extensions for Chrome.

For the first time sit at the Chromebook a little scary. The transition to the new operating system is comparable to the yield from the comfort zone. People in general are not very willing to change one platform to another: if a person bought an iPhone once, is likely to buy it again in a year or two.

But the input threshold at Chromebook is very low – and this is one of its main advantages. There are no familiar “Start” button on the desktop no audio icon (except the lonely icon of the same Chrome), just do not get lost in it.
On the other hand, from such a minimalist slightly sucks in his stomach: how can I work on a laptop, where, apart from the browser, nothing at all?

And then a few hours later to replace this gloomy thought comes another: Chromebook – a demonstration of a cloudless future cloud services.

The Internet has it all – the idea Chromebook illustrates perfectly.

Google offers a wide range of its online services, so that all you need to convert the Chromebook into a normal computer – it’s just the Internet and an account with Google. Yes, to use them, you do not need to buy a Chromebook, for him there are no exclusive or extension programs. Another thing is that the choice of the user computers from Google simply does not – still rely on the Internet.

And it’s not as painful as it might seem. It is necessary to dial a text file – go to the «Google Documents” free analogue Microsoft Word. Create Table – «Google Spreadsheets”, respectively. The Chromebook is usually very little space, an average of about 16 GB. Therefore, the user is actually forced to use cloud storage. Again, no need to buy Chromebook to realize the benefits of cloud, but many hard to force myself to keep anything on the Internet, when available to have a hard drive for a couple of terabytes.

All these services can be opened in a single click from a special menu at the bottom of the screen. Functionally, they are not much inferior to the standards of Microsoft, I typed and formatted this article on Acer Chromebook 13 without any problems. In addition, the files are synchronized in your cloud on Google’s servers in real time: typing on a computer, the letter in a text document appears on the screen of another, which opened the same document, almost instantly. The need to constantly save files, sending fresh version of itself to e-mail, is not necessary. You can even edit documents on your phone, even on the tablet. It’s really good, and I did not notice this until I began to use Chromebook.

You can configure the mail and the browser, there is – listen to music (“Yandeks.Muzyka” or Google Play to your service) and watch videos. You can even play games – in-store applications Chrome them a lot of free puzzles on a series of “three in a row” to the indie masterpieces like Bastion.

The only serious problem – the lack of Skype, so I had to put a smartphone, where it was launched. But, according to rumors, Microsoft is working on a web-based version of its messenger, that all just at hand.

In Chrome and sync all your passwords, tabs and bookmarks, both from a mobile device and a PC.

Photos from your smartphone automatically loaded into Google+, store them in the memory of a PC or Chromebook is not necessary: go to the cloud, look, if you want to download the all simple.

But here lies the main drawback Chromebook: it is completely useless without a network connection. That is all. Start something here you can not offline, so no Wi-Fi at hand (or 3G, there are models with support for mobile Internet) is simply cute laptop with a pleasant Chrome icon on the back cover.

Unusually good news came at the time of this writing.

In April, Google Chrome has added support for Android-applications. With simple manipulations, you can run any application on the Chromebook with this operating system. Service is still in the testing phase, and is intended primarily for developers, but it symbolizes the fact that the integration of Chromebook and Android for Google – it seems to be one of the pillars of the vision of mobile technology. So now you can play brazure Candy Crash Saga and Monument Valley.

Little about the Acer Chromebook 13. The only serious drawback of this Chromebook – screen. It seems that he came here from the beginning zero: no angles, soap picture. Of course, it is foolish to expect for the money IPS-matrix and an anti-reflective coating, but, nevertheless, I would like to eyes started to tear a couple of hours at a laptop. But the big screen – as much as 13 inches, which distinguishes Chromebook 13 from earlier models Chromebook.

Everything else is done surprisingly cool. Most pleased trackpad he reacts to finger movements. Very close to what Apple does in its MacBook, and it’s a huge compliment.

In addition, the battery easily lasts for two working days. That’s good, because the Acer Chromebook 13 is lightweight and compact enough to be able to carry it home from work and back without ever dragging with the charger.

Chromebook often want to compare the MacBook Air from Apple, what to do, of course, not worth it. Air – expensive device is a top-class, clean and quality for the big money. Chromebook designed for everyone. Trite – they can afford a much larger number of people.

Chromebook – a funny thing. Cut off from the operating system all, leaving only one browser, Google postponed the “pruning” on the Internet and force the owner to use them. And fun is what it worked.