Da vinci’s demons, the protagonists talk about their research without borders 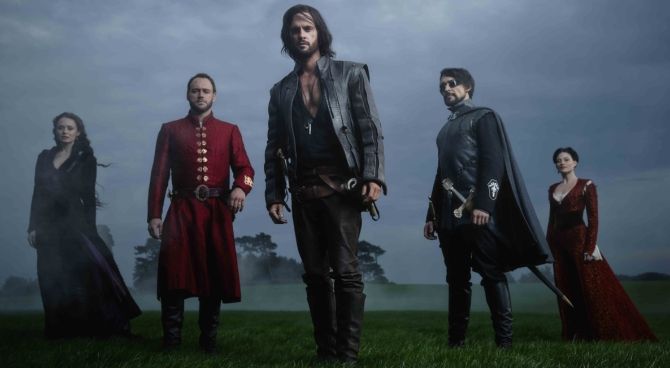 Tom Riley, Blake Ritson & Co. reveal the behind the scenes of the series signed David Goyer.

Leonardo and Riario, Lucrezia and Ima, four aces that will be ‘at the center of the new season of Da Vinci’s Demons , the series created by David Goyer – screenwriter of The Dark Knight Rises and The Man of Steel – which is preparing to usher in a new season very promising …

We met the respective performers ( Tom Riley and Blake Ritson, Laura Haddock and Carolina Guerra) on a sunny penthouse in New York to try to find out more ‘and the surprises are not missed. The same short-all of which will enjoy on Fox from 7 April 2014, and for ten weeks.

U n long chase that will bring ‘a young Leonardo Da Vinci and his nemesis, Count Girolamo Riario, nephew together cruel and faithful of Pope Sixtus IV, far from Florence, as confirmed by Tom Riley: “We went everywhere with our trip , beyond the Italian borders, but also on an emotional level. The biggest change was to the New World, where I, and Blake arrive Carolina, in addition to even touch other cities’ Italian as Genoa, Naples and Rome. “

A significant expansion for the series, after the first eight episodes last year, but not only for the series. “Everyone we will push forward the boundaries of our ‘safety zone’ – confirms Blake Ritson, the intriguing ‘Villain’ – almost to reach a breaking point physically and spiritually, all’avvicinarci to a dark side by many forms. ” ‘Sara’ a race to the of the ‘Atlantic. And we’ll have to make covenants also uncomfortable that promise to reveal interesting background, “he adds, with the intention of clarifying the ideas to the public. Or just to encourage him further to find out what you’re talking about.

“Yes, perhaps’ the most ‘interesting of the new season – Riley joins the chorus, clarifying something – and it’ a merit of David (Goyer) who has been able to create unexpected situations from creation and from the rupture of relations between the characters, which will allow us to learn much more ‘of the same. Much more’ than what the public expects. “ 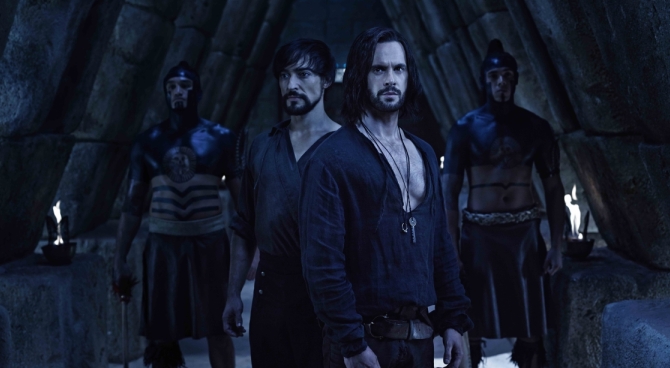 “A beautiful gallery of new characters,” and it seems that in which will certainly not be indifferent to the beauty of the two protagonists, ready to present a preview in the meantime. Firstly Carolina War, the interpreter of “Imacama, which in ancient Quechua language means ‘where does the power’ … A very powerful woman, in fact, on a spiritual level – tells the Columbian – with the main concern of protecting its own people , the children of the sun – as they were called Inca Empire – the threat of the white man, which seems to be the only one aware of it. But you must protect them with the Book of Lamine, all of whom are looking for and also you need . tighten at the point of strange alliances with them, to try to take advantage of the help avoiding the risks. “

“For me it ‘was an opportunity to go back in time, for seven years, something that has made ​​Lucrezia what’ now – tells the interpreter of woman contention between Da Vinci and the Magnificent. – It ‘s been interesting finally be able to clarify his emotions; without gistitficarle, but at least being able to have a true and deep understanding. ” “The male characters were gorgeous – adds the blonde Laura Haddock talking about the work of Goyer – but in the first season eravano only three women, and it ‘was nice to read that in the script there were other female characters, strong. This gave a bell ‘balance to the series, even in the differences in the writing of the characters. “

Expect, therefore, “a dig, episode after episode, all the characters on the trip created by David” in a new series, “though it may seem like a cliche ‘, really made ​​it possible to expand the look of all the characters and events of the initial season. “Riley and I agree Ritson on this point, as well as in the joke about an experience that united them even more ‘. Thanks also to the many memories that will bring with them the set. Scenes from aquatic and underwater – many, perhaps too many (seen as he speaks good Blake: “The whole series revolves around being wet. Imagine every possible situation that could be wet, there ‘was. We’re still squeezing water from our clothes! “) – inventions that characterize the main character, whose interpreter admits as he” could not do without it, people love the toys. ” “We’ll have yet,” he adds on, “at least half a dozen in the second series I’d say. Ed and ‘interesting’ cause Leonardo does not necessarily built the machines that basically drew and planned, but just for the fact of having been able to do, the ‘we wrote. ” “A wonderful job done by the guys in the set cotruirle effectively”, is keen to highlight Ritson, who admits: “I spent minutes touching and surprising that they really really did, with such precision and attention to detail. Fact helped us also in acting. “

But the brackets joke – in which Tom arrives to reveal that for the next series, “we’re going into space,” and that this “there will be ‘a very important death” – gives way to the concluding remarks of the two antagonists. Tom Riley, the thirst for knowledge and its risks: “David was fascinated by up to where I can bring the thirst for knowledge and what each would do with the knowledge gained. Siuramente Leonardo for the investigation into whether ‘more’ important than any other and also what his research in the book of the laminae and ‘a search for answers. But even for him, as for Ima and Riario and’ above all a tool to change things, acnhe if everyone wants to do it differently and has a different thirst of knowledge. ” But Blake Ritson, which adds something to the expectations of the public on the clash between the two: “I loved the alliance between Riario and Da Vinci, joined by a very similar research, but from completely different angles at the ideological level. Too, because ‘the two learn something from each other … “.