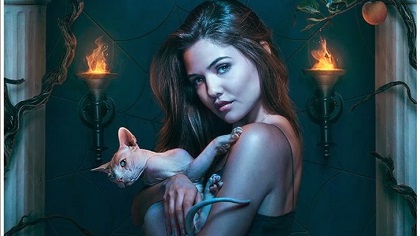 Danielle Campbell, who plays the witch Davina in the series’ original »(The Originals), in a recent interview to share some thoughts about how her character has changed in the second season, and explained why Davina collaborating withKlaus, and does not try to kill him. 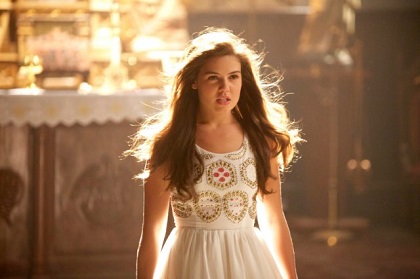 If we compare the first and second seasons of the series, as Davina changed?

It is very grown up, become much stronger, not so trusting. Now she decides to protect loved ones. Yes, Davina has become stronger and more mature, and for me as an actor, it is very interesting that her face.

Have things changed much in the storyline Davina, if you compare with what you knew before filming?

We never know what will happen next. If the writers and tell us about the future of the character, just can say only one thing – everything can change. Initially, I did not have a certain understanding of what will become Davina. Much depends on what will be a series of shot as we play. I like that all the heroines in the series are strong, have a significant impact on current events.

For those heroes who survived the first season, things might have turned out differently. There were moments when you doubt that Davina survive until the end of the season?

Davina because died in the first season, so yes, it happens. Her story was a surprise for me, and it was very interesting to watch how the story turns. Davina is back and it was a great experience for me. In our series, one can not feel completely safe.

The second season focuses on family reunification. Davina confident in his strength?

It is interesting that it is only now realized how to use his power. It was only after the beginning of the relationship with Colom she discovered the dark magic. It becomes stronger through understanding of their abilities. She is learning to use them, control them, to carry out his plan.

In the first season Davina was a girl who was just trying to survive, but at present it is already trying to figure out how to use his power. That of played you like more?

To be honest, I love her character. Davina has gone through a lot of suffering, and now knows exactly what he wants. She always has a plan. Self-confidence – that’s what makes my character more mysterious character. On the set of I liked everything, especially Davina quirks in relations with Colom, and in the first season – with Michael.

In the first season were only hints at possible romantic relationship Davina, but in the second there was a sympathy between her and Colom. As you work with Daniel Sharmanov?

We Cola and Davina interesting relationship. They are constantly pin up each other. No matter how it tried to keep to themselves Cola, it does not work. Fun to watch as they flirt. Daniel – an amazing person. He’s incredibly talented, constantly joking on set. I am happy to work with him.

Are you surprised that Davina still communicates with Colom? He did and she lied.

Davina does not trust people. To break down the walls, lined up by itself, it took a while. She does not want to be in the same situation. If Number lied Davin, hence, the wall between them fell. In fact, it’s just a bad influence of his mother. Over time,Max falls in love with my character. She knows it, and gradually between them there is trust.

Davina for a decisive moment. If she let her emotions get the better, fall will be very painful. Personally, would you like to see how far it can go?

It will always be careful in choosing the people you can trust. She does not want to hurt their friends and family. But I like that Count showed her dark magic. I would like to see how far Davina will go in the study of dark forces.

After Davina met with the whole family, whether changed her attitude to Klaus?Does it became to understand it better or still wants to kill him?

Davina will work with Klaus, they have a more serious problem – Esther. Most do not remember why Davina so evil Klaus. He is killing people on a one-two. Of all our heroes Davina more humane, it does not take such a manner. She lost a loved one, the only one who cared about her, and now he wants revenge. Davina is well aware that if Klaus is alive, all of her friends are in danger. Hence all hostility. At the same time, my character knows that in the circumstances it would have to come together with Klaus.

You are proud of the fact that Davina has not forgiven Claus, how it could have happened in any other series?

I am proud of. All so accustomed to vampires, to the fact that all the killings go with it … Best friend Davin, Josh – also a vampire. And she understands that they need something to eat. At the same time for her murder is unacceptable and contrary toKlaus. All actions of my character are aimed at helping people. And that’s fine.