The explosion at a factory in Kunshan City China : 65 dead, 150 wounded 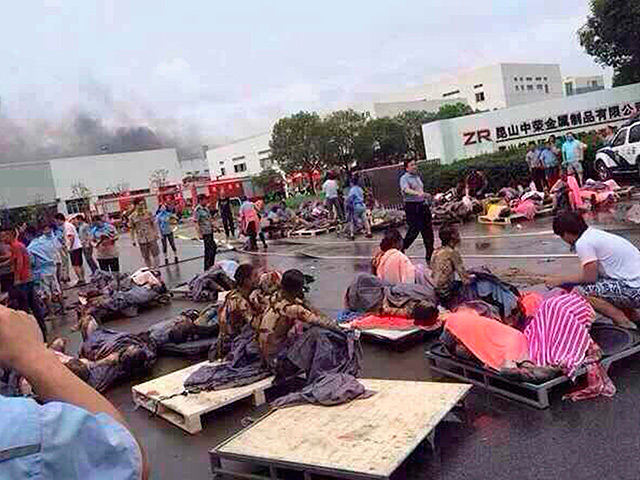 Powerful blast on Saturday morning at the Chinese factory, manufactured wheels: According to Xinhua , at least 65 people died and 150 were injured. Many of the victims in serious condition due to extensive burns.

The incident occurred in the Chinese city of Kunshan City, Jiangsu Province in the east at 7:37 am.According to Reuters , the company’s plant Zhongrong manufactures metal parts for the American company General Motors, as well as other customers.

On-site work police and rescue workers, the number of victims to be confirmed. China Central Television (SCTV) showed footage from the crash site: rise above the building of black smoke, dozens of victims are entered into ambulances.

Xinhua citing microblog city police reported that the preliminary cause of the explosion was the ignition of metal dust on the shop floor polishing.

At the moment of the explosion in the workshop, there were about 200 workers.According to CCTV, about 40 people were killed instantly.

Kunshan is located to the west of Shanghai and east of the city of Suzhou, ITAR-TASS reported.