Conspiracy thriller “Utopia” – a daring project of the British production of Showrunner Dennis Kelly, who, to convey to the audience their thoughts, using all necessary means to him, without looking at the strict censorship, in contrast to their overseas counterparts. A thought sounded far from trivial. What began as a bizarre delusions with essential attributes like slow fall from a window or a figure dressed as a rabbit turned into a witty argument about human nature. Although the stated theme as much complicated as there are beaten, the creators of “Utopia” coped brilliantly with her ​​studies.

The starting point of the writers made a very real problem of lack of resources. This motif has become a major driving force of the plot and creates a situation exaggerated to varying degrees. For example, the reduction of natural food and replacing it on GMOs – the reality of cities, but the creation of a vaccine, polls sterilizing virtually the entire population of the world – rather unattainable fantasy.However, the heroes of this deadly battle for the fate of mankind appear iron motifs, and the creators of the mad world of “Utopia” – a clear reference system.

In a coherent concept of the series woven tough questions about what is ready to go relatively influential people for the sake of “better future”, and where is the boundary of what is permitted. Give the mind and the outstanding quality of the right to decide the fate of even her own child, not to mention the billions of other people.How propaganda works and what scheme develops public panic. Who is really pulling the strings and stands at the helm of a big political machine. And perhaps the most important issue suddenly becomes a classic, from Dostoevsky: “The thing I trembling? ..”. No wonder imperishable novel by Fyodor not often mentioned in the course of the story. 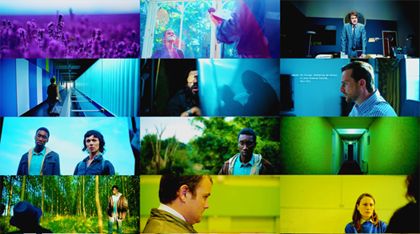 Interestingly, the Dennis Kelly, Mark Eldridge and Claire MacDonald managed to pack reflections on important issues of modern society in the cast cover of comics style and exaggerated violence. This visual trick easily attracts the viewer, and the age limit only fuels the interest. However, dynamic chases, gunfights blood, torture, genocide and inhuman experiments hiding all the painful theme of the XXI century: identity, loneliness, trust, choice and responsibility. At the same time the British, who never denied feelings common cynicism, humor and action, are not engaged in highbrow mentoring. They themselves shrug, leaving most of the applications open question. Like, think for yourself, decide for yourself.

Also, the authors, despite the criticism of excessive violence, not addicted vyshibaniem brains. They are great to learn the lessons of modern television: show shot in the head in the sham-style, like Quentin Tarantino, you can, but to kill a rabbit in front of impressionable audience can not. Bring to flow though a dozen secondary characters – please, but with the main – careful. Although the writers did not hesitate, and the central characters poistyazat and even put a weapon in the hands of children, making them not only objects, but also a source of violence.However, demanded the laws themselves “Utopia” …

World created by Dennis Kelly and his team masters art pieces – deadly, uncompromising and tough. It is the world whisper, rustling, diabolical laughter skewed faces, closed doors, dim rooms and, on the contrary, unbearably bright colors. Color and soundtrack are running the show: a poisonous yellow bag is a standard set of killer mercilessly green walls are not placated, and defiantly blue sky and look to fall on the heads of the unfortunate victims of “Utopia”. This juicy nightmare created not only to annoy the optic nerve and subsequently become the bible for desktop emerging artists and designers. Each stylistic feature of the show is working to create a tense atmosphere. 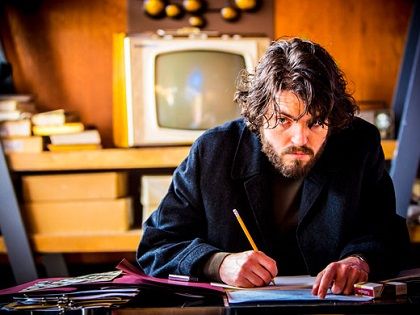 Watching “Utopia”, it is impossible to escape: she keeps in tone, not once cutting the ground from under the feet of their fans unpredictable turns. The second season of the viewer is already beginning to think that solved all of its codes, when suddenly a cozy family dinner turns into a bloodbath, and a loving father shoots his own children. And all this is a more important goal than wanton epatirovanie viewers.

However, the writers do not forget about the specific black humor, which is downright blooms to the beginning of the second season. If the first chapter tried to prove that the authors here is not a joke to joke and at times was excessively severe, the second was the concentration of sarcasm. The creators of the TV show so inflate the degree of drama going on, and the absurdity reaches such proportions that the characters begin to behave like the characters stupid spy thriller. For example, a chase scene for mercenaries connected with each otherChristian and Tony followed by seizures in the last ridiculous to tears, exactly as hallucinations or Becky Wilson’s comments regarding the improved “Janus”. 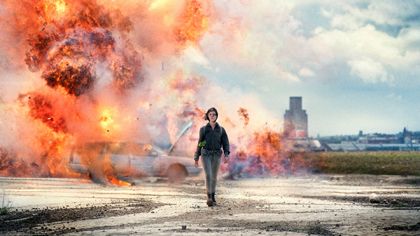 An important function in “Utopia” executes the Ole Bratt Birkland. Through his work, along with the efforts of art directors, series becomes a spectacle that is not a sin to be reviewed. Ole choose camera angles so that the story presented on the screen at all realistic look someone’s obsessive vision. The camera then pulls faces and unnaturally curved shapes the characters, making them almost unearthly beings, it goes so far that we are turning the pages of a graphic novel, which is about to appear with the text field.

But the most interesting and important in the project is still looking characters.Although the success of “Utopia” is due more intriguing history than strong heroes before us is a whole galaxy of little cartoonish, but not stereotypical images. Among them: the eccentric duo with brutal killers torturous devices, like a mad pirate Wilson Wilson, desperate young thug Grant. In general, the triumph of colorful misfits. The procession is headed by paranoids obsessed Jessica Hyde – cold-blooded, strong and patient on his head girl with an androgynous appearance, unruly curls and huge eyes fixed on the lifeless face.

Such an ensemble cast can not be forgotten, though the person involved in the project – absolutely nemediynye. They look convincing at all, that would not do, in the theater or replaying giving deep personal drama. For example, Fiona O’Shaughnessy embodies sacrifice paternal love with the manners of a psycho, injured since childhood, has become a consumable item in a big game big corporation, so striking that it is impossible to imagine anyone else in its place.

“Utopia” – a unique, provocative and fresh phenomenon, with all the contradictions and flirting with the audience prove their worth. Authors who risked seriously ridicule many of the stereotypes and challenges of our generation, could not cross the line and not to offend anyone. It perfectly combines textured characters and twisted story, excellent humor and philosophical reflections, wade tingling musicTapii Cristobal de Veer and flashy colors, fiction and reality. In this case, Dennis Kelly and company have created so rich, stylish and original project that he will still be out of reach for the top of the other series of this genre.