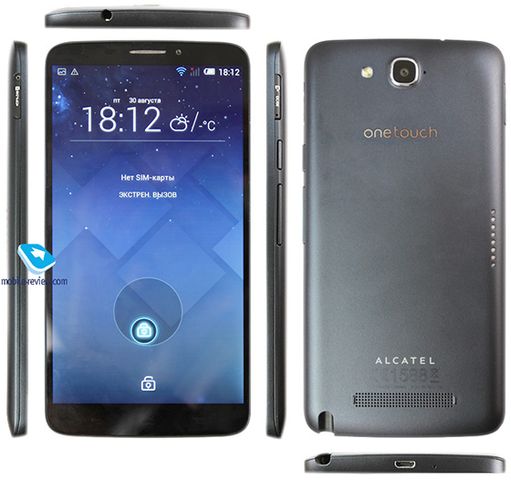 The first generation of Hero showed exactly one year ago at the IFA 2013, he became fablet pretty interesting device in terms of price, but has not won much popularity – especially against the backdrop of a large number of competing devices. In 2014, Alcatel decided to not just play the card quality device with an acceptable cost, but to do what was once famous for HTC – create a device according to the dreams of geeks. Aluminum body, a fairly large battery, stylus in the case, quality headphones included, various covers, including that with the LED-screen TV. All together creates a very good impression about the device. But most importantly, it’s fast, though built on “old» MediaTek 6592.

Ranking Hero 2 complicated, it is an attempt to create a flagship and take into account the public unconscious dreams. Grain of common sense in it, but the product turned out quite expensive for the brand Alcatel. He is much cheaper than anything that offers the same HTC or other companies in this segment, but more expensive than from Chinese companies. However, in the latter there is no such body, a set of accessories and thoughtful menu with its own settings. All this is worth the extra money, but the offer turns interesting and balanced.Let’s take a look at the capabilities of the device. 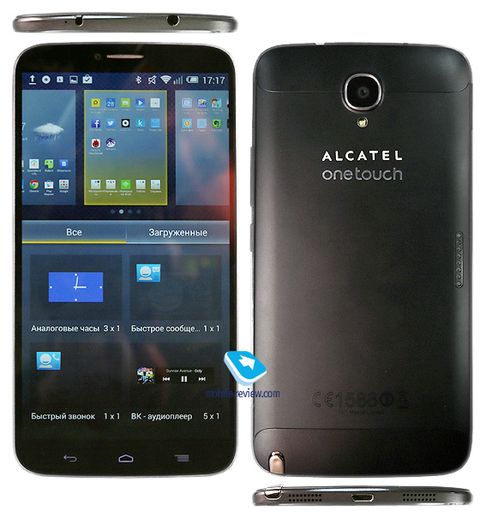 Telephone big – 160.5h81.6h7.9 mm, weight 175 grams felt in his hands. Metal cools the palm, and it is felt that it is not stingy – everything looks safe, forever. Such a sense, both from HTC One M8, no, HTC flagship perceived differently, it prettier. But in Alcatel Hero 2 has a certain charm.

On the right side is the volume rocker, right there – on / off button. On the left side – tray microSIM-cards, and on the other side – the memory card slot. On the back you can see the surface of the 13-megapixel camera plus LED flash.

Above the screen – front camera, to the right – an indicator of the event, as well as a light sensor. Under the screen – three touch keys.From the standpoint of assembling this apparatus appears as a monolith. Some may not like the weight, but this is the price for aluminum case.

The screen has a diagonal of 6 inches, resolution – 1080h1920 points matrix IPS, covered with glass Dragontrail, having an oleophobic coating. Dirty machine is not in the sample faster than Lenovo Vibe Z2 / Z2 Pro. The quality of the picture in the last generation of smart phones Alcatel has always been a decent picture here is also good, but it lacks a little brightness, vividness. Good contrast, but the brightness is clearly saved, apparently trying to get more time to work.

Built into the barrel should not confuse you. He looks like such in Note 3, but no additional layer is not displayed, it just sticks that can not exactly draw or write. The bundle is a pair of applications (calculator, and notes), where you can use a stylus. In principle, any pop-up menus, as in Note 3, no specific applications and the like. It’s frustrating, because it makes the stylus purely optional and optional accessory. 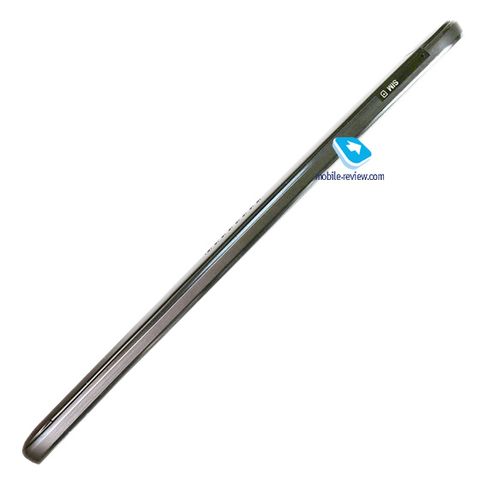 Battery capacity – 3100 mAh, which is typical for this kind of devices, for example, Philips i928, built on the same chipset, 3000 mAh battery, and the screen also with a diagonal of 6 inches. Claimed battery life is decent – up to 10 hours of talk time on 3G, up to 380 hours of standby time, up to 60 hours of music playback. It is quite exactly the same as that stated for Philips i928, subjectively and screens are similar. Therefore, we can say that the actual working time will be a full day, about 6-7 hours of video playback at maximum brightness. A full charging time is about 3 hours. Not a champion and an obvious fault in this lies on the chipset.

The device 2 GB of RAM, built-in – 16 GB (12.9 GB user available), plus you can install a memory card up to 32 GB. Restriction is strange, because there a cheap economy, and a large capacity card – not exotic and are inexpensive.

MediaTek chipset used 6592 has 8 cores, the maximum frequency – 2 GHz. It is well known from other phones decision, it shows a lot of parrots synthetic tests, but in practice very voraciously against batteries. In my opinion, this is not the best choice. See the results of the tests. 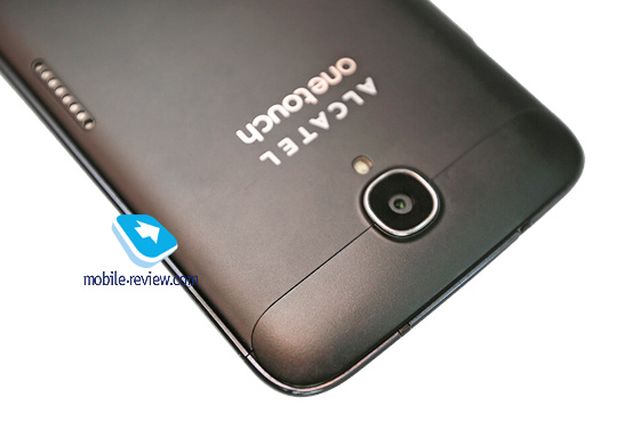 Regular 13-megapixel camera, examples of photos you can see below. The quality characteristic for such products.

The model supports 4G, also has NFC, Wi-Fi, BT 4.0 – in a word, a standard set of technologies, without any special features. 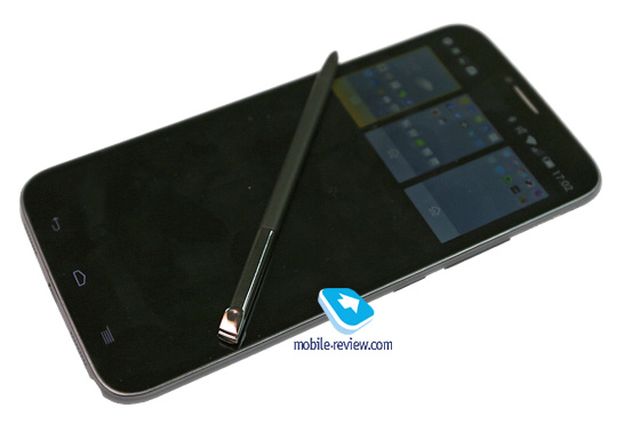 In Alcatel trying hard not to change the standard Android, but still bring their changes, in particular, added features that we see in the line of Galaxy Note. So, I like that the company is working on a multi-tasking, it is the first after the Note showed split-screen for a few windows, it only stays in this unit. And on the home screen icons appeared in some box in the lower right corner. It’s kind of widgets, rather than simple icons. So you can spend on the icon up, and will open mini-box recorder, player or something like that. The idea is very simple and elegant.

Everything else remains traditional – there are programs for synchronization and backup data, a DJ stand in a separate pre-program.Stylus couple of programs that do not cause much excitement, it’s not exactly Note with its capabilities. 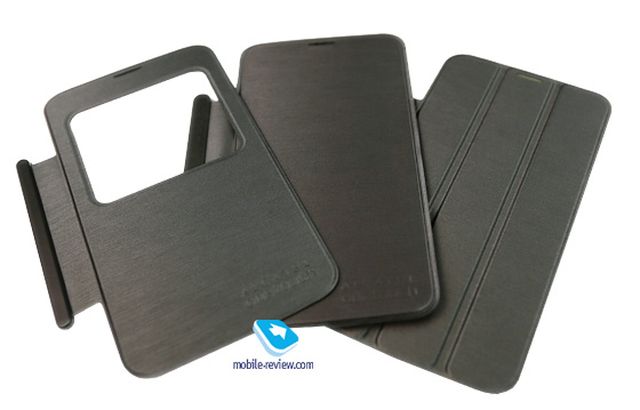 Cost Hero 2 will be about 17,990 rubles in Russia that expected for a product of this class. Not cheap, but not prohibitively expensive. But there is good news, one of the operators of this model will cost 12 990 rubles, which looks much better deal that stands out from the other Chinese flagships. Clearly, this fablet and he plays in a small niche, it does not have problems to collect huge sales, this just is not necessary.

In Alcatel promise that this year the market will be additional accessories. For example, look at the cases that are similar to those of the Note – this is the usual case-book, cover with a window, as well as an indoor cover with OLED-screen TV. He contacts and anchored to the body.

I and the impression remains that the Alcatel trying to transform itself into HTC from the past, paying attention to the design, materials of the housing. And here there is a sense of ambivalence – the design is different, as are the materials, but the technical filling not all correspondence. For example, where a silly restriction on the amount of memory cards? The product proved to be interesting, and if you need a relatively inexpensive fablet, then it can be a closer look. Although really cheap fablety this winter will cost about 3000 rubles.What makes this segment and the product itself is quite different. 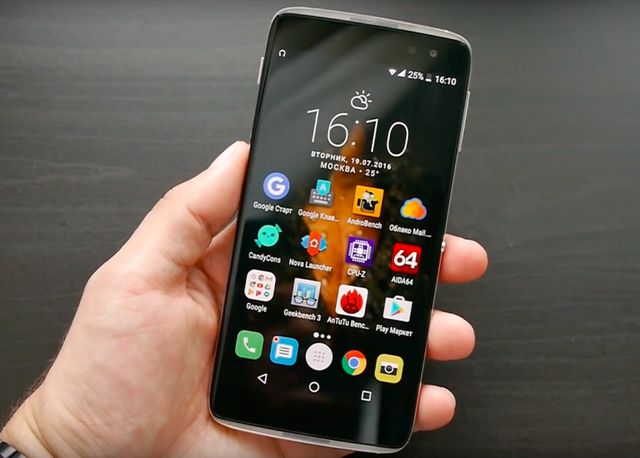 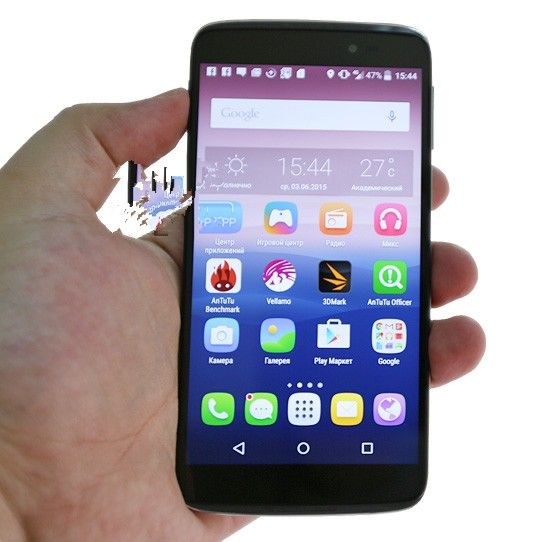