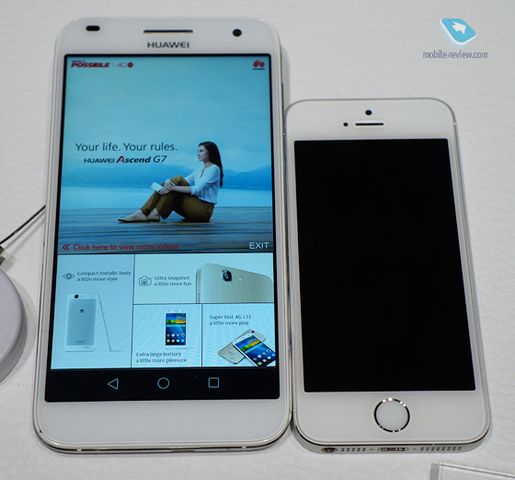 You know, usually the official positioning of the device is very far from reality. Companies invent various non-existent category of users who may be interested in one or the other device. Read and wonder. But in the case of the G7, Huawei were right on target. The unit represented by the head of the German office and that’s how he described the model: “Not every one of us is willing to pay a tidy sum for a smartphone, but we all want to get a quality machine. It is for this category, we released our G7 ».

Externally, the Huawei Ascend G7 reminds me of a tablet MediaPad X1 and iPhone 5s. Not to be unfounded, quote below comparative pictures with 5s, so that you could see yourself in my words.

And although I do not approve borrowing design, but in the case of Huawei are not so easy, because they can make a unique design of the device, but spend a lot of money or just make it ugly or impractical. Therefore copying iPhone 5s there is nothing wrong, because this machine is really nice appearance and practical aluminum case. It is these features and borrowed from him Ascend G7.

The model will be available in two colors – Moonlight Silver and Space Gray. 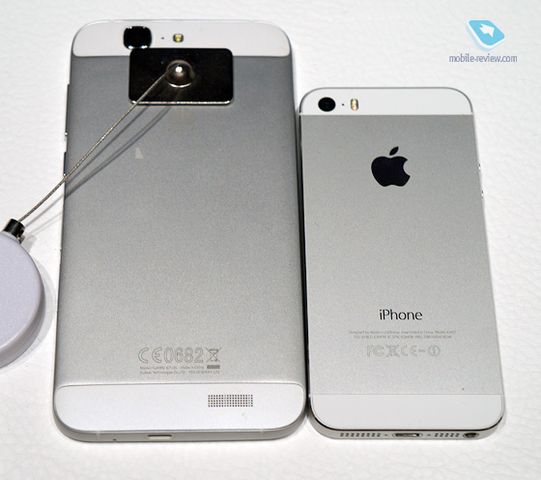 Because of the long diagonal in the smartphone is pretty impressive dimensions, the same iPhone 5s looks just a toddler on his background. At the same time, Ascend G7 turned out pretty thin, its thickness is only 7.6 mm, and weight – 160 grams.

Screen I can call except that good at such a diagonal already noticeable pixelation. Also it is not all right with angles, rejecting the image dims.

The device will be running Android 4.4.2 with a proprietary shell EmotionUI 3.0. The main feature of the shell – rounded shapes. Shell with screenshots you can see the “first glance” at Mate 7. 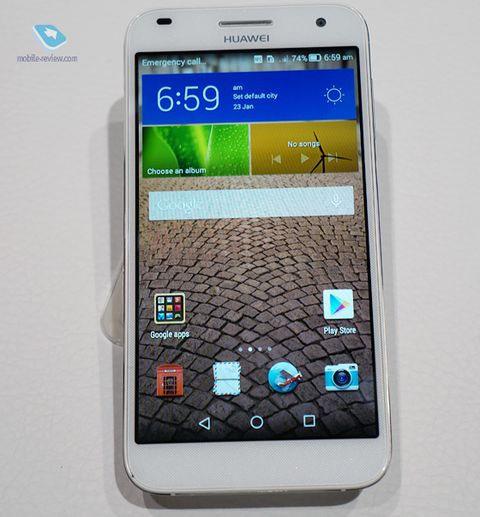 Battery capacity is 3000 mAh. The company noted that when the emergency power-saving mode, the phone can work another 12 hours of calls and SMS. 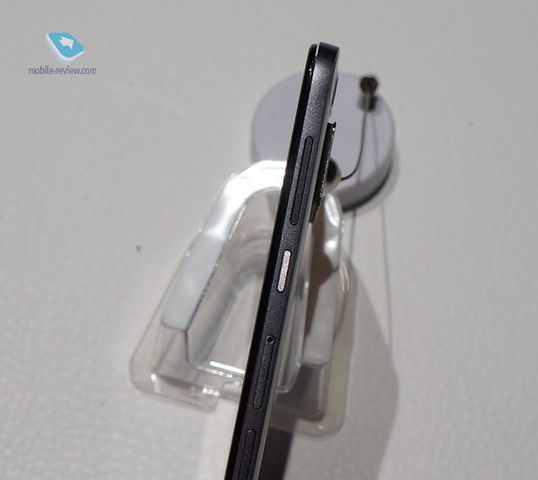 The smartphone has two cameras, the primary 13 MP front and 5 MP. At the presentation told a lot of things good about these cameras.So the main camera is able to shift the focus point after removal of the frame, as well as do vertical panoramas.

The recommended price for Huawei Ascend G7 will be 300 euros, part of European sales will begin in September, and in other countries later. On availability of the equipment in Russia and cost information at the moment. 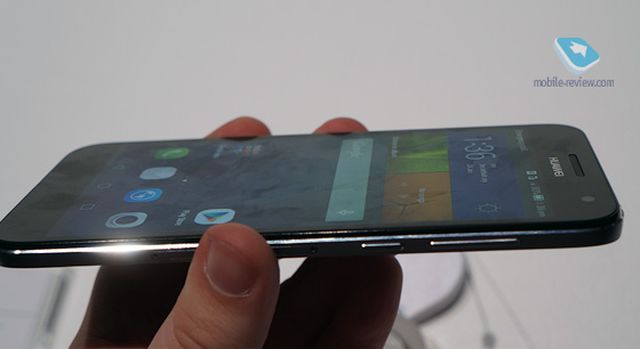 Ascend G7 I liked it well balanced machine, he has a great design, there are a number of interesting features, it will be interesting to test the camera and a new shell.

But that’s the price. Over 15,000 rubles in Russia this device is no use to anyone, there are many stronger competitors. But if the Russian office will be able to persuade the Chinese to put more loyal to the price tag in the region of 12000-13000 rubles, then the model will look much more interesting already. And of course I can not answer that, given the G6 in Huawei made a great job, G7 no longer looks like the budget version of the P7, a self-contained unit.