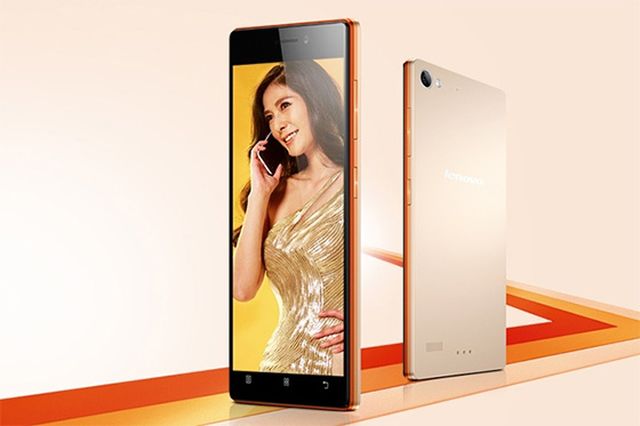 In Lenovo trying to not only create devices that are interesting from the point of view of price / quality ratio, but explore the possibilities in the field of design. For a beginner phone market from Lenovo goes well, and in the second half of 2014 the company launches a bold experiment – a thin, metallic Lenovo Vibe X2, which consists of several layers, like a sandwich. This is an opportunity to express themselves in terms of design and a model that has exactly what is missing in many Chinese – an original design. The problem with most manufacturers from China described corny – they produce very similar to each other device, or copy the famous design of large companies.

Say that Lenovo Vibe  X2 is not like the other models, it is impossible. Someone looking at the pictures, said it was the style of Sony, someone thought that the conventional apparatus, are hundreds. I do not agree with both statements, this model is not similar to existing devices, has its own face, though emotionally it does not touch me at all. It so happens that the thing is not yours, do not hit the mood and your ideas about beauty. At the same time, showing others Vibe  X2, I have heard positive ratings – like the fact that a thin, nicely that there are metal strips on the side of the original.

People are missing the unusual decision, and any deviation from the accepted canons to cheer. This Vibe X2 can not refuse. To what extent is the history of the discharge Galaxy Alpha – design put at the forefront, hence the subtlety of the body, elegant solutions, compact unit. 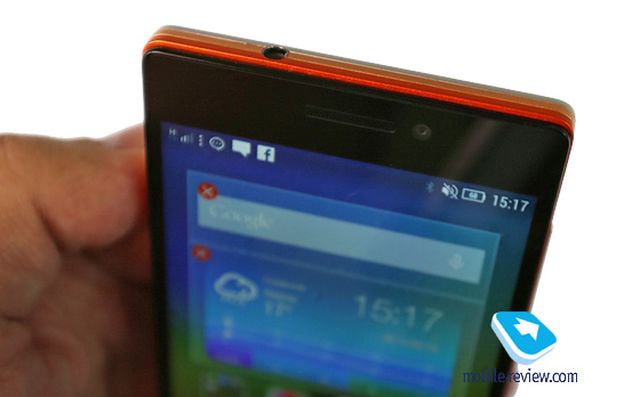 Realizing that contributed to the design capacity of the battery, the company has created an interesting solution, the outer-cover book with a built-in battery – it prischelkivaetsya to the back surface, there are three pins. Accessories of this kind will be several, for any choice. Promise that this will prolong the battery operating time by 75 percent. Who would want to leave the phone as it is, someone will try to increase its capacity. Here the choice between the beauty of appearance and functionality – it is about how the people who put on their iPhone ugly external batteries. Practical? Definitely yes. Beautiful? Definitely not.

I express cautious doubt that Lenovo Vibe X2 will be a very popular device – flirting with geeks and installing a powerful 8-core chipset from MediaTek (MT6595) – this is more negative than a plus. The phone is a very short time – an average of 6-7 hours at a moderate load. Style icon Lenovo is not yet considered, so the main audience of fashionistas and passes. But there is one important point – to eventually win the trust of the fashion audience, for it is necessary to produce such devices. From year to year, gradually increasing their sales. In this aspect, no continuity with Vibe Z just can not be traced, it is different generations and different positioning of the device.

The phone is very thin – 7.27 mm in the hand is perceived as a compact, well-assembled block (size 140.2h68.6h7.27 mm). Weight 120 grams almost weightless on the background of modern devices that are often rolled over for the psychological mark of 150 grams. This is the complete opposite of a large apparatus – this phone is compact, despite the rather large screen.

Initially available in four colors to suit every taste. 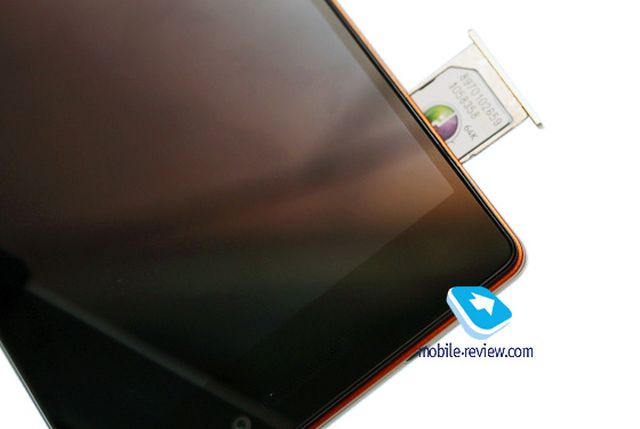 The design of a sandwich of layers of unusual back panel made of metal, but do not expect that you will feel it – very thin and weightless plate full feeling plastic. Trying to push it, do not get scratches on the side of being crushed as metal, hence the derivation of the material.Socks surface, it is not contaminated, it is not scratched. Lateral face with different layers is not obvious, it’s unobtrusive design element.

On the rear surface can be seen 13-megapixel camera, it is simpler than the one that stands in the Vibe Z2. LED flash – immediately.

On the left side there is a slot for SIM-cards, he paired, you can install two SIM-cards – nano / microSIM (in Europe, the device will be one SIM-card).

On the right side is the volume rocker, below – on / off button. 3.5 mm jack on the top, but the microUSB-socket bore on the bottom. Right from the front camera has LED (blue), he winks at you about missed events.

The screen is covered with glass, it does not scratch, practically invisible fingerprints, oleophobic coating is great. Below the screen are three touch-sensitive keys with backlight, it is quite simple and austere. From the point of view of the assembly this unit is good. No complaints just yet.

Screen size – 5 inches, resolution – 1920×1080 pixels, IPS. So the screen does not surprise, but I will note that he has excellent color rendition, the ability to customize the color profiles for themselves. Automatic brightness adjustment works well and does its job. Good viewing angles, the sun screen is still readable. For such a device and the screen is different in class one of the best.

The phone battery 2300 mAh (Li-Pol), it can provide up to 9 days of standby time, up to 6 hours of talk time. Unfortunately, the real-time operation of the apparatus is discouraging – at a very moderate use of the model is discharged to the eyes, it’s 6-7 hours. Affects the use of the voracious chipset from MediaTek – and attempt to limit its performance does not lead to a sharp increase in operating time. You can write it off as a prototype, but I do not think anything will change dramatically (I even slightly underestimated the frequency of the processor, which in practice means a longer battery life). Do not expect a radical change of the time, in favor of this interpretation and the presence of such an accessory as an external case-battery. Apparently, Lenovo realized the flaw of the time and tried to protect themselves. I never failed to ensure that a fully charged at 9 o’clock in the morning the phone live at least until 5 pm. Even when he was almost touching, it is discharged. It happens right before our eyes. Full charging time – about 2 hours.

Lenovo Vibe X2 – Memory, the hardware platform, the performance of

This is one of the first models on the market, built on an 8-core processor from MediaTek – MT6595m. Maximum frequency – 2 GHz, with 4 core Cortex A17, and 4 – Cortex A7. The memory is clocked at 933 MHz, it will surprise nobody. The processor is configured for 28-nm process technology (the same Samsung already produces 20 nm). In the synthetic tests the processor shows excellent results, but the fact is, and synthetics. Plus, we have seen a similar situation to the previous 8-core CPU MediaTek – MT6592. But there is a desire to show the best performance also prevailed, can be roughly said that smartphones now starting to emerge on the second-generation chipset and the major changes that bring the company – is understating the frequency of the inclusion of energy saving by default. I think that 6595 will repeat the same situation, sorry, but this is not an optimal solution in terms of time and work efficiency.

The amount of RAM – 2 GB built-in memory – 32 GB of it is available to you around 25 GB. Unfortunately, the memory card is simply not provided.

In the synthetic tests this chipset has shown himself perfectly. Actual performance in the applications menu and very good, no complaints there. 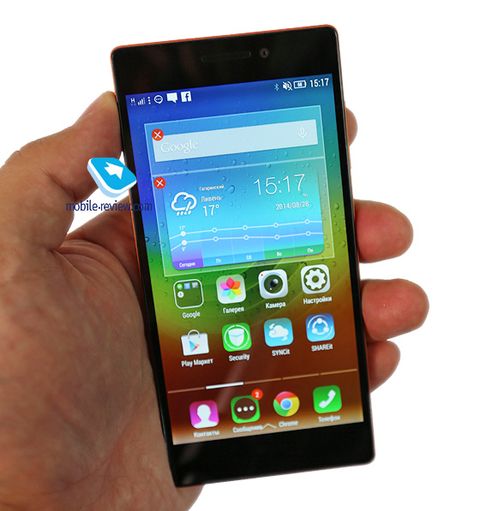 The main camera in Lenovo Vibe X2 – 13-megapixel sensor is used with the BSI. Located near the camera dual LED flash, which can be used as a flashlight.

There are two camera mode: Smart mode and pros. In the first system automatically selects the optimal settings for a particular scene and exposes, in the second you do it yourself.

The camera interface in smart mode is as simple – shoot button, a button to switch between the main and the front camera, and the arrow keys to select or videos.

In the pro-mode, all interesting. You can not only set the level of exposure and the value of ISO, but also to choose the shutter speed and manual focus at a certain distance. In the settings you can turn on in this mode level to the horizon was not “overwhelmed.”

The smartphone works in networks GSM, HSDPA and LTE (4G) and is equipped with two slots for microSIM-cards. The first slot supports LTE FDD (bands 1, 3, 7, 20), so the Russian device works without problems with the 4G-networks.

The second slot is designed primarily for SIM-card on which you plan to call, but the data it can also be used. However, only using 2G (Edge).

USB. To synchronize with your PC and transfer data using the supplied cable microUSB. Interface USB 2.0. Supported USB-OTG – to your phone can be connected via an adapter flash drives and other storage devices with file systems FAT / FAT32.

Wi-Fi (802.11 a / ​​b / g / n). The smartphone is a dual-band Wi-Fi module, it works flawlessly. Like any other modern Android-device, Lenovo Vibe Z2 Pro supports “rassharivaniya” mobile Internet on Wi-Fi (Wi-Fi-router).

The unit comes on Android 4.4.4, currently the latest version of the OS. All of the features used by the add-on Android called Vibe UI are described in a separate article. I will not repeat.

In terms of quality of work and voice no complaints with this unit, everything works fine. If Vibe Z2 small amount of internal memory of 32 GB looked like a flaw in this machine, I do not consider it as such, different positioning and objectives.

Exit this device must in October at an approximate cost of 15 000 rubles ($ 390 for other countries, the figure is from the press release).Of the drawbacks of note only time, it discouragingly small. Buy external battery-book – it means to spend the extra money, and the model will become more expensive, and therefore, the number of competitors will grow sharply. In my opinion, the style of this unit in common with Sony, at last in this price group rather interesting suggestions, you can pay attention to them. But among Chinese companies can look at Meizu MX4 – it is built on the same chipset, has a similar screen, but the battery is more than that, in theory, should be better.

Should we focus on this unit as a serious contender in the segment? Hard to say – it all depends on your tastes. Did you fall in love with the design of this model and then nothing will stop you, and you ignore the shortcomings. But if you come to a choice not emotionally, enable a rational approach, then, of course, you will find both advantages and disadvantages. It is possible that the first will not be able to balance or outweigh the latter. What do you think about the design of this machine?