Game pad GPD Q9 is based on the processor from Rockchip 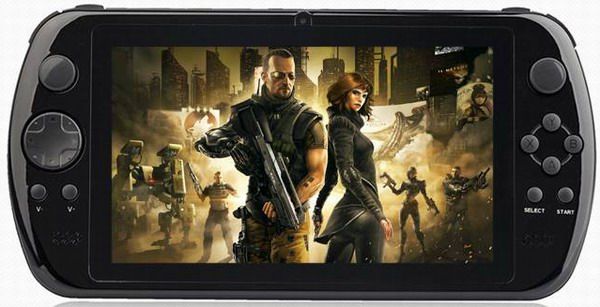 In China, there was a presentation of the new tablet GPD Q9 from the company GamePad Digital.It was created specifically for mobile gamers, which manifests itself in an abundance of hardware buttons and joysticks located on the sides of the screen and suitable for use in video games.
Unlike the vast majority of gaming gadgets, tablet GPD Q9 is not based on the processor NVIDIA Tegra, which was originally geared for video games. Assembled on this PC CPU Rockchip RK3288 with four cores and graphics Mali T764. Its features are also quite enough for the most demanding video games, and they will also be given access memory of 2 GB. By storing files in GPD Q9 allotted 16-gigabyte drive, plus you can always install a microSD card to expand capacity.

PC gamers will offer a 7-inch screen with IPS panel with a resolution of 1024×600 pixels, VGA-camera, HDMI-output for connecting to a TV, inputs for headphones, OS Google Android 4.4 KitKat, modules Wi-Fi and Bluetooth, and GPS-receiver. This means that it is not just a gaming tablet, but also a handy navigator, and probably on the map can be moved using the joystick. And another nice thing: tablet GPD Q9 is already available in all well-known Chinese online store for just $ 120.