The Grand Budapest Hotel: a sweet dream about Europe 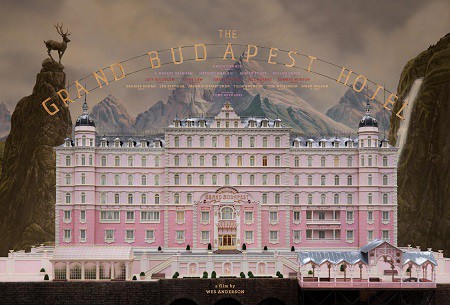 Sad storyteller and infantile maker Wes Anderson pitched another arts and theater world. Hilarious, with a hint of nostalgia for a bygone era, a tragicomedy The Grand Budapest Hotel icing on the cake was the last Berlinale, pleased the jury talk about aging Europe and having received the Grand Prix of the festival. From March 13 Russian viewers can also taste the generous gifts of Anderson.

The plot is somewhat similar motive picaresque novel, unfolding in a particular location of a luxury hotel in a fictional country Zubrovka on the borderline between the two world wars. As a basis for his detailed and thoughtful difficult to construct the world Wes Anderson took an abandoned department store in the Art Deco style, located in Goerlitz on the border of Germany, Poland and the Czech Republic, took the sign Karstadt, added doll pink and imperial-gold color, and voila The Grand Budapest Hotel ready. 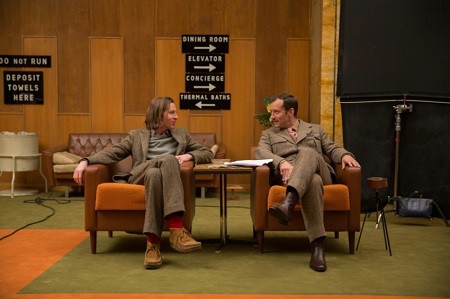 Recognizable at a glance style Anderson, director for decorative effect which is often criticized here honed to fanaticism. In any other film it is impossible uglyadet such painstaking and scrupulous work on color, composition, architecture, design, hairstyles, makeup, costumes, characters and atmosphere, as in “Hotel.” Even “Moonrise Kingdom”, with which, it seems, began quaker procession Anderson, respectfully standing on the sidelines. In the new film, we not only feel the constant presence of the author, but also literally physically feel that the invisible hand turns our gaze to one side or another. 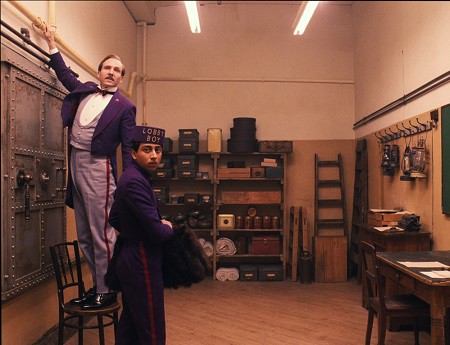 The degree of elaboration of the tape says at least have that for the film was built a ski resort with a hotel property, funicular and a suspension railway. Prada prepared for tier stars who were removed in the picture vintage clothing, suitcases, handbags and accessories 30s. Even scandalous painting “Boy with apple”, which is set around the main intrigue, was written on the order. But despite the fact that the homes of Anderson looked through the cozy, with tiled roofs, Czech houses and confectionery Mendel’s so similar to the famous factory in Prague, serving delicious cakes and almond waffles, what we see on the screen – not Europe , but rather a sweet dream about it. 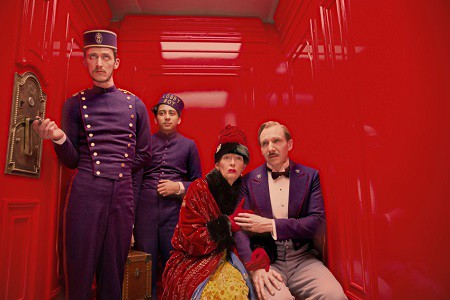 American to the marrow, Wes Anderson, imbued with the works of Stefan Zweig , sighing for the passing gallant and free era, the film carries the still influential and shikuyuschy, but already fading Old World. The eyes of his characters, he shows approaching horrors of destruction, poverty and fascism. However, do not take the film as a historical replica. History for Wes – decoration too.

On the front, the plan goes intelligent, gladkovybrity perfectly ironed and executive concierge legendary hotel The Grand Budapest Hotel Monsieur Gustave ( Ralph Fiennes ). People are so helpful that his caring hands of customers, especially the fairer sex, find satisfaction and harmony. One such“old friend”, obscenely rich and voluptuous precocious Madame D. ( Tilda Swinton ), prematurely and forcibly (who would doubt) dies. The plot twists famously – did not fail to annoy the old lady from the grave greedy rodstvennichkam headed son Dmitri ( Adrien Brody ) and Unsubscribe Home heirloom – “Boy with apple” – lucky-concierge brighten her old age. That, of course, took accruing despite the protests and threats of physical violence. And, therefore, got into trouble, worthy of the best stories by Leonid Gaidai . 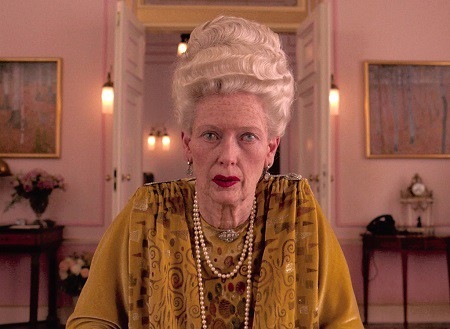 Infinitely fine cast paintings, whose game does not fit within the known philologists laudatory epithets.Duet immaculate Ralph Fiennes (which may, if possible, and nifty screw, and even selective mat cover) and Homeric funny dried duck Tilda Swinton deserves special praise. Just look at this Bowiein a skirt, unrecognizable in makeup, pursed his lips! Her screen time not to exceed five minutes in total, but rest assured you will never forget it. 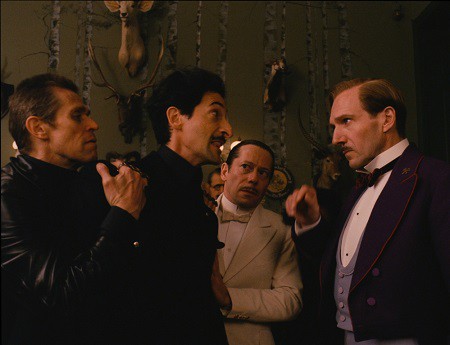 Anyway, the first-magnitude star, celebrity high rank flashed so often and so quickly that dizzy.Gallery baleen characters represented, besides those already mentioned legends of world cinema, and even Edward Norton , Jude Law , Owen Wilson , Mathieu Amalric , Jeff Goldblum , Bill Murrayand Willem Dafoe . However, the latter is just no mustache. Probably because he – the main bad guy and harsh man who facial hair to anything. In the film, no stranger actor familiar with, like, and do nothing special: really only managed to turn Ralph Fiennes and Tony Revolori . Last played Zero,expat-corridor, faithful servant and friend of our hapless hero. 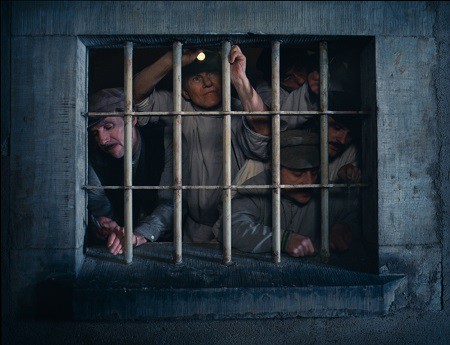 Incidentally, they do not let us down, which is by joining the usual Anderson castes. And best of all in the ensemble were Harvey Keitel (Ludwig) and the company, embodied on the screen prisoners.They deftly obstryapali jailbreak that it was quite in the spirit of ” gentlemen of fortune . ” Actors, by the way, to achieve credibility have stayed a few days in a real prison. However, apart from them, concluded there was no more.

In general, the picture is not only almost maniacal director Tuned – each passage chamber, head rotation, close-up, every phrase here thought to the millimeter – but also original, and, most importantly, relevant findings. For example, never before in the films of Wes was not inherentTarantino black humor. A chase scene mercenary Jopling … It’s elegant curtsey towards last Olympics. Then you and the race-chase, and jumping and bobsled, and slalom. And needless to say that for Europe, which this year celebrates the centenary of the First World War, the film came in handy? Although, again, not war here we are. 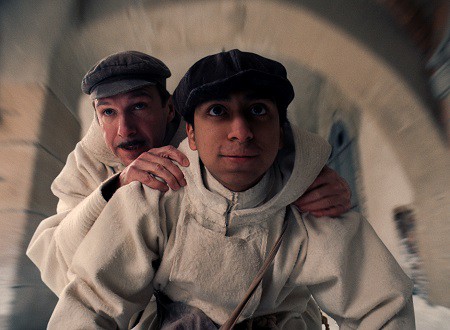 All this spirited action moves dramaturgical law director as a children’s matinee, as if descended from the stage amateur productions. Author with M. Gustav, whose mouths speak heroes Zweig, sad about how relentlessly cool and everything changed, as have limited freedom of movement has ceased to be appreciated aristocracy and intelligentsia, as in the usual way prosperous broke brute force. Monsieur Gustave himself became a relic of the old era, he now in a museum. Realizing this, he uses, yet may, for the simple rites – caring for the elderly insecure blondes deems morals, observes orders, keeps other people’s secrets and protects those who are faithful to him. As a result, for the trouble he gets his reward. Perhaps Anderson afraid of becoming a relic of the same time with his sentimental humanism. So does the same thing, but in his manner. At different times and in different circumstances these simple traditions help keep external aggression. 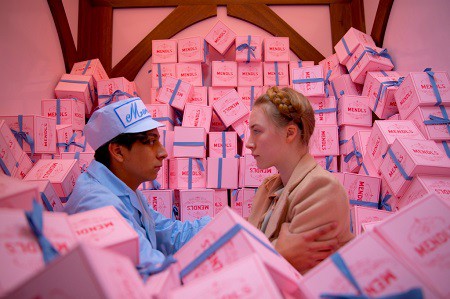 For the same reason he fills his film Diabetes to the brim. It is not only manifested in the confectionery delights Mendel, but also in colors, cozy robes, small boxes marshmallow, pink wallpaper, soft as a marshmallow, carpets and glossy, like candy, elevators. Many sweets is not even in the world of Willy Wonka. And all this could be disgustingly cloying and cause diathesis impressionable viewer, if it were not so sincere and childish directly. Well, Anderson as nobody else is able to recognize false.

And those who once in my life cooked jam, knows more sugar to add, the longer it is stored. Here and in the “Grand Budapest” – forever remain sincere feelings, naive tales of former way of life, devotion to friends own greatness and a bit of light grief.