Honor V9 with Dual Camera will be presented on February 21

Less than a week before the start of MWC 2017 will be a presentation of the company Huawei, where she will present the apparatus Honor V9. It is scheduled for February 21, place – Beijing. It is stated on the poster with the Olympic champion Sun Yang. Also it is possible to see an obvious allusion to the dual camera.

Previously, the phone is already caught the eye of passing certification agency TENAA for sale in China. Then we learned that the Honor V9 equip the 5.5-inch sensor with resolution Quad HD (2560 x 1440), the chipset on eight cores, the maximum frequency is 2.4 GHz (probably HiSilicon Kirin 960), 64GB ROM. Expected two versions of the device with different amount of “RAM”: 4 and 6 GB. 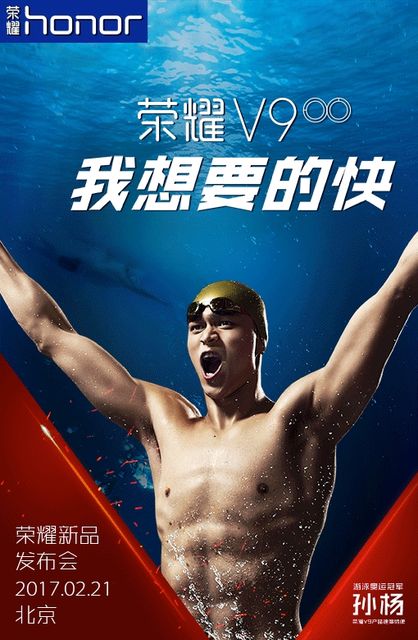 Both modules are the main camera will have a resolution of 12 megapixels, while the front camera will shoot 8 megapixel. Good battery, its capacity will be 4000 mAh, according to also support fast charging is not yet clear what standard. Operating system – Android 7.0 Marshmallow, covered with shell EMUI 5.0. Price – 3000 yuan ($436).