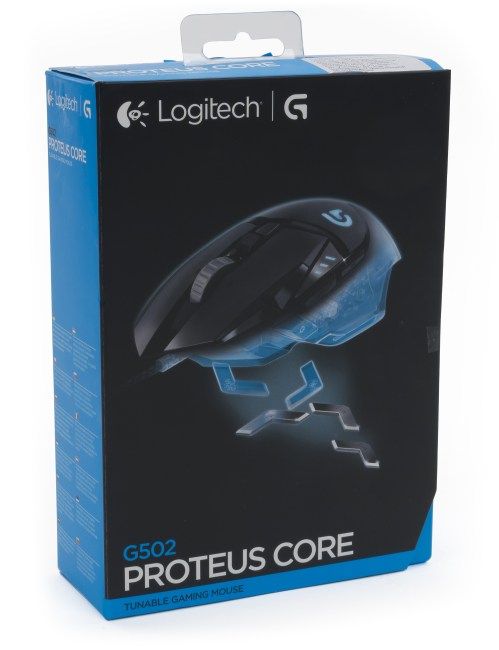 0
SHARES
151
VIEWS
Share on FacebookShare on Twitter
Recently, the famous Swiss manufacturer periphery trying to please the greatest number of gamers.Eighteen months ago, we told you about multibutton giant G600 for fans of online role playing games.Around the same time, the Swiss have also released several optical and wireless game models, and recently introduced products targeted at fans of shooters, – Logitech G502.

In the box with the mouse also has information bukletik and a set of five weights, boomerangs weighing 3.6 g
Logitech does not usually indulge users extensive bundle. Producer understands that geymerskogo manipulator it is not the most important aspect. 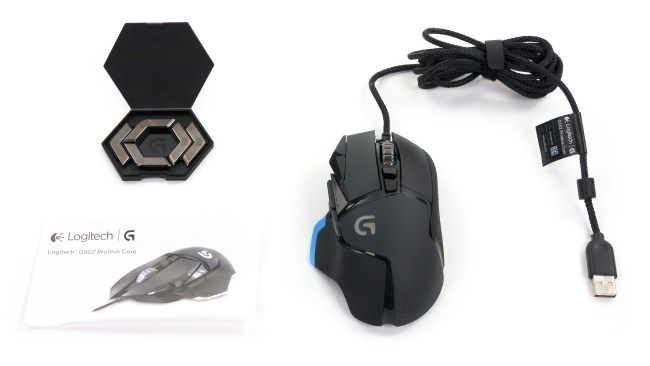 Logitech G502, perhaps, can be characterized as one of the most aggressive-looking mice in stock producer. Previous models, particularly referred to G600, formed smooth lines. In the Logitech G502 ball rules “chopped” design.
The main surface of the mouse is made of plastic soft-touch, slightly rough to the touch. The side panels are made of rubberized material, almost identical in appearance, but differs in the haptics.
Panels are separated by glossy black recesses. Together with small blue housing elements they create design accents that make a variety of appearance of the mouse. 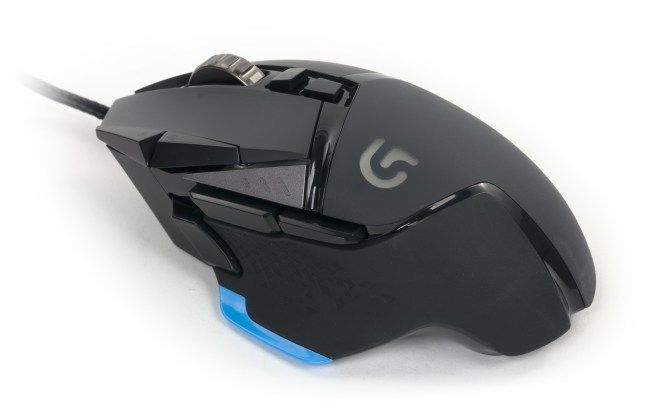 The left and right buttons G502 occupy about half of the body. Between them is a wide fluted wheel and two small buttons. Typically, such a combination is used to switch levels DPI, but here things are different.
Device wheel is the main structural feature of the Logitech G502. By default, it works like most other mice – scroll short and precise steps (uttering at the same quiet sound). But if you press the button just under the scroll wheel, it will go into free mode and will run smoothly. And when you lower it, make a lot of inertia still turns. Despite this freedom, operated in this mode with the scroller easily and free scrolling much easier to work with large “sheets” of the text.
Wheel also is equipped with the horizontal scroll bar, but we have some reason it does not work. It’s a shame, we hope that this is only a problem of the test sample. 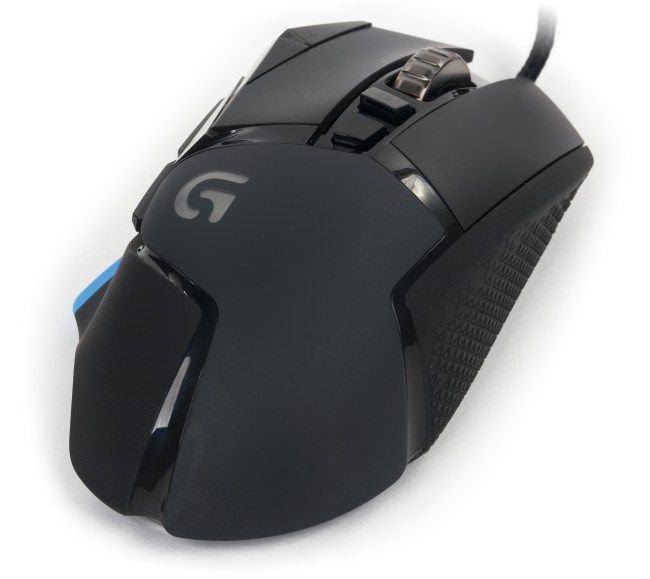 To change the DPI are two elongated buttons on the left side. This arrangement seems logical. The selected level is on the gray triangular insert. It consists of three LEDs, which in various combinations represent five levels of sensitivity (four regular and one “sniper”).
Also on the side of a pair of buttons for the thumb (forward / backward), comfortable and large enough. Like any self-respecting mouse for shooters, not without buttons sniper mode. Here she has a comfortable concave shape. And provided support for the thumb.
Logitech G502 is based on the Teflon insert a large area, allowing you to keep a comfortable grip when playing without a rug. 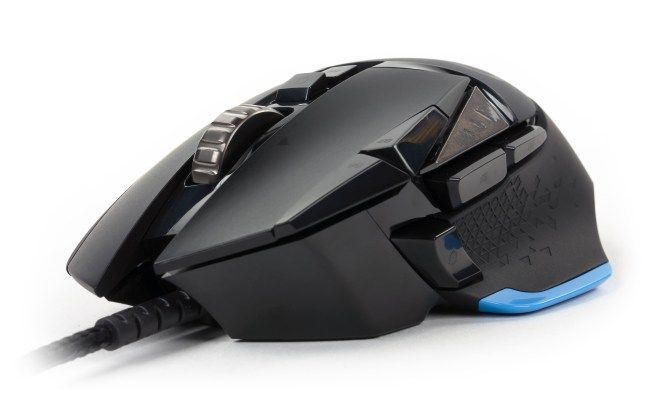 Compartment is located behind the lower weights cap. It can be easily removed as attached with a magnet. When all the weights, you can increase the weight of the mouse on the ’18
G502, certainly stands out from the current range of mice producer. When something looks too bold Logitech G9x, but next to our hero, it seems to have a fairly conservative model.

For all of their gaming manipulators Logitech uses the same highly functional utility. We talked about it in the review of G600 .
The user is given the choice to save the settings on your PC or to the mouse. The advantage of local storage that the program will be able to determine what the game is running, and include the appropriate profile management. But stores in the mouse will allow to use it on other computers with different settings.
G502 sensitivity adjustable in a wide range from 200 to 12000 dpi in increments of 50 dpi. In the settings you can turn a corner anchor, facilitating the movement of the pointer on the line. This will be useful in the graphic editors. In addition, the logo also controllable backlight, but its color can not be changed. By the way, some time after turning off the computer the letter «G» still remains lit.

The main feature of the utility G502 is the ability to adjust it to the type of surface. Pinch the left mouse button, move the mouse on the surface being studied by following the instructions on the display, and the new profile will remain in the coating application. Honestly, the practical benefits of this feature, we have not found. But she definitely corrects the behavior of the cursor, because when we put on a textile covering a preset for a hard mat with a low coefficient of friction, move the cursor has become very difficult.

In practice, the Logitech G502 has proved excellent. Due to the elongated body mouse buttons turned out relatively large, but this fact does not harm confident enough. All the keys were in the right places, only to the elongated buttons switch sensitivity had some time to get used to. Upset only that the scroll wheel did not work in the horizontal direction.
By default, the little button in the middle of the mouse no functions have been assigned, but it is perfect for any team that does not require a hurry (for example, open inventory).
Adhesion to the surface of the mouse steady enough to comfortably play on a tabletop made of particleboard with no mat. Shield also looks robust, power it does not wring, which has long service life. Excess cord can be secured using cable ties. 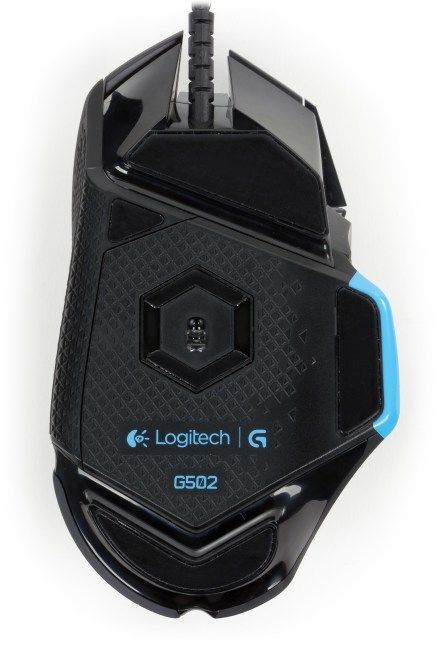 Mouse Logitech G502 interesting features and, of course, quite a bold design for the manufacturer.When designing new items experienced Swiss do not lose your head and no casualties for the sake of a catchy mind not brought. Before us is a major manipulator of the classical form, almost effortless to cope. Its functionality is complemented by comfortable proprietary software.
Average price Logitech G502 as of this writing is about 2,800 rubles – certainly not cheap, but it is quite competitive.
Pro:
Contra:
Tags: G502LogitechMouse
ShareTweetPin 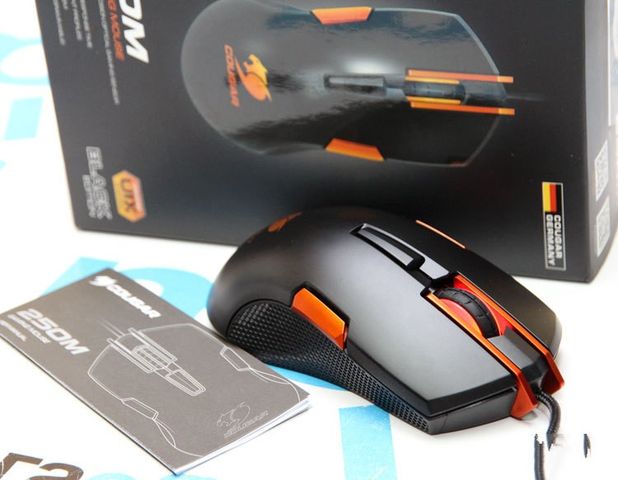 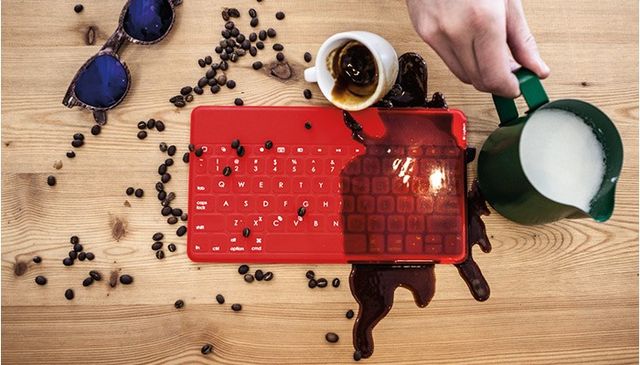 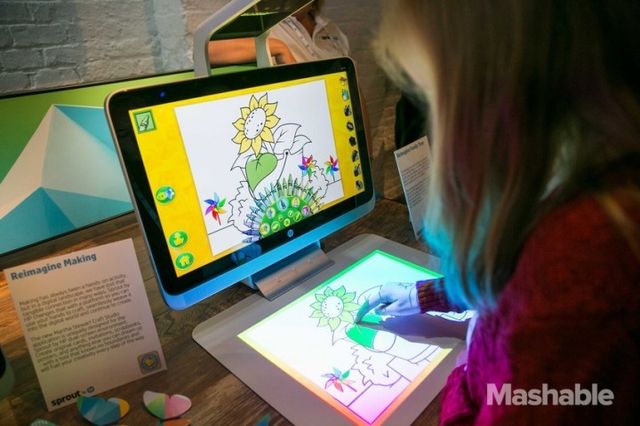