How to keep luggage to travel 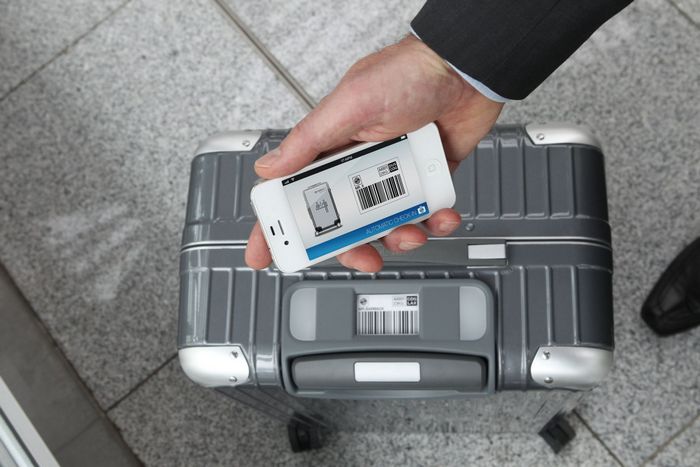 Those who like to travel and tourist trips, probably once in my life encountered such a problem, as the loss of luggage. And this problem is very urgent and widespread, because according to statistics a few thousand pieces of luggage are lost in the world every hour. The reasons for this can be very different – from the distraction of employees-carrier to malicious acts. It is clear that travel always with hand luggage, holding, so all things is at hand – is not an option.

Loss of luggage – the situation is not pleasant, especially if you are traveling on holiday from the snowy Russia to warm countries. After all, no one wants to be on the beach in a jacket or winter coat. The worst thing that search and search for the missing luggage sometimes take weeks or even months. How to protect yourself from this problem causes so much anxiety during air travel? It turns out that today there are real ways to get rid of the problem of lost luggage.

Let’s start with the fact that the airlines themselves are well aware of the scale of the problems and difficulties that arise from the passengers in this regard. Thus, the largest airline AirFrance introduces special electronic GPS-tag for tracking baggage from your mobile device. This system was developed in cooperation with KLM. It includes two devices – eTag and eTrack. They greatly simplifies the process of check-in luggage at the airport and, in addition, have the passengers an opportunity to check the status and location of their belongings during the entire air travel with your smartphone.

ETag tag has two e-ink screens. It can be easily attached to suitcase handle or other baggage, as a simple label. The device allows you to reduce the time of baggage at the airport with a few minutes to just more than thirty seconds. Displayed on the screen eTag flight details and passenger, plus a bar code for reading in a self-registration kiosk, where every passenger passes your luggage.

In turn, eTrack is a more complex device that is already placed directly inside a suitcase or bag. The device is endowed with a GPS chip and a special module, whereby the owner of the luggage gets information about his whereabouts. With eTrack, in particular, you can see whether the luggage is laid on the conveyor, or has already been sent to the hotel. Devices eTag and eTrack can be used separately. 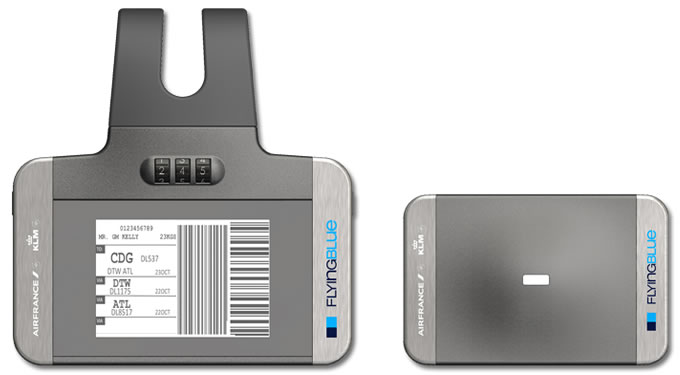 In AirFrance hope that both devices will be used by other airlines. In the meantime, test trials of electronic tags is scheduled to begin later this year. Such a technology, by the way, has already been tested by such giants of the postal industry, such as DHL and FedEx.

His solution to the problem proposed by Airbus. It offers travelers to facilitate the passage of the procedures associated with the baggage, and to ensure safe delivery of items to use “smart” suitcase Bag2Go. The idea developed in conjunction with the service provider in the field of information technology T-Systems. The bottom line is pretty simple.

In the suitcase built a special sim-card, which transmits on a smartphone or other mobile device in real-time information on the location of baggage and weight. Once the device is synchronized with the smartphone, passenger’s luggage is under full control. Among other things, sim-card is much easier procedure itself check-in and baggage at the airport. The apparatus includes such “gadgets” as chip GPS, cell module and a radio frequency identification (tag RFID). Information with Bag2Go come to your smartphone using the same name of the application. It is important that the application not only shows the location of luggage, but also notifies when the bag is opened airport employees.

The very “smart” suitcase until went on sale. This system will operate in test mode for this year. These bags, perhaps in the very near future will be rented to passengers at airports. In any case, many airlines are interested in this kind of solutions as search and return of each of the missing luggage carriers brings additional costs. With the new system it will be possible to significantly reduce the volume of lost baggage.

However, currently available on the market and there are partial solutions from companies not involved in the airline industry or the construction of aircraft. For example, travelers can purchase a “smart” label Calypso Tag, which is integrated transmitter Bluetooth. At the airport, always inconvenient to wait for the bag to arrive on the luggage belt. However, these devices are becoming more convenient and easy. Calypso Tag through the transmitter will notify passengers about when a suitcase arrive on the luggage belt and can be taken away. The messages come directly to your mobile phone. Thanks CalypsoTag no longer have to fight for a place in the crowd at the conveyor belt at the airport. 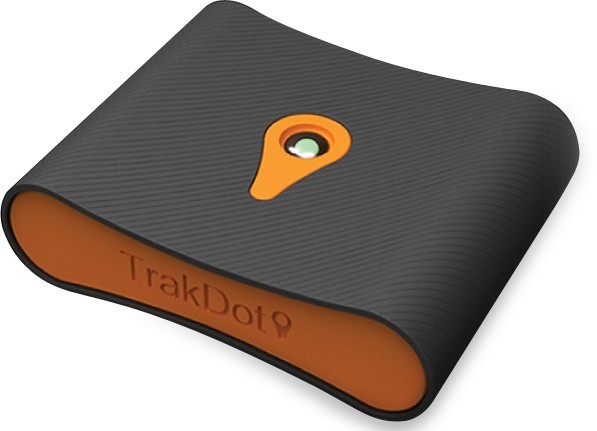 The range of devices reaches sixty meters. However, the tag is able to remember its last location, even if the luggage is outside of this radius. CalypsoTag equipped with a miniature battery, the life of which is six months. The device is made of high quality Italian leather and is available in four trims. Tag works with a free app Chipolo of Nollie, which not only helps to determine the location of the luggage on the map, but also provides the activation of the warning signal in the event that the suitcase was suddenly out of reach. For example, if it is decided to steal from the baggage belt. So CalypsoTag also ensures the safety of the carriage of baggage.

Another interesting device to keep track of luggage on the trip – it’s a gadget Trakdot Luggage, developed by GlobaTrac. He was formally introduced yet at the Consumer Electronics Show CES in the past year. The principle used is the same: the device associated with your smartphone on iOS or Android, and informs the owner locate his luggage. It’s enough to put an electronic tag in a suitcase or bag that you rent at the airport. The device is equipped with a miniature GPS-sensor and two penlight batteries, which is enough capacity for a period of about two weeks. After buying the gadget you should first register and linked to a specific phone number (or more). All further manipulation devices via a service organization.

Trakdot Luggage has a very modest size and resembles a regular cigarette pack, which can be thrown into any bag. With applications for iOS and Android, you can see the locations of luggage on the map. Also you can go into a worldwide network and learn the same information via the website Trakdot.com. Interestingly, the device has been designed with the safety regulations, so it is automatically turned off at the time of take-off, landing and flight of the aircraft.

Another important feature is the ability to Trakdot Luggage function effectively indoors. Radius – thirty meters from the owner of the baggage. Information on the whereabouts suitcases can be done in several ways by choice: email, sms-messages and mobile app on your smartphone. 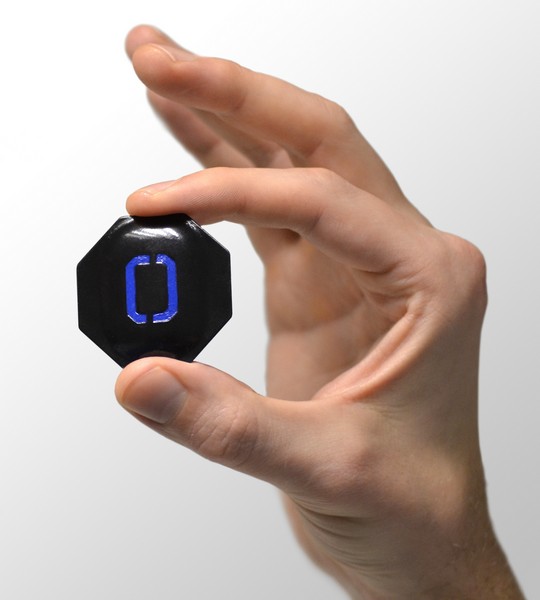 Finally, it is worth mentioning the gadget, which is designed not so much to keep track of the location of luggage, how to monitor its safety during transport. It is an interesting idea Cambridge researchers. They called their tiny gadget DropTag. In principle, the device was developed for postal parcels, but can be used to ensure the safety of baggage during travel and air travel. The gadget is equipped with a set of sensors that record various readings and store them in internal memory. Through the application to your phone, you can know the exact time and location of your luggage when he was pushed or dropped. Due to this the company’s employees, the carrier will not be able to shift the blame to someone else, blame will be determined immediately by using objective data.

The device itself Drop Tag as small matchbox. It is placed inside the parcel or baggage and constantly monitors are being treated with the property. Any fall, strong shocks and blows will be instantly tracked fitted with motion sensors. The sensors communicate with the owner of the luggage on the phone via Bluetooth. In case your luggage becomes corrupt, the data DropTag allow claims against the carrier.

Novelty can be a good incentive for shipping companies and air carriers to more carefully handle the mail and baggage of their clients. Otherwise, they will wait for the many lawsuits. The cost of this is very useful and unusual gadget is around ten dollars. So far, however, this is only a conceptual model that is available to order. But with the proper investment unit can be run in series.