Mark Frost spoke about the return of Twin Peaks 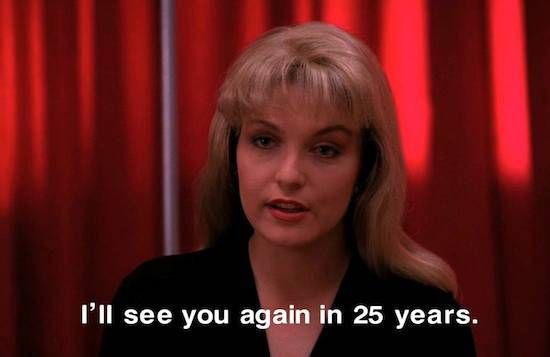 At the end of Twin Peaks Laura Palmer pochivshaya looked into the eyes of Agent Dale Cooper and said: “See you in 25 years.” Well, it’s time to keep the promise.

Showtime has announced that ordered nine episodes of the cult TV series continuation of David Lynch and Mark Frost, the output of which will take place in 2016, just on the 25th anniversary of the series finale.

TVLine tried to find out from Frost at least some parts of this good news.

Rumors about the revival of Twin Peaks went for about two years. So how do you work on this?

David and I kept in touch all these years. About three years ago, in the summer we had dinner together and discussed various ideas. And suddenly we realized that we would like to once again find himself in Twin Peaks. Since this all began.

Showtime was the first channel, where you turn to?

More we to no one accessed, Showtime was the only channel that we discussed it. Gary Levine, the right hand of President David Nevins Showtime, was our representative, when the show was on ABC. We have long been familiar with Gary. Gary We Trust. We love Gary. We held a great meeting. And David Lynch loved the paintings on the walls of the office, David Nevins. And they like the show itself. And so it happened.

Be clear: this is not a remake, but a continuation? How to Dallas on TNT?

It’s not a remake. The story continues. We will see the impact of events, as shown earlier.

In the series finale, Laura Palmer said Agent Cooper in the Red Room: “See you in 25 years.” This may not be a coincidence, is not it?

You’ll understand when the show will be released.

You treat it as the third season of Twin Peaks ?

Not quite, but the problem is, rather, in me. I have always said that Twin Peaks to me like a book, each page of which we took. So now that we have found a new volume of the saga, which also ekraniziruem.

In these nine episodes we can expect a new mystery?

If I told you I’d have to order drones to destroy your home. And I would not like it, haha.

Is the story Fire Walk With Me part of the “canon”?

I think so. He’s definitely part of the mythology of the series and will have an impact on future events.

Have you set a goal to recover as much as possible the old actors?

We expect both new and old faces. It is too early to speak about certain personalities. We are not yet at that stage.

Over the past 25 years we have left several actors of the series, including Killer Bob. How do you plan to deal with this?

I’m afraid I can not say about it, will get loose too much.

In his book, Reflections: An Oral History of Twin Peaks journalist Brad Dukes talked about the problems, because of which the second season a little disappointed. ABC strongly pressuring you to quickly solve a murder, and you and David were engaged in other projects. Since now in the nine episodes will respond to you all, can we expect to return to the level of the first season?

This is definitely one of our main goals … For our first dinner, we decided that if we do this, then fully themselves. It all started with us and continue to be with us too. Then we have determined that they themselves write the script, and David will remove all the episodes. And they, too, we sprodyusiruem together.

The new season will focus on the hardcore fans or do you want to find a new generation of fans?

It is fair to say that there are few series with a loyal fan base, as in Twin Peaks . We are extremely grateful to all those people who gave not the glory of our show to fade away. So we’ll make a gift to this type of fans. At the same time, we hope to entice and new viewers.

Angelo Badalamenti to write the soundtrack?

It is too early to talk about it.

The situation on the television is very different from what it was 25 years ago. In those days there was nothing like the Twin Peaks . Since there are dozens if not hundreds of imitators. Are not you afraid that the concept is slightly out of date?

For us, the concept is not outdated. I think we can easily carry over this concept in contemporary realities.

Can we expect to continue in the case of success?

What it means to return to Twin Peaks for you personally?

For me, and for everyone else who worked on the show, it was one of the most important events of life. And, of course, a chance to return to this fall only once in a lifetime.

The second season was released controversial and many fans are unhappy with the ending. You treat it as an opportunity to give the viewer a decent ending?

We hope that these episodes will give fans everything they have not had the last time.

Haha. I recently showed the second part of the “Austin Powers” in his son, who asked me about Heather Graham. I said, “Oh, this is Annie.” He asked: “Who is Annie?” I corrected him, “No. The question is “How’s Annie?” And, judging by the film, Annie is in order.