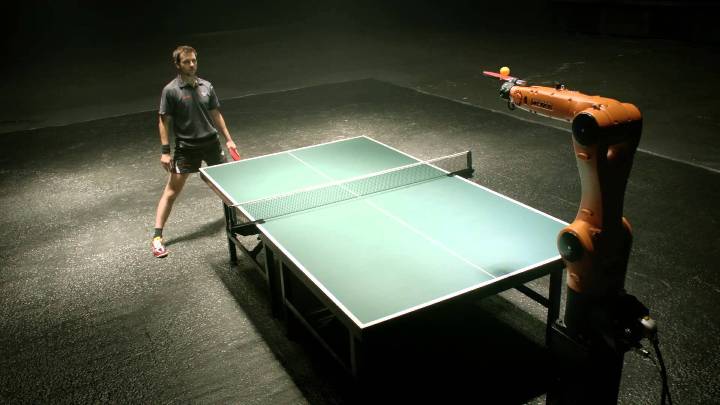 One robot, which the brothers Capek gave this name was biological. But in the mass consciousness of humanity robot strongly associated with the archetype of the “iron man.” No matter what handmade maid Hephaestus were gold – still the same metal … And now the robots are increasingly becoming “soft”. And there was even a specialized journal Soft Robotics. And already from its first issue of materials is very clear why the robot need softness and why it is preferable hardness.

Robots are now able to make quick and well coordinated movements. Here, for example, tennis. Table, ping-pong, is traditionally considered an excellent vehicle for the development of eye and motor skills (well, useful, when pioneers or soldiers are gained round the table, rather than Brownian roam the grounds, undaunted by any penalties). So now the great robot playing table tennis. And not in some specialty, and the most that neither is serial. Manipulator KR Agilus from the famous robotic company KUKA .

Held in March 2014 match between the robot and the former world number one player Timo Boll won man – with a score of 11:9. But first, to 0:6, led KR Agilus aka KR 6 R900 SIXX. And then people, remembering that he was a billion years of evolution, and many years of training to get ahead. Roller with Timo Boll match with the robot can be viewed at this link. And we pay attention to the fact that the serial manipulator designed for high speeds, carrying six kilograms of payload and having 52 kilograms of its own weight, is able to compete in agility with people. 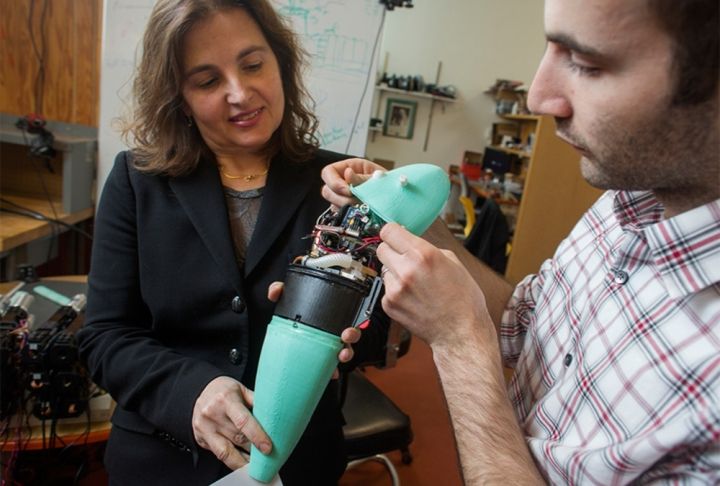 And from the people to wait for further growth speed and coordination is hardly worth all was predetermined by the “Design” solutions that Monte Carlo evolution took millions or even hundreds of millions of years ago. A robot only limit the fundamental laws of nature, intelligent designer, whether man or Watson, is able to use a much more reasonable scheme; won – all the volumes of the “mechanism” Artobolevsky services.

But there is one problem … Look how fast has the movable part of the manipulator, weighing several tens of kilograms, and imagine what will happen to the man who would inadvertently slew within the machine feet. At the plant trying to avoid this – by installing fences and numerous locking devices. But robots are the same – in the service incarnation – are increasingly out of the shops. Of course, their control systems are becoming more complex and sophisticated – and will try to avoid a collision, but inertia has not been canceled …

So in many cases preferable to have a soft robot. Part of (inevitable) collisions do not lead to any undesirable consequences for either people or furniture. And besides – this tells the director of the Laboratory of Computer Science and Artificial Intelligence at MIT (MIT’s Computer Science and Artificial Intelligence Laboratory) Daniela Rus (Daniela Rus) – soft robots have a unique opportunity to improve the efficiency of movement. The fact that they not only are not required to avoid collisions, but can even use them to enhance their dynamics.

Go back a few decades in the past. This is the book of the great popularizer of science Martin Gardner, “Mathematical spare time” published “World” in 1972. The chapter “The problem is solved … the cue ball.” It Gardner writes that once invented by Lewis Carroll problem of the motion of a billiard ball in a cube can be of practical significance, while contact with the forthcoming development of space structures. Well, ISS revolves around the planet, but many IT develop rapidly and the goal to optimize their traffic worth is not primarily for the astronauts and robots …

And for the realization of such an approach and was coined soft robot fish. Built it under the Rus doctoral professor Andrew Marchesi (Andrew Marchese). When you create a very comfortable used for experimental craft bulk printing technology, which was formed by a “skeleton” of fish, skinny then silicone rubber. In the robot-fish lead pneumatic muscles, and in its tail taken two long sinuous channels, one on each side.

Serve more pressure in one – tail bent to one side, served in the other – is bent in the opposite direction. Speed ​​operation of the system (running on carbon dioxide) depends on the section of nozzles through which pressure is applied, is very familiar to anyone who has had to deal with pneumatic servo. Flexibility of the robot, this scheme provides a very significant: ihtiobot can be bent at an angle to one hundred degrees …

Here’s what ihtiobot in the towing tank.

And this ability is very quick and very sharp curves gives the robot fish flexibility and agility, allowing argue with living beings. True – in a very short period of time. Pneumatics – not the best source of energy. It worked the very first engines only minutes Whitehead. In later torpedoes steel heat compressed air kerosene heater. Then went to move oxygen. (Those interested in the history of technology can read this excellent article – ” But intelligence reported accurately, “the 61-cm torpedo arr. 93” “)

Well, the American robot fish carbon dioxide is only enough for a few dozen sharp movements. So it is only an experiment, and not fit to practice machine. And the next model – already uses hydraulics – will also take place in the department of “technology demonstrator.” But technology is very, very interesting, mainly due to its “softness.”

“Softness” will be very useful in many practical applications. Believe me, after a while you will choose the children or grandchildren of robotic nurses or companions toys. And – with a very high probability – “softness” in this case would be the most important competitive advantage. After all, the child moves very sharply and malopredskazuemym trajectories – and so let it will be in the company of soft ware that will protect my child from unnecessary bumps and furniture – from absolutely devastating damage.

But there are more important, almost philosophical aspect. (Philosopher, of course, only in the sense in which overseas books are written about the “philosophy of basketball …”) Motion soft robots can be programmed quite differently. Also similar to billiard balls, give another analogy of spacecraft using gravity free planets … So soft robot is not necessary unlike his fellow hard to choose from the available beam trajectories only those that are not fraught encounter.

He, on the contrary, as a billiard ball skillful, can deliberately use the collision (the truth – the degree of elasticity will depend on many factors) to move inaccessible rigid robot trajectories. It is considered the main advantage of soft robots Barry Trimmer (Barry Trimmer), biology professor at Tufts University. According to him, soft robots are more effective where necessary to act malopredskazuemoy environment (be it underwater caves or children’s room). So that added a new arsenal of robotics technology …