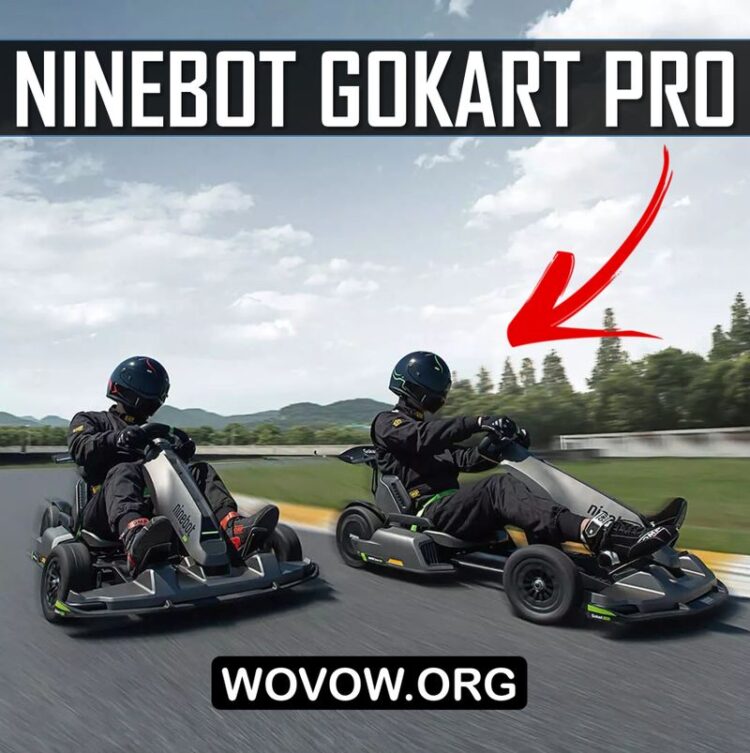 Xiaomi has announced the second generation of its Ninebot GoKart Pro electric kart. As you can see, the new Xiaomi electric kart is different from its predecessor in color. GoKart Pro comes in a stunning black color.

Let’s talk about other differences and features of the new Ninebot GoKart Pro.

First, I want to say that Xiaomi electric kart have many design awards. The manufacturer also says that the new kart was designed specifically for racing. In other words, this is not an ordinary toy, but a professional racing car.

Interestingly, the electric kart is adjustable, so children and adults can drive it. The minimum height of a person should be 1.3 meters, while the maximum is 1.9 meters.

There is an aerodynamic tail on the back of the electric kart for more reliable and stable driving.

The pedals shall be made of metal and covered with a special texture. The manufacturer claims that the pedals are safer and more durable.

In front there is a powerful LED flashlight, thanks to which you can drive on an electric kart even at night.

Also, the front of the kart is protected by a bumper, which soften the impact on various obstacles. This is really important for the racing kart.

The new electric kart Ninebot GoKart Pro has reflectors, which are used in Formula 1 cars.

This is another proof that we have a professional racing car ahead of us.

By the way, the new electric kart from Xiaomi is designed for a maximum weight of 100 kg. If you weigh more than 100 kg or you are more than 190 cm, then you are not recommended to use this kart.

If we talk about the battery, the electric kart has a capacity of 432Wh. Xiaomi says it is enough for 62 laps of the 400 meters track. That is about 25 kilometers.

It should be noted that the battery test was carried out on a flat road at the temperature of 25 degrees Celsius, while the weight of the driver was 75 kg, and the maximum speed was 18 km/h.

The Chinese manufacturer talks a lot about the racing design of the electric kart, weight distribution of 40% on the front wheels and 60% on the rear wheels, and much more.

However, I was particularly interested in the application. Yes, Ninebot GoKart Pro connects to your smartphone through the app. Using the app, you can change the power of the front and rear wheels. There are also 4 driving modes available, from basic to professional. Beginner mode has a maximum speed of 8 km/h, while professionals can drive the kart at a top speed of 37 km/h.

Another interesting feature of Ninebot GoKart Pro is four built-in 8W speakers, which provide sound racing effects. It sounds like it’s all been thought out in detail.

Where To Buy Ninebot GoKart Pro?

The new Ninebot GoKart Pro electric kart has just appeared on sale today on the Chinese platform YouPin at the price of about $1260.

Even if Ninebot GoKart Pro appears on sale in Chinese online shops such as Aliexpress, the price will be higher. In this case, delivery can be quite expensive, given the size and weight of the electric kart.

We are waiting for GoKart Pro to go on global sale, and it will be sold in local Xiaomi stores or its partners.