Noah Hawley: “Time jump is justified in every sense”

In the eighth episode of the new, but already acclaimed series “Fargo» (Fargo) fans of the show a little surprise waiting. The executive producer of this rich dark humor crime drama, Noah Hawley, spoke about the unexpected turn of events and plans for a second season.

So, from that moment, as Molly (Allison Tolman) was shot by Gus (Colin Hanks),but instead of Leicester (Martin Freeman) went to jail his brother, a year has passed. Lester became highly successful insurance agent and married his attractive employee, and Gus and Molly, who also live in a happy marriage, now expecting a baby. And then on the horizon reappears Lorne Malvo (Billy Bob Thornton) … 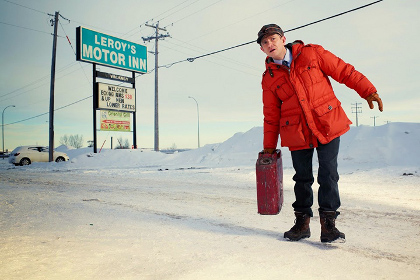 Why did you decide to move the duration of the series for the year ahead?

I like to think that everything happens in the show as well as in real life. And in real life, if such a thing is not revealed immediately, it hangs permanently or until such time as there is no something else. Once I decided that Molly would be pregnant, and the idea came about this time jump. Such an approach is justified in every sense. All of our characters also evolved. Just look at Leicester – it now does not know …

In some of the following episodes will show us what happened to the heroes during this time?

Temporary jump was registered in the script. And there was a moment when Gus and Molly lie in bed and the camera goes down, as if it were the final history … We are especially well done. And then the action moves to Las Vegas for some conference, and then the viewer thinks: “Exactly! I also have not told that there Lester” … This jump has propelled the story forward, and at the same time has become something of an epilogue.

Do we wait for the confrontation between Lester and Lorne?

Their new meeting certainly looks as if they were back together in the same room, for the first time … Since they are in fact more so and were not alone. I hope we were able to give the viewer a fascinating spectacle and create a complete story without any confrontations. But bringing them back in one place, we gave the fans what they’ve been waiting for.

What will be similar to the second season of “Fargo”?

If we take up the second season, it will be a new story with other heroes. But they are somehow connected with the characters of the first season of the original film or the Coen brothers. Hopefully, no one can predict exactly how …