Nokia X: the price is quality 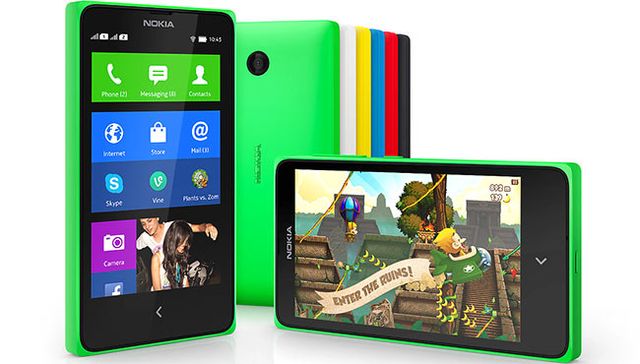 Nokia X is the new entry-level terminal that Microsoft has developed on the basis of Android to allow access to a greater number of app.

When judging a smartphone like the new Nokia X must first be from a fundamental premise: the price. The 89 euro indicated by Nokia for use with the device in fact define a precise market positioning, accurate and precise technical limitations outlined ambitions around the concept of “low cost”. Within these strict limitations on the Nokia X seems to be immediately at ease, showing special qualities that free themselves from those who are the current limitations of the devices in this price range.

The feeling is therefore that for which the strength of the concept is quite clear, although some gleanings can still be filed to aspire to true satisfactions market. 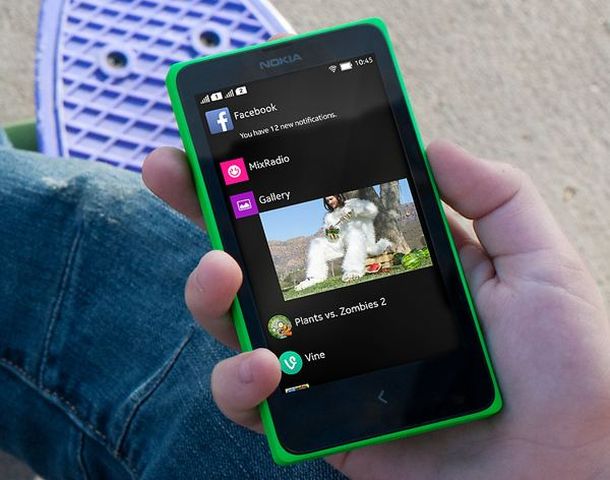 Nokia X is a smartphone with 4-inch display (WVGA 800 × 480 resolution, 15:9 display ratio and pixel density of 223 ppi) on which Nokia plans display functions such as “Automatic brightness control for energy saving, support touch screen, the screen orientation sensor, Display Nokia Glance and dual touch-sensitive screen. ” It weighs 128 grams and has a thickness of 10.4 mm (partly occupied by a removable cover).

The device consists of two parts: the core of the smartphone and the surrounding cover, easily removable and replaceable to change the look and protection needed. The buttons are allocated on the same cover and allow to control power and volume. On the back there is a 3-megapixel camera with fixed focus and a resolution of 2,048 × 1,536.

The processor is a dual-core 1 GHz Snapdragon S4 supported by a removable 1,500 mAh battery that can provide up to 28 days of stand-by mode. The RAM included is 512 MB, while the mass memory is 4 GB (extendable however, thanks to a microSD slot for an additional 32 GB.

The device is a dual-SIM card, thus allowing the use of two cards for the sake of saving or work. The two SIM cards, as well as the microSD card if any, may be included on the back of the smartphone, after removal of the cover and the battery. Battery charging takes place through traditional micro-USB socket. There are only 3 holes on the cover: on the lower side for loading, on the top side for the attachment of the ear and on the back side for the escape of the audio.

Since opening the package a feature catches the eye: the ‘single center button used on the display. Unlike the Lumia production, in fact, only the “back” button peeps, so inserting the device in the wake of more traditional Android that is not along the lines of Nokia’s high-end production.

Nokia X is available in 6 colors, all high-impact color: black, white, blue, green, red and yellow. Only one camera available, the rear: the absence of a front camera inhibits the possibility of a convenient video calling through the app pre-loaded with Skype, an element that could prove handy for a device that is a candidate to be a vehicle for savings and utility in the hands of users.

Nokia X is a smartphone that, unlike the Lumia series, based its software on Android. No green robot appear on the packaging, however, because the operating system is not purely Android, but it is the basis of development and is the marketplace for applications in which the smartphone is able to tap into.

By definition, the smartphone operating system platform hosting the Nokia X software, version 1.0. Under this nomenclature is hidden then the spin-off of Android developed by Nokia, something similar to what is in place from Amazon for your Kindle Fire . Updates to the operating system will be FOTA (Over The Air) and therefore do not require a connection to a PC in order to be installed.

Many apps pre-installed in the device, showing at first sight what is the focus of the project: to provide a broad and easy access to the world of apps, thus adding value to the device passing through the software. The richness of the Android store, in addition to the quality of the Nokia production, is therefore the “plus” of the platform compared to other competing solutions in the range flight

Among the app include many games (Tetris Ninjia at Fruit from Real Football 2014 SimCity Deluxe, through Bejeweled 2, Class Monopoly and others), but also connectivity tools such as Viber or WeChat and a browser such as Opera. To these must be added the names of all valuable items such as Maps and MixRadio Here, two elements that made ​​in Nokia device to offer free satellite navigation and listening at no cost music streaming (with a possibility to download for listening offline).

The interface design is inspired by the Windows Phone divided into “live tile”, but differs in functionality and gesture. The main point of approach between the two systems is the management of the icons, because the process of moving and resizing is completely analogous. Another analogy is the function Glance, ie the projection on the screen of some basic information (time and notifications) that allow you to have the perception of ongoing activities with just a glance, without having to forcibly turn the display on and unlock the screen protection.

The difference in the management of the screens instead of every other element. Nokia X allows you for example to move the screen is scrolling scrolling left and right, allowing them to move easily from the homepage to all the activities on the device. The ‘single button on the display (bottom, center position) is “back” that, when pressed, closes the app in use by returning the user to the home screen. The adaptation to this type of management of the pages is still simple and learning is immediate whatever the source user in terms of past experience in the mobile.

Always present on the interface are also available some basic elements for activity on the device: the symbol of the Wi-Fi connectivity, the remaining charge indicator and the icons for the two SIM card (so as to have always present with which you are acting at a given time.) is not always intuitive use of the keyboard, which probably deserves some simplification in order to be used more easily, but it is known that the interaction systems are those that adapt more quickly to the needs of users when a platform took his first steps. We would expect, therefore, an intervention that simplifies the QWERTY graphically on the display, reducing the graphics to optimize the retrieval of the symbols most commonly used and maximizing the size of the buttons.

Nokia X is reactive. Each evaluation in terms of performance must start from this assumption: despite the technical equipment typical of a low-cost device, such as the interface the app respond rapidly, thus highlighting performance up even when it comes to high-end devices and it is therefore accustomed to the next immediate response times. Although some difficulty is encountered in extreme cases gaming app on the most demanding, in general, the experience is quite positive and no friction occurred in a particular way on the app more common usage (browsing, music, messenger).

Particularly positive was the sensation returned by the touchscreen: touch responsiveness and speed of scrolling of pages are the basis of the experience of use of a smartphone and the Nokia x on this point appears immediately return a reply value.

The media are not the strongest of the Nokia X and in this sense the limit is all in the structural elements and technical features of the device. Appears vaguely annoying, for example, listening to sounds while holding the device (instead appreciable volume reached), since the hand easily goes to rest on the rear slot from which the sound comes out, causing a perceptible vibration is not pleasant to the touch. The listening ear feel much better returns, thus rewarding the user experience of music files, while it is doubtful lower expectations in terms of ringtone.

No problem was detected during call: good sound, good reception. Once again, we do not recommend the use of hands-free if they are expected communication quality since the passage of sound through the rear slot shows all the limitations of the case. Easy removal of the SIM: the opening of the cover takes just a few moments and is sufficient to rely on the battery to gain access to the two available slots.

The camera has a capacity of 3-megapixel camera with FWVGA resolution (864 x 480). Notwithstanding the fact that the technical equipment can certainly make the prelude to absolute image quality, noticeable is the ease with which the shots can be stored or shared social network. The major limitation of the camera is in focus mostly fixed, but the quality is quite good, however, when compared to devices of equal price. The possibility of using a manual zoom through interface is such a valuable function, as well as the possibility of creating panoramic photographs (with all the limitations of the case on the final result), and the various modes of white balance in video recording (cloudy, fluorescent , incandescent, automatic, daylight).

Nokia X is only the first step and in view of the investment Microsoft is a piece that is complementary to the project Lumia. Fact X does not use Nokia’s proprietary platform Windows Phone and draws from the world of Android app to reach out to some specific market segments: those looking for the world’s low cost, who is looking for a first experience in the smartphone world (perhaps attracted by WhatsApp or similar), those who need a dual-SIM easy to use and low cost.

Nokia X has two elements edge over the direct competition. First of all, the name Nokia is synonymous with durability and quality in detail for those who come from the world of Symbian or for those who possessed the products for a long time. In addition, a strong element of meaning can be the Nokia Here: 89 € in spending can in fact have a smartphone (with all the functionality available to it) and a navigation system quality (in all respects similar to that available on the Lumia range).

Some teething troubles will disappear in a short time, especially in terms of software (it is advisable, however, a first access under Wi-Fi coverage, because many updates are already available on the built-in apps), but right now it looks like Nokia X can new opportunities in the hands of users who are looking for a “phone” above the basic elements for savings, comfort and utility.