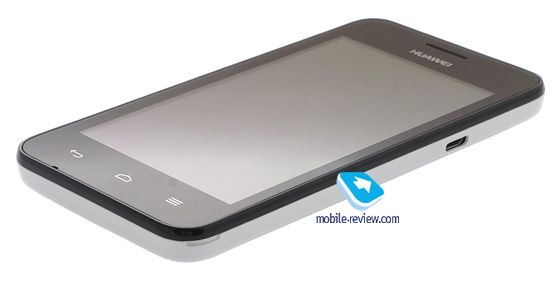 This summer, the Chinese company Huawei began selling in Russia, extra-model smartphone Huawei Ascend Y330, the value of which does not exceed 3 000. Novelty equipped, given the price, relatively large screen – 4 inches – with adequate resolution of 480×800 pixels. Inside the “works” dual Taiwanese chipset MT6572. Your machine has a 3-megapixel camera, two slots for simkarty standards and micro mini, one of them is able to operate in the third generation network

Very briefly to the external form rectangular shape of the body, compact size, the abundance of glossy plastic, rather thick. In principle, this can be and finish 🙂 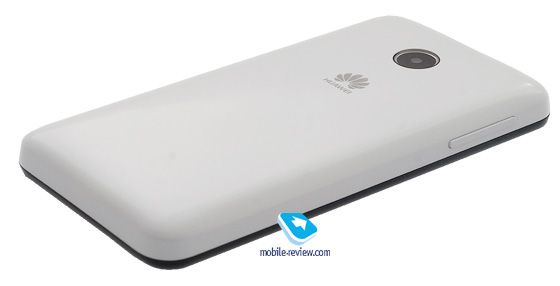 The front panel is protected with plastic as the surface is exposed to scratches. Or glue the film, or take particular care with your phone.During the tests, the display will show two deep scratches. More likely to have an oleophobic coating as fingerprints almost gone. On plastic (screen) finger glides freely.

Thin frame around the perimeter, slightly above the casing is made of glossy black plastic. Backplane – glossy white plastic. There are two versions of the gadget: white and black colors. In the latter case the material is opaque, with irregularities.

Assembled unit perfectly: the cover does not creak, do not play, do not be pressed to the battery. When compressing the body is not crispy.

Voice speaker (aka handsfree speaker) located on the front of the gadget. Its volume is slightly above average, the interlocutor can hear clearly and legibly, mostly tapped mids. Echo and other extraneous sounds are absent. For the budget unit speaker, I thought, pretty good. 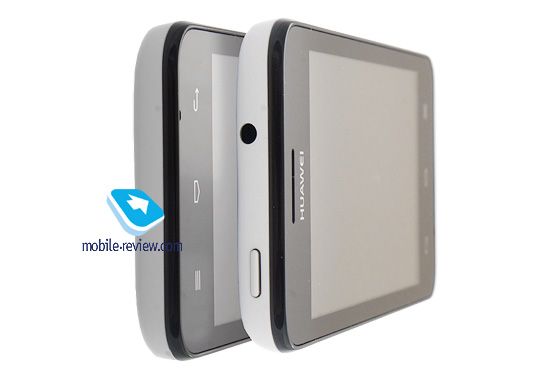 Here you will not find a light sensor or proximity sensor. The backlight turns off after a while, but it is better to lock the screen, although for the time being accidentally pressed his cheek against the use of the button to cancel the call did not happen.

Beneath the screen are touch the “Back”, “Home” and “Menu”. They are marked with silver paint on the body, no backlight.

The microphone is located under the “Back” button. You hear good sound relatively clean.

On the right side – micro-USB, on the left – a key-volume rocker. Made of white plastic protruding from the housing, well fingers groped.Above – a standard 3.5 mm plug and chrome power button (it – lock screen, backlight activation). Its course a little, holding down the middle.

Close the eye chamber, slightly recessed in the cover, located on the reverse side of the device. 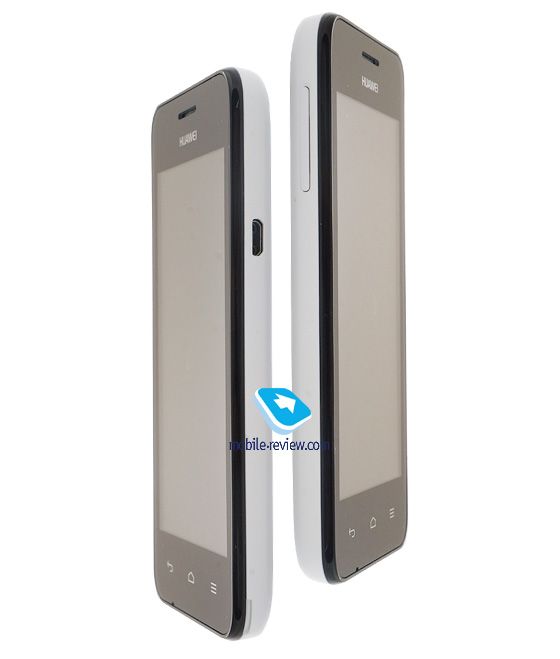 To remove the socket, it is necessary to pry the recess on the bottom left corner. Over a removable battery – microSIM (only works in network GSM) and miniSIM (works in GSM and WCDMA). Above left – connector for microSD memory cards.

On tilting the device from a color display are reversed itself – has deteriorated sharply contrast. Backlight brightness matrix screen slightly above average: the image is visible in the afternoon, but the sun all fades. Between the cover glass and the matrix layer of air is present. 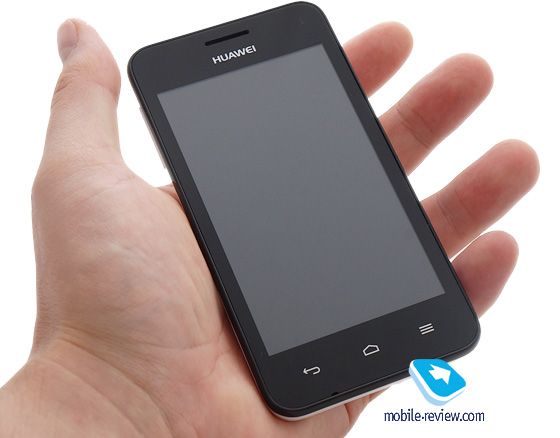 Sensor layer capacitive fulfills up to 2 simultaneous touches (“multitouch”). Sensitivity is good, no problems found. The brightness is governed by the matrix, either automatically or manually in a fairly wide range.

The average operating time Y330 – about 7 hours. Here I include the operation of the device in 3G, infrequent calls, a couple of dozen photos on the camera and some other not very important activity. If you use the machine as a video player, you expect about 3 hours, with an average brightness and listening to the sound through the headphones. 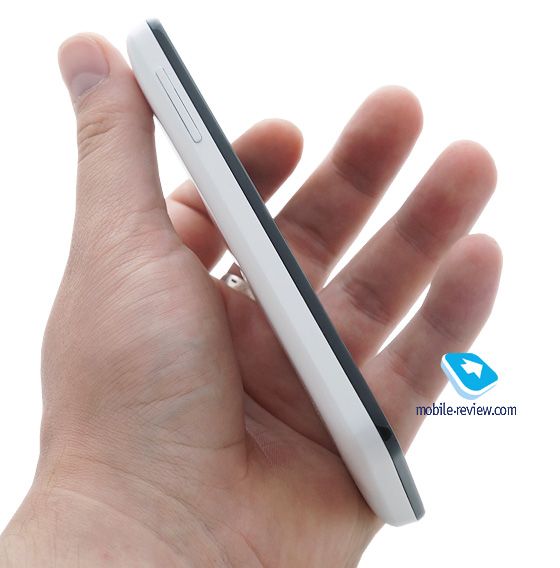 Charging the battery from the regular AC adapter or USB is about 2.5 hours.

Available Bluetooth version 4.0 for file transfer and speech. There is a wireless Wi-Fi IEEE 802.11 b / g / n. The apparatus may naturally be employed as an access point (Wi-Fi Hotspot) or modem. «USB On The Go» does not work!

There is a GPS. Its sensitivity is quite good: the “cold” mode for 20 seconds is up to 3 satellites in a room near the window for 10 seconds – up to 5 satellites, an open space for the same time – up to 8.

As with most similar devices, Ascend equipped with 512 MB of RAM. Average freely just over 100 MB. Flash memory of 4 GB, but is available, as always, is much smaller: 2.14 GB to install applications and data storage.

There is a slot for memory cards microSD. Its maximum volume can be 32 GB 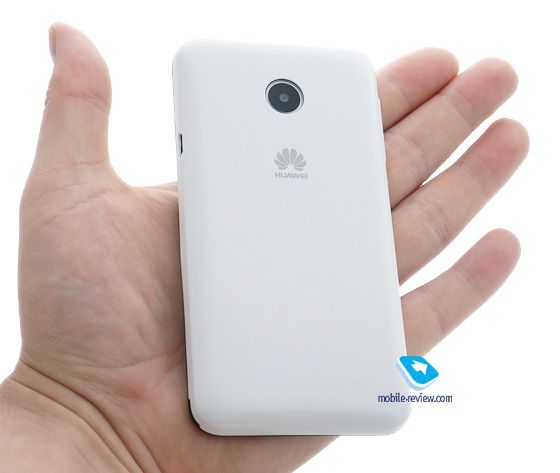 Quality corresponds to the number of megapixels and price – that is mediocre. Video unit removes at 640×480 pixels at 30 frames / second.Module is weak, therefore describe in detail the meaning can not see.

Of course, it is worth the chipset from the Taiwanese manufacturer MediaTek. Chip called MT6572 – are two core ARM Cortex-A7 (28 nm process technology) to 1 GHz. The graphics core – Mali-400 (500 MHz).

Toys are almost all, but of course, you should not rely on heavy “Gama” with full graphics.

Uses standard music player Huawei. The headphone volume is average: in the subway or on the street be heard bad. I liked the sound quality.

Volume of the main speakers (it is also spoken) is low, at some frequencies wheezing. If the hole is closed, then the volume will be reduced by 50%.

Video smartphone plays in the resolution to HD in low bitrate.

Once again, that Huawei Ascend Y330 refers to extra-smartphones. To date, it will cost a little less than 3 000. Its value is fully justified in spite of the unsightly appearance and the presence of only one speaker, in the Y330 has two slots for sim-cards, the device operates on 3G, the camera shoots normally, the screen has a minimum resolution of standard-modern phones.

Explay Atom. Costs a little more than 3 000. Provided with two cameras and a battery 2000 mAh.

Alcatel POP C3. Can be found from 2500 rubles. Analogue of Huawei.

Lenovo A316i. It is worth a little less than 3000 rubles. Analogue of Huawei.

MegaFon Optima. It should be about 2 000 with connecting TP, without it – about 3000 rubles. Analogue of Huawei.

Keneksi Wind. It is worth a little more than 2500 rubles. Stands 5 megapixel autofocus camera.