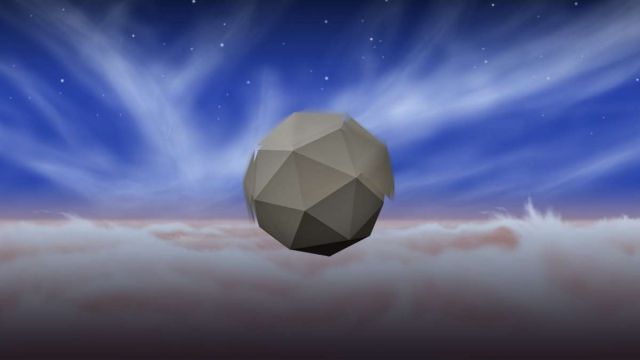 Concept drawing Windbot. This geometric robot will be able one day to explore the skies of the gas giant. To control the flight of his hand can be opened and rotated.

Jupiter and Saturn – are two of the least explored planet in our solar system. Because they are gas giants, they have no surface to which it would be possible to land and their environment crushingly heavy and very windy.

The spacecraft “Galileo” threw a probe into Jupiter’s atmosphere in 1995, and an hour later, he was gone. In 2016, a spacecraft NASA, Juno, the second time in the history of mankind will enter the orbit of Jupiter, to see whether he has the core. Saturn also investigated exclusively obletnymi missions and one orbital. The data are forwarded to cell phones in the past, not as detailed as those that can be obtained by flying through the crazy atmosphere of the planet. To do this, NASA scientists are developing “windy bots”.

Such bots, so far, only a concept. NASA is not quite sure what these robots will look like and how they will work, but the team has some ideas. They are designed to remain in the atmosphere of gas giants, while not relying on balloons or wings. Instead, they will consist of sections that will be advanced and rotated, creating thrust as a dandelion seed.

In order to generate the energy required for the flight and atmospheric collection of scientific information, the bot will be able to move because of air turbulence, by using it to charge the battery (some hours charged by shaking) – according to a press release from NASA.