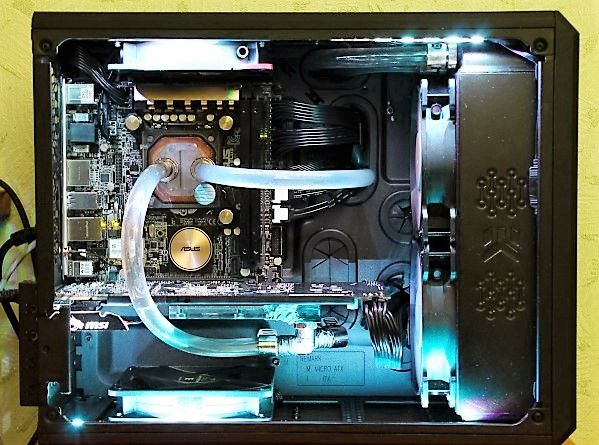 Computer Cases from Corsair’s long established themselves among the vast range of users. We are already familiar with one of them, remember – it was the Corsair Graphite Series 780T , which is based on the results of testing has established itself as a quality case with the possibility of modern components and the organization of the water cooling system.

However, 780ty not so modest in size, not everyone can find a place for a neat arrangement of the body, especially in our time is to popularize minimalist systems, many are looking toward a more compact package.

Today we look at the housing Corsair Carbide Air 240, which has a much smaller size, but it can boast no less interesting engineering solutions that we could see from the “big brother”. Therefore, I propose to go to a more detailed inspection. A photograph of the box, richly embellished with tape a pair of courier companies, with your permission, I pubescent :).

Corsair Air 240 comes on the shelves in two color variations Black and White, I believe that these names speak for themselves.Yes, the difference is only in the color of the outer decorative panels, which we’ll talk. The rest of the features and functionality of the completely identical. 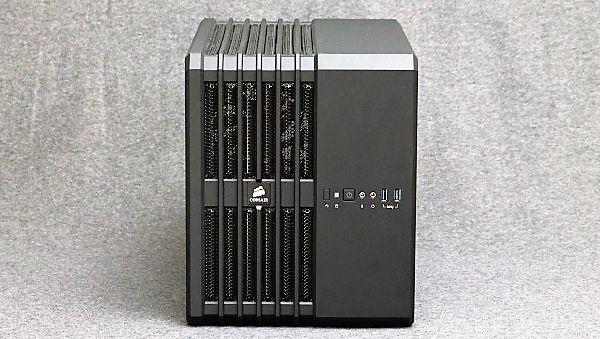 For us to review the option came in black, met him. You can just say that we considered Corsair Air 240 is an analogue large Corsair Air 540. A distinctive feature of both is the division of internal space into two areas.

To begin, Air 240 has dimensions of 260x320x397 millimeters (greater depth side is less than the width of the relative photos below). With such dimensions are lots of options out of the box is not small 5.6 kilograms.

In my opinion, visually 240’voy made in a very simple design. Here was a place a straight line without the rounded edges. Even the transitions between plastic components are straight cuts. It looks impressively area of ​​ventilation holes, it continuously through all faces of the body (except the back wall) and a “slot” in the form of conventional lines, behind which is hidden net basis. 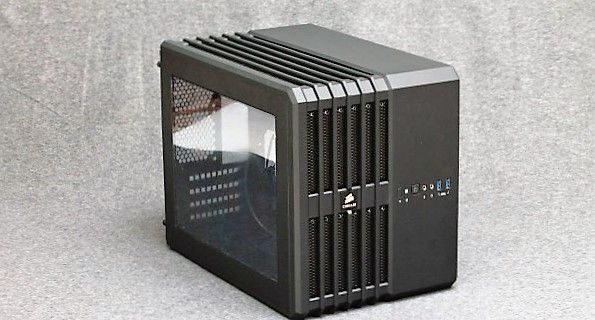 The front side of the housing design and the implementation of strict no different from the rest of the body. There was a place for the rating plate with the logo of the manufacturer, and also provides space for the functional elements.

Exactly in the middle settled power and reset buttons. To display has a pair of white LEDs for status switching button it is monolithic, and to reflect boot hard drive isolated in a separate area. Next is a pair of audio connectors mini-jack 3.5 connector and two USB 3.0.

The reverse side of the body due to the arrangement of elements looks quite unusual. Here you can see the approximate ratio of the inner regions: the left is the power supply and the area for mounting drives on the right is a standard area to the motherboard, the plugs and a pair of expansion slots fans.

The side wall, looking at the layout of the main compartment has a broad viewing window. It is made of transparent acrylic and overlooks almost the entire area of ​​the inner section. When transporting a precaution pasted over film.

Side panel, located on the back side, made in a more “technical” version. It is located a perforated region, realizing the air supply to the installed power supply and the possibility of an additional 120 mm fan. Perforation closes removable filter, which is made of fine mesh and easily attached to the body using magnetic tapes. The side walls as the main body frame, made of cold-rolled steel SECC thickness of 0.6 mm.

Regarding the above presented photos, the lower part of the body as a decorative panel made of plastic and visually highlighted.This is done on purpose, to be able to change the location and transfer of the housing into the “desktop tower.” In the scope of delivery has legs that are free to the user at their discretion stuck on any of the relevant parties.

This concludes with the inspection and proceed to an internal inspection. 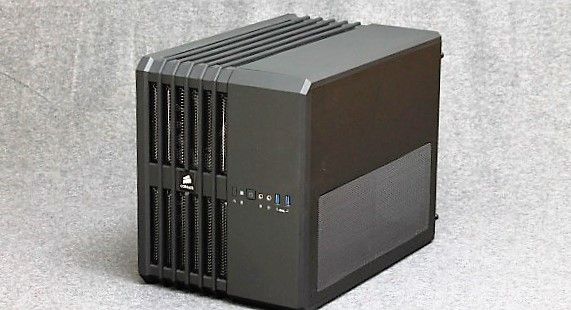 As already mentioned, the internal component Corsair Air 240 is divided into two functional compartments. In this case, the role of delimiting partitions performs a so-called tray for installation of the motherboard. The hero of this review may take on board your motherboard form factor MicroATX and Mini-ITX.

In an empty building, no radiator can install two graphics up to 290. It should be borne in mind that the video card, as well as the CPU heatsink maximum height is within 120 millimeters. In the case of the processor CPU cooler height is an important issue, but the height of the video card can be forgotten.

According to the manufacturer Corsair Air 240 refers to a group of buildings, the use of which is possible to implement a system with a very powerful airflow. For this 240’voy have enough seats for fans.

The first area, which we have already mentioned, is the place for two 80 mm fans on the rear panel. Pretty interesting to see this form factor in our time, but for compact systems, this is a completely standard approach.

The front side has a pair of seats for two look familiar stodvatsatki. By default, there is preinstalled pair of Corsair A1225L12S-2.

Similar stodvatsatka alone is on the upper side, next to a vacant place for another one. It should be noted an interesting approach to the implementation of the seat, it is not strictly fixed, the fans can be moved along the rails in one direction or another.

A similar seat for two stodvatsatki located on the bottom (or side, depending on the location of the body). It must be recognized that the possibility to mix the position of the fan is very convenient, you can direct the flow of air is more correct.

The second section of the body initially looks quite deserted, but trust me, the situation changed after the assembly of the system. The power supply and most of its cables will take a lot of available space, and in the case of installation of the pump and the expansion barrel for the water cooling system becomes all the more interesting.

Incidentally, for the interaction with the basic “compartment” is six, but rather seven technical apertures. The main six to be on form and has a special rubber guides for greater practicality. Another hole is located near the CPU power connector, but taking into account the availability of storage baskets, do not get to use it every cable (requires a flat, round will not :)). 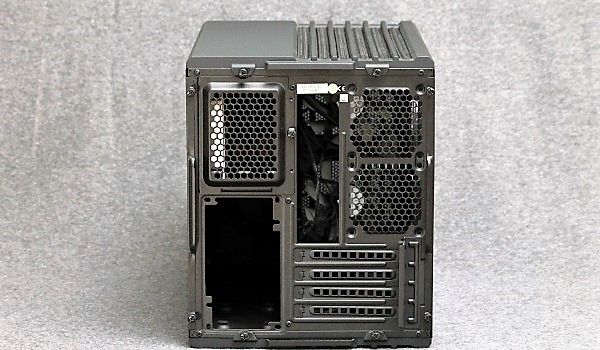 The Corsair Air 240 are no restrictions on the length of the power supply, of course the need to install massive BP is not always necessary for compact systems. But in the case of MicroATX motherboard with graphics cards in tandem, a good PSU is clearly relevant.

Thanks to a standard basket in 240’voy can install up to six drives. Three seats are for 2.5-inch disks, the other three are universal and can be taken on your side and a 3.5-inch drives. It may be noted that the housing does not support a 5.25-inch device

The drives are installed quite easily accessible 2.5 inch drive sled carried by dismantling one of the plastic panels. Here you can change the location of the fan, or add another.

Access to the slide 3.5 inch drives even more convenient, they go straight to the back of the housing. Small mesh grille with “do not lose bolt” and can be installed drives. Of course, the cable connection will still have to open the side panel – a kind of docking station is not provided. The carriage drives to standard plastic, allow to fix the disk without the use of screwdrivers (for the 3.5 form factor) and a small anti-vibration pads.

So we got to the supplied, which by default has been neatly stowed in the side and locked in a sled for storage. Included was a place for rubber feet, a small number of bolts and ties neatly laid out on a small package. Of course, a fairly complete instructions, good detailing the entire assembly process.

That came the turn to build the system. I will not give a complete description, everything is totally dependent on the components that you want to install. Below is a photo of the finished system, resulting in the course of my investigations J. Minor comments and general conclusion, with your permission, I will combine.

So, Corsair Carbide Air 240 a really stout body. Under Q I understand the good materials and quality of fit. The idea of ​​zoning internal space came to my taste, it allows you to split the components used on several levels. Not to say that this separation allows the system to collect more than a neat, if you want it can be collected in the normal case, but Air 240 is made much easier;).

During assembly, immediately recommend to separate all decorative panels of plastic – it will simplify the process and avoid possible scratches. Overall, I was able to accommodate components similar to those we used in the assembly on the basis of Corsair Graphite 780T. Of course, it is applying a different motherboard, but place the cooling water system was easy.

The manufacturer claims the possibility of installing two 240 mm radiators for water cooling system. Perhaps it is possible to carry out, but only when using the motherboard Mini-ITX. The fact that both the radiator and the fan is engaged in the inner space of the housing, thereby reducing the available dimensions. And when you install MicroATX lower and upper region likely will not be available.

Do not forget to mention that some users like desktop mode and inverted position, which will look very exotic.

By shortcomings include housing rather noisy fan preinstalled in the normal mode, the manufacturer would not hurt to add a little reobas by analogy with the same Graphite 780T. Do not forget that the body is no support for 5.2 inch panels for the installation of additional devices of this type, the slaughter of good-quality slots on the motherboard.

Furthermore, the cooling system of hard drives is also not so good when you install three drives, they are located quite close, and installation of the fan in the other part of the bay is not very conducive to cooling. Perhaps this would not prevent a 80mm spinner mounted directly opposite the drive. 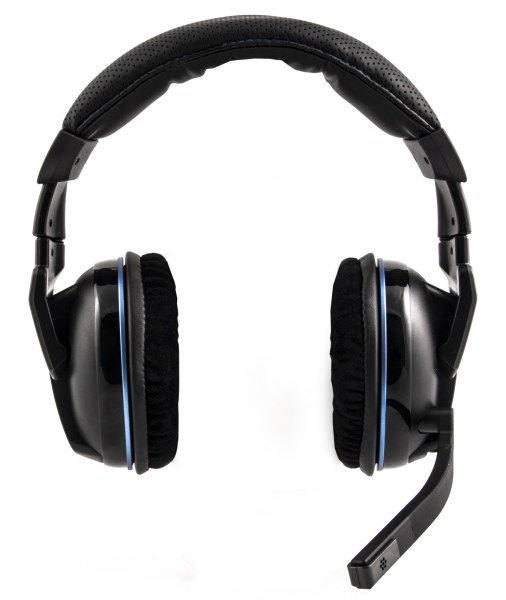