Review of the Gigabyte P55K v5: features and specs 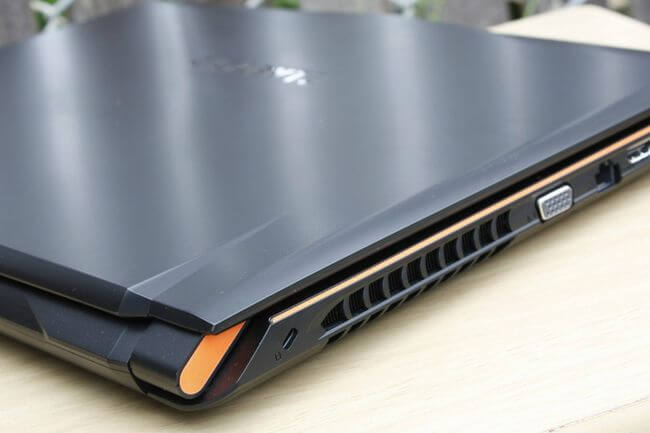 Gigabyte P55 v5 – another 15.6-inch gaming laptop with fresh fillings. Coping with the appetites of gamers who do not suffer from excess money is intended to relatively rare card GTX 965M. The more it stands out against the background of numerous other models?

In the context of a new line of P55 P55K v5 is not far P55W v5 predecessor: the appearance has not changed at all, the CD-drive and a VGA-connector preserved, the main changes relate to the graphics card, display and transition to Broadwell on Skylake.

The design repeats another model line, but the pall had not yet. The matte-black plastic case stands catchy bright orange accents, but use them in moderation and not at all over the top with them. The front edge is beveled, which visually reduces the thickness of the device. Plastic is easily covered with fingerprints, especially on the touchpad and keyboard.

To build quality have remarked as a keyboard, and cover a little flex when pressed in the center – would like to see in future versions we made them tougher. The hinges are quite stiff, the maximum opening angle is about 135 degrees.

To access the innards of the laptop quite a Phillips screwdriver. The bottom cover is removed entirely and provides access to the 6-cell battery, optical drive, the WiFi-map, the SSD, hard drive … None except that only the possibility of processor replacement and video card present in some of the larger gaming notebooks, such as the GT72 or Eurocom DLX7.

Dynamics lacks bass, the higher the volume, the more it becomes noticeable. The overall sound expected better than a typical ultrabook but worse than the models with a separate subwoofer.

For all its modernity filling P55 series is in no hurry to part with any CD-drive or with a VGA connector. It is possible that once these items are standard specifications, and now rapidly go out of fashion for some features will become a separate occasion to draw his attention to the Gigabyte P55K v5.

Lovers of more modern ports may be disappointed lack of DisplayPort and Thunderbolt 3, although many will be glad and HDMI 2.0 with USB Type-C Gen. 2.

The grille of the cooling system and an optical drive make the ports be grouped at the front, which is not very convenient. Also, note that the SD-card is difficult to remove or insert, without raising her laptop.

The island keyboard pleasantly pleased with the depth of stroke: 2.2 mm against the usual 1.5 mm. The height of the keys has also become more and closer to the desktop. A clear return completes the picture: on the feel of the keyboard has turned one of the best notebooks. Essentially it can surpass except giant MSI GT80 with mechanical switches.

The touchpad is not as gorgeous as the keyboard. Its size is 10 x 7 cm, minus the lower area for the buttons is 10 x 5 cm. The touchpad of this size occur in more compact notebooks, and we think that he could be here and more. Or at least wider. I would also like to criticize the touchpad buttons: you need to press from too great, and they turn shallow.

The display is ready to boast high-quality IPS-matrix AU Optronics B156HAN01.2 with a resolution of Full HD, installed also in other powerful laptops such as Acer Aspire V5-573G or some Clevo models. 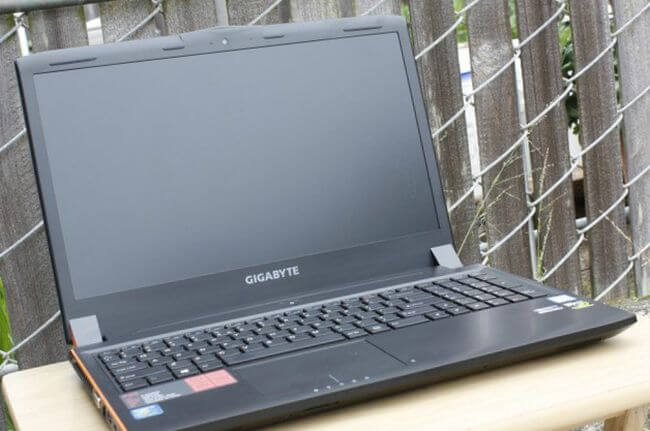 There is a non-uniform illumination of the image along the edges, is most pronounced in the lower right corner. It is noticeable in dark scenes when downloading and watching movies with black bars.

Color reproduction is good and without calibration, but for saturated colors is limited by incomplete coating color spectrum: 59.2% and 90.9% for AdobeRGB and sRGB respectively. However, for a gaming notebook is more important than other parameters, such as response time.

The response time indicates how fast the display device is able to change the color of the image from one to the other. It is not enough fast response can lead to deformation of the moving pieces of the image, the appearance of shadows and blur. The absence of such issues is especially important for watching movies and games.

Some devices set the brightness of the screen with the rapid on-off light-emitting diodes instead of simply lowering their voltage. This illumination method is called frequency modulation, or PWM. It often leads to strips or ripples in the image, as well as the rapid eye fatigue and headaches. This test allows us to understand whether the PWM is used in a test device.

Statistics: 56% of the known PWM devices do not apply to changes in brightness, and among those, where the PWM is used, the typical modulation frequency of 538 Hz (min 43 Hz max 10,420 Hz..).

Outside matte display, though not much glare, but still can not cope with sunlight due to insufficient brightness. And the text and images fade even in cloudy weather, do not save the situation and wide viewing angles IPS-matrix. On the other hand, gaming laptops are rarely selected on the street.

The notebook is equipped with a processor Intel Core i7-6700HQ, memory type two slots DDR4 a total volume of up to 32 GB and the graphics card GTX 965M. Nvidia Optimus technology enables switching to the use of the integrated Intel HD Graphics 530 GPU to save battery power.

According to the benchmark, CineBench processor outperforms i7-4700HQ (Haswell) and is roughly on par with i7-5700HQ (Broadwell). In general, the processor is very fast for, but inferior to desktop i7-6700K, installed, for example in the Eurocom Sky DLX7, almost 30 per cent. But at i7-6700K and heat twice as high (91 watts versus 45 watts).
More detailed performance test results are shown in the rating processor.

Results PCMark 8 approximately correspond to other gaming notebooks such as Asus GL552 or Acer Aspire V15 Nitro. During our testing, there were no hardware or software failures of the test specimen.

The laptop compartment is present as a 2.5 “SATA III (9 mm), and a single slot M.2 2280. RAID Support is not, and the optical drive is not designed for rapid transformation into another slot 2.5”. In our test sample mounted SSD SanDisk SD8SN8U1T001122 1TB hard drive and Samsung Spinpoint ST2000LM003 2TB.

GTX 965M successfully closes the performance gap between the mass of discrete graphics cards (GTX 960M and younger) and prohibitively expensive and powerful GTX 970M and GTX 980M. Recent need laptops with higher resolution, and for Full HD and 30 FPS at high and maximum settings should be enough GTX 965M.

For more information about the performance and additional comparisons with other GTX 965M graphics cards are shown on a separate page. 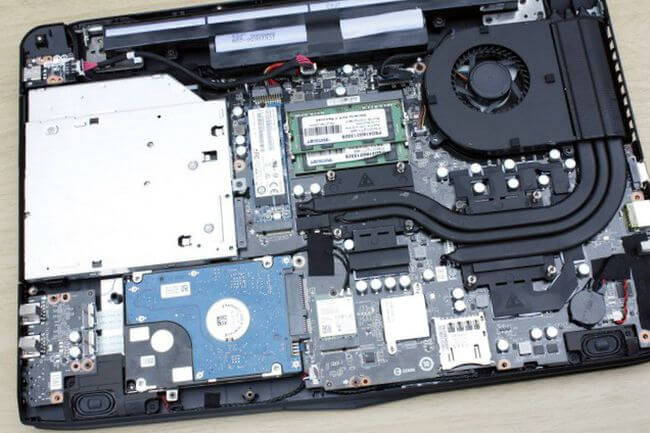 Gigabyte P55K v5 showed himself perfectly under load. Maximum temperature is very close to 100 ° C – a normal thing for Gigabyte and Aorus, to squeeze out the maximum performance of their laptops. The simultaneous launch of Prime95 and Furmark reduces the processor speed, but not the video card (which is and continues to operate at frequencies exceeding 924 MHz core).

The benchmark Unigine Heaven video card stable at high frequency 1253 MHz and the processor frequency ranges from 2.4 GHz to 3.5 GHz, depending on the demand. Wherein the temperature is kept at 70 ° C. Unlike other laptops, P55K v5 throughout this often lowers the dough and increases the fan speed so that the noise level in the games to be relatively unstable.

The fan rotates at all times and always discernible noise, even when the power-saving profile. On average in the test Unigine Heaven kept the noise to an acceptable level for a gaming notebook in the 40 dBA, however, as mentioned in the previous paragraph, the fan volume is not constant and throbbing, occasionally reaching 43 dBA.

In simple surface temperature is uniform. Due to the location of heat pipes left half of the notebook under load becomes much hotter. Thus, the QWERTY-keyboard unit is generally warmer and digital with increasing load difference is only growing.

Power consumption in idle mode is 10-15 watts. Under load P55K v5 consumes an average of 75 watts, while the maximum – 144 watts. That’s more than some laptops with the GTX 960M, but less than that of the models with the GTX 970M. 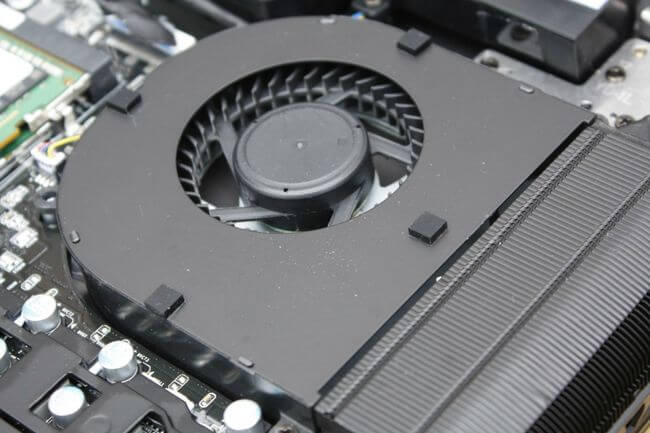 Using the Internet with the brightness of 150 cd / m² defuse P55W v5 for about 5 hours. For a gaming notebook is not bad; those to whom it is not enough, you should pay attention to the XPS 15, 9550 with the battery more.

A key feature of the model – the graphics card GTX 965M. The difference in performance compared to the GTX 970M is about 25%, and most games in Full HD resolution will keep stable 30 FPS and more even at the highest setting. If it is enough, why not save 10-20 thousand?

The rest of the Gigabyte P55K v5 – a typical top-end gaming notebook. Bright design, quality display, high-capacity hard disk drive and the SSD, noise, heat and limited autonomy – everything is in place. Some people enjoy the presence of the optical drive and the port VGA, someone would prefer to see in their place another slot 2.5 “and DisplayPort. 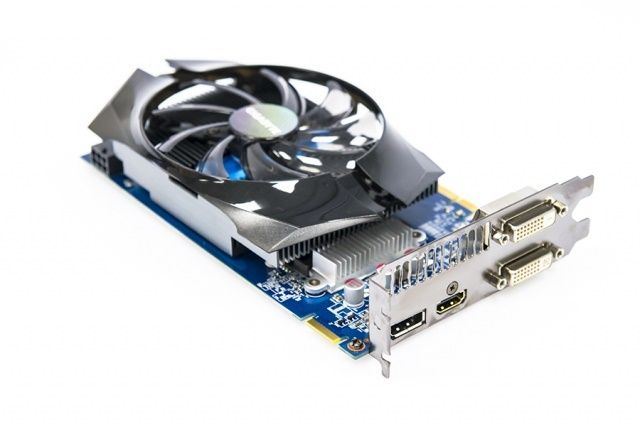 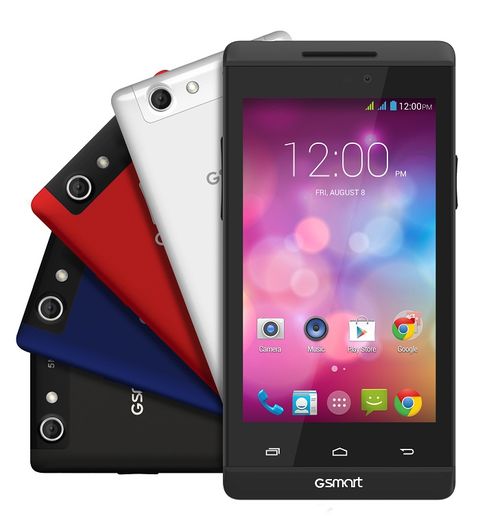 GIGABYTE has introduced a new line of smartphones GSmart 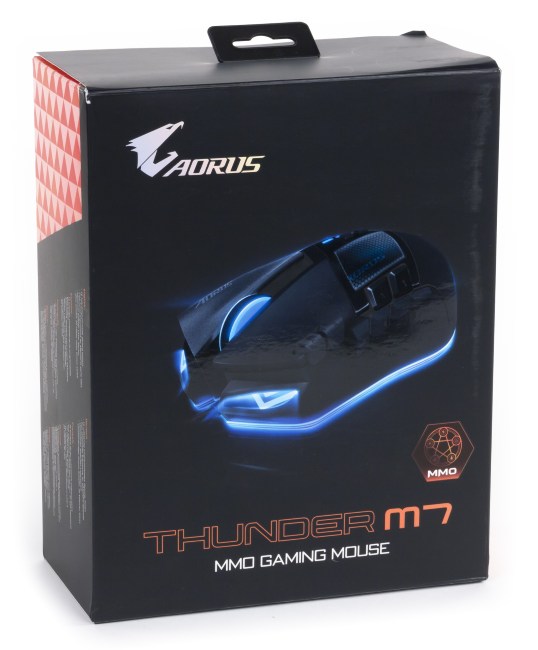