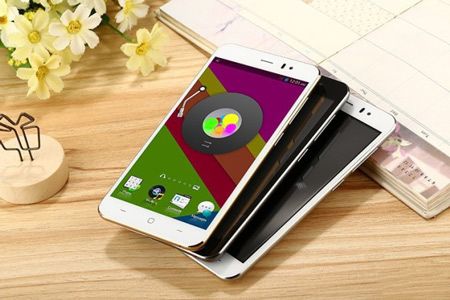 Mpie M10 comes in a cardboard box of unpainted. As you can see, there is no markings.
I guess that this is a smartphone, but not any of the Oise bearings can only be the size of the box – it is usual size. At least for me.

But the surprise package.
It includes the following items:

Such a set of rarely see, however, the quality of all accessories is poor. But on the cover to stop more as us so infrequently gets:

Not only is it printed design, so more and the flash can cover with a special window. I can not imagine why someone might need her physical closure.

And now it is time to briefly run through the appearance and design of the experimental. 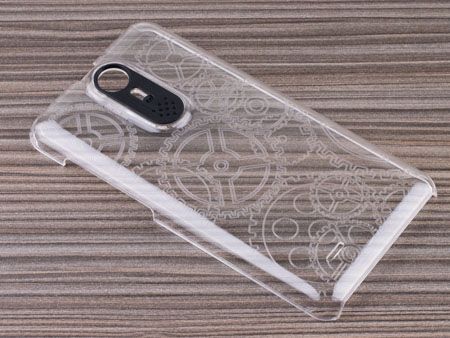 From the Mpie M10 is the most common type of monoblock smartphone with a touch screen. The design is very typical and nothing remarkable no different.

STATEMENT size does not correspond to only the thickness, according to my measurements it is slightly less than 10 mm and not 8.5 mm, as specified by the manufacturer. The weight was 156, the housing is made entirely of plastic. The back cover is colored.

Of course, the manufacturer did not burden themselves with the processing of joints and seams.

Keys got a small gap, but pressed clearly.

Inside, we are waiting for an interesting picture: a three-story slot for two SIM cards and a memory card. CALL speaker consists of a single emitter.

Here is a “marvel of engineering.” By the way, remove the memory card from the first “Floor” is not easy, especially if the top is installed SIM card. In addition, in this picture can be seen are loose loop.

Since logo printed anyhow, the quality of printing and can be no question. Here’s an example of the inscriptions on the battery.

As expected ultrabudgetary machine, production quality PV modules is low, the front camera lens is not even equipped with spraying, and the size of the back of the camera lens is not encouraging. Looking ahead, we note that both cameras have no autofocus.

We should also point out that the smart phone is not equipped with any illuminated touch keys or LED-indicator events, or even proximity sensor, although the protective film has a slit for both sensors.

Any light sensor, but firstly it determines the light intensity in increments of 20 lux, and secondly – shows absolutely inadequate values. But, as we shall see below, he actually in the unit is not needed. Absolutely. 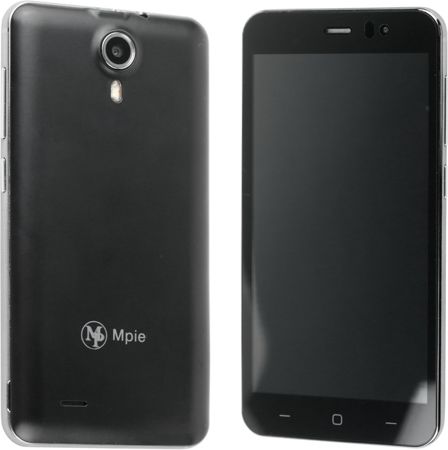 And now a brief look at screen Mpie M10. On account inflating diagonal did not, really set a five-inch matrix.

But the resolution as soon it was possible to guess much lower – 960 x 540 pixels, which is clearly evident from the size of the screens, and many programs determine this value.

And now for the “dessert.” The manufacturer claims the use of SoC MTK6752 together with 4 (!) GB of RAM. Interestingly, directly from the Play Market utilities like CPU-Z, it is not. However, by simple selection of this utility with difficulty, but set:

As we have seen in the last issue, cheat CPU-Z is quite simple, at least to replace the model of the chip and the number of cores, but the core architecture is more difficult to replace, as the system is compiled for a specific architecture. Moreover, clearly visible mismatched graphics accelerator Mali-400 MP, instead Mali-T760 MP2.

However, CPU-Z reports a confident eight processor cores. In fact, only two of them:

This conditional performance of each core is 1994 bogoMIPS, suggesting that the real clock frequency of the nuclei in the vicinity of 1.0 GHz.

In practice, the processor is as follows:

Two cores operating at maximum load at the frequency 1150 MHz, the other six displayed only inactive nuclei.

So what we get:

It is not difficult to guess that we are talking about the old familiar MediaTek MT6572. Just think, just five and seven places mixed up, who does not happen. 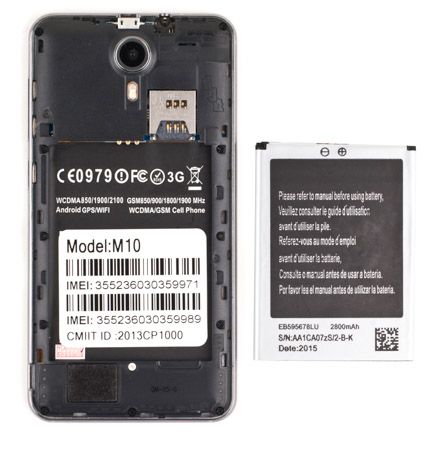 One of the obvious advantages of the model was named version of OS Android. The manufacturer specifies the use of version 5.0 Lollipop.

Funny looks and the line “communication module firmware: MTK6752.” Apparently, it is necessary to ensure that the user does not have any questions about what chip is inside.

But my humble user experience suggests that the fifth version of Android looks a bit different.

In fact, we face the most common Android 4.4 KitKat preinstalled launcher iBingo.

Because of the apparent lack of RAM is constantly loaded topic of “swap”.

The manufacturer took care of the work, even with gestures, but the implementation and operation of these functions is poor.

Root-access initially closed but not locked boot loader. However, it is entirely in Chinese, so that flashing may have problems. 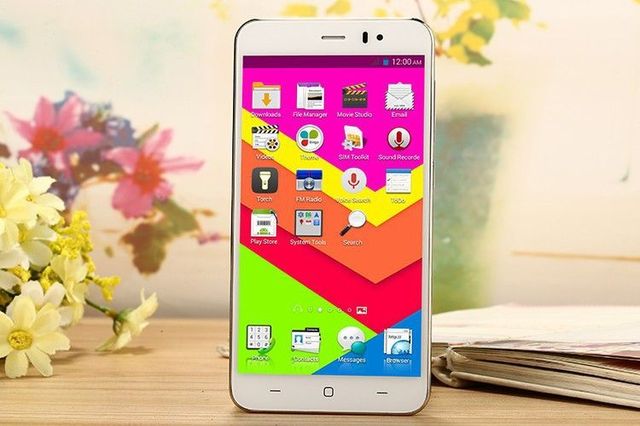 Test different formats, we will not, because it is a problem of the player, the HD and Full HD videos run on the qHD screen almost makes sense.

But with YouTube, things are bad. Moreover, the application crashes and often unstable, so more and the picture can be played with noise, as shown in the screenshot above.

Sometimes, one can observe the following picture: very cheap model is equipped with a very good audio amplifier, which delivers high-quality audio path, not inferior to more expensive and advanced models.

But then a miracle happened – the output level was only -15 dB, and the sound quality is not particularly commended for that.

CALL speaker was quite loud, but the sound quality it is different. The earpiece is quiet and muffled, but audible at maximum volume overload. The power of the vibrating alert is average.

Mpie M10 is able to work in networks of Wi-Fi protocols b / g / n. Only supported by a range of 2.4 GHz. There were doubts whether to continue to talk in detail about this “miracle”, but it turns out there is to tell.

Not only that, speed is very low, so more and stable reception is very “shaky.” It is necessary to quickly change position relative to the source signal, as the connection is completely lost. Adversely affect signal reception and heating devices.

A similar situation arises when transferring files via LAN-network.

In the worst traditions of MediaTek GPS-receiver without the aid of the internet does not work well. For 15 minutes, he was not able to “catch” for the few satellites that were found.

Mpie M10 is available in two versions: 16 and 32 GB. In this case, a second modification of the microscope hit.

At first glance, we face two sections of 16 GB each, but experienced users will notice right away that this size of partitions looks, to put it mildly, strange.

As a rule, if done two sections, then the system is left a small amount of fast flash memory, and a volume for storage – a lot slower. The savings are obvious. And in our case it is not clear why such a partition was conceived at all. In fact, the true size of the partitions as follows:

As you could already guess, the speed of the “treasures” small.

It supports connection to a PC via the following protocols: USB, MTP and PTP. The data rate on the smartphone – 6.4 MB / s data transfer rate from the unit – ~ 11 MB / s. 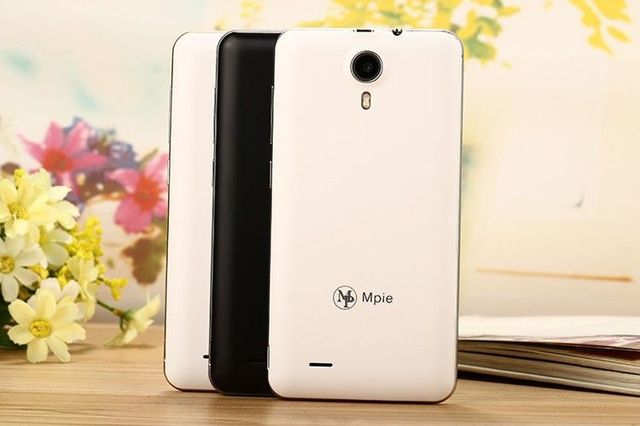 Mpie M10 comes with a battery capacity of 2800 mAh. At least, so says the manufacturer. With testing level of autonomy arose a lot of problems. None of the authoritative benchmarks have not been able to test the autonomous character of the review. For example, given that the GFX Benchmark and GeekBench 3:

As already mentioned, AnTuTu Tester is not established at all, and PC Mark unexpectedly quits. One could, of course, to tinker and to flash a smartphone, but neither the desire nor make much sense in this was not.

By the way, in order to err, I measured the time the benchmark GeekBench, and the result of my measurements made 5 hours and 13 minutes.

The next problem lay in the battery itself – assuming that because the voltage charge indicator gave the information is not always believable.

That smart phone has almost no self-discharge, it is literally 5 minutes discharged by almost a third. The graph shows a sharp turn off the unit when the level of charge more than 60%, so draw conclusions about power consumption based on the data of the sensor I will not.

In general, adequate autonomy, but the listed capacity in 2800 mAh battery on my sensations clearly falls short.

Mpie M10: Instead of conclusion

So we figured out how brazen and unscrupulous can deceive buyers. Smartphone Mpie M10 does not meet the stated specifications, ranging from models of SoC and finishing thickness of the shell.

And we are playing here “on a grand scale”: if you embellish RAM, then eight times, if we increase the amount of internal storage, it is also eight times, and the number of cores decided to multiply by four. Well, we reduce the technical specifications of the real.

Taking into account the true characteristics of the model, you can say with certainty that the price is obviously overestimated. For the same money, you can take the device from famous brands, such as, LG L60, Sony Xperia E1 or Samsung Galaxy Ace 4 Neo.

It is necessary to reiterate the inexperienced reader that is to be wary of buying sophisticated electronic gadgets through foreign services like AliExpress or PandaWill. Giving preference to a little-known brand, you will not get a better price / performance ratio, because the mobile device market nizkomarzhinalen, and if some manufacturer puts a price lower than its competitors under identical technical specifications, to be sure – on something he had saved. On the mobile market has long gone are the days when buyers come to spread to 50% of the price “for the brand.”

At the moment, even the largest producers are trying to save on everything: look for cheap package flagship Sony Xperia or the lack of quality in stereo original “musical” flagship HTC, the phasing out of the memory card in the flagship model of Samsung (an attempt to somehow make money on the more expensive versions), as well as rapidly leaving the past IR ports and radios (FM / AM). In this situation, the slightest “greed” can be deadly for producers, on which only recently Sony just “dog did not eat.”

But back to our “sheep.” Even if we ignore the fact of fraud and price, then we suddenly a bad machine. This is the first smart phone, one of those that I have met, which is bad in all respects. If it was advisable to list the pros and cons, as we normally do, it would have to scroll through a page for quite some time. So just remember, do not buy this “miracle”, even very cheap. Well, unless you are the director of the Kunstkammer.