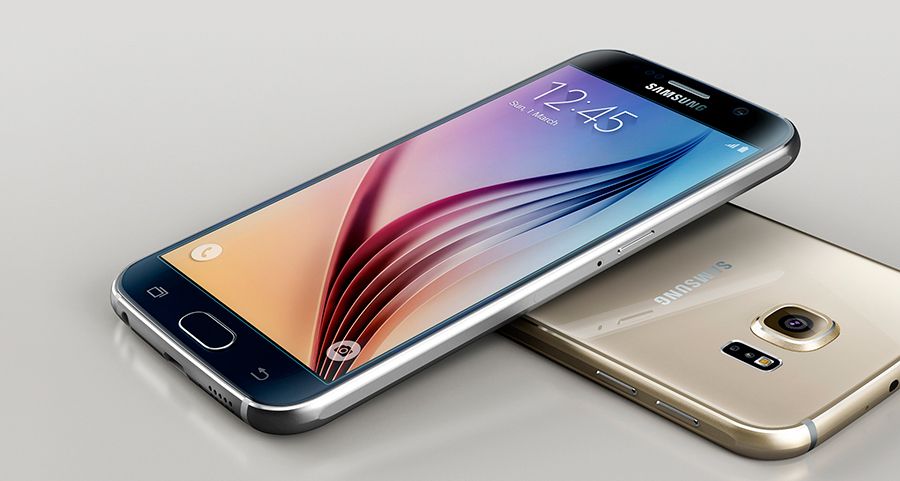 The new flagship of Samsung traditionally characterized by its high adaptability. This year, major changes were made design – Galaxy S6 got the body of glass Gorilla Glass 4 and metal, as well as the screen – Quad HD. Complementing the same picture, as always, a wide range of various modules and sensors plus easy software. And all this is crowned by a price tag of $ 850. For what we pay the money and get it in the end, later in the review.

Over the exterior Galaxy S6 designers did their best: smart glass case looks much more elegant and more expensive than their predecessors of pretty plastic.

The very “premium feeling» S6 also adds unpainted metal frame on the perimeter. It is, incidentally, the most obvious, but at the same time, perhaps, the only element that hints at a superficial resemblance to the Galaxy S6 Apple iPhone 6, and then only when you look at the lower end. Here S6 similar to the “apple” device to equip a 3.5 mm audio port microUSB, output and microphone grille multimedia speaker. Of additional elements – two narrow plastic injection, concealing antennas.

The upper end of “Korean” takes Infrared and microphone noise cancellation. The other mechanical controls are located on the lateral side of the device: Right – the power button and a slot for nano SIM-card on the left – the volume key sound.

All functional elements are soundly and carefully move from side buttons clear, with a noticeable click. The only negative in this respect, as it seemed to me almost a tall arrangement of the volume keys, and of the absence of even minimal protection from entering the body of water and dust. 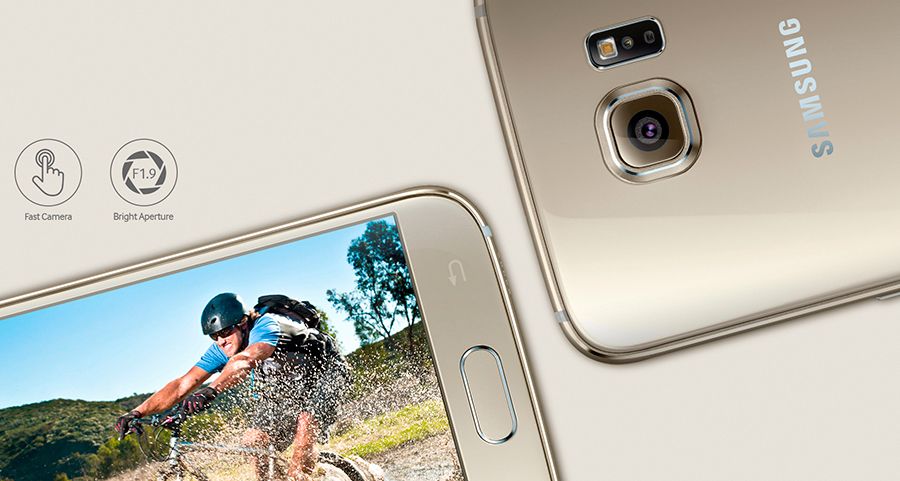 Returning to the design, gently rounded ends undoubtedly added convenience, the use of S6, although diagonal 5.1 inch is still not very comfortable for one-handed operation, especially the “on the go”. Especially, Gorilla Glass 4, which are front and back – though the material is durable, but slippery, so the protective cover does not hurt to calm nerves.

The next thing that caught my attention to the S6 – color solution. Housing smartphone is painted in beautiful “deep” shade of black, which, however, in practice it is more like a dark blue. Looks charming, especially on a sunny day when the heel begins to sparkle thanks to its glossy texture.Of the other available colors: white, gold and blue.

On a glass back panel S6, of course, are clearly visible fingerprints, and even here striking logo of the manufacturer, LED-flash sensor heart rhythm and square significantly above the surface of the lens, as a consequence of powerful optics in the body thickness of only 6.8 mm.

On the front panel above the screen with thin side frames can see a metal grate earpiece eye 5MP camera, light sensor / proximity and LED-indicator, and underneath two touch buttons illuminated when switched on, and the mechanical button “Home”. In the last traditionally built fingerprint scanner – the recognition accuracy is not satisfactory.

Well, among other things, a smartphone perfectly assembled – no scratches and no backlash, which is why it is very pleasant to use.

In Galaxy S6 uses 5.1-inch Super AMOLED-display with a resolution of 2560? 1440 pixels, pixel density per inch – 577. He is good in all respects: the maximum viewing angles, clear and smooth images, excellent portrayal of small fonts and details, the colors are bright and vibrant, well, color rendition traditionally depends on the selected screen mode.

In bright sunlight the display S6 behaves very well thanks to improved lighting, which, by the way, here is regulated manually and automatically. Multi-touch support up to 10 touches. 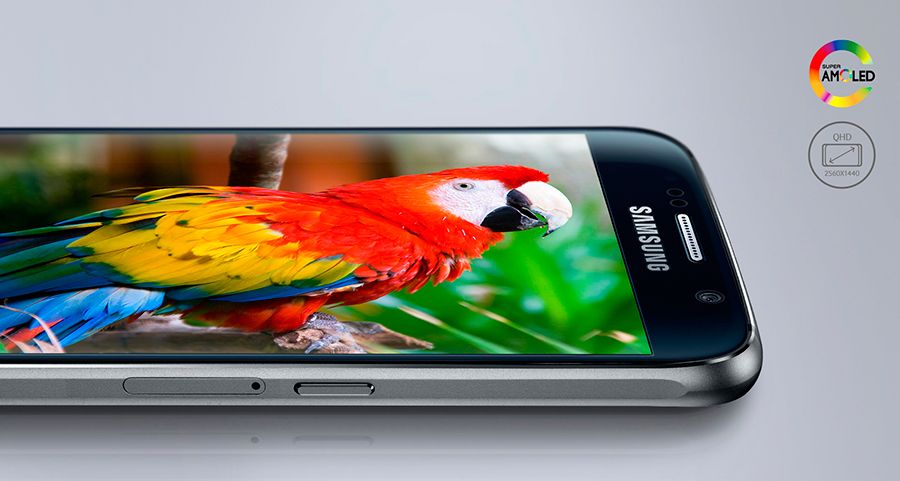 The screen has a oleophobic coating quality – good finger slides and prints are easily erased.

And, as mentioned earlier, from scratches and cracks it protects the glass Gorilla Glass 4, which, as claimed by manufacturers, in contrast to their predecessors and competitors able to withstand a drop down screen smartphone. However, I am in such a way the strength of the glass has not reviewed, and you do not recommend it.

With regard to the amount of internal memory, our test sample S6 is available 32 GB, but will be available for sale yet, and 64-gigabyte version. 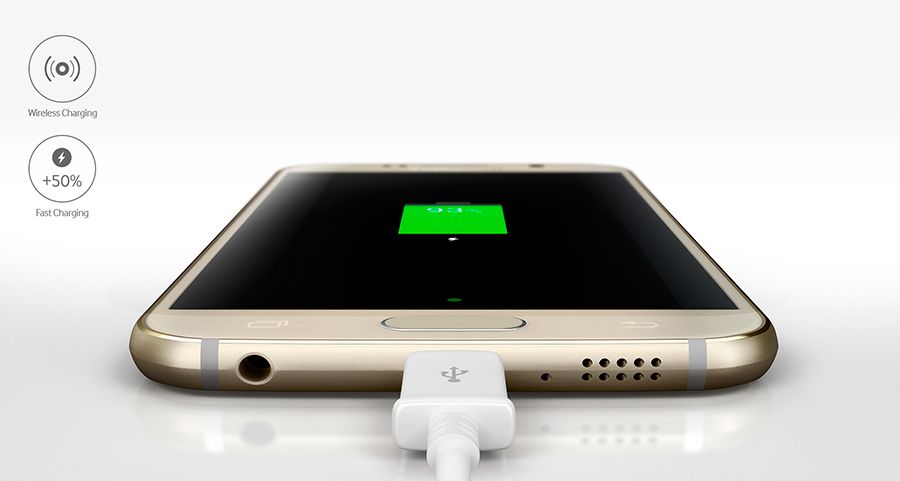 The memory card slot is not provided, but it supports external flash drive into the USB port mode OTG.

This “iron” allows the smartphone to run absolutely everything at maximum graphics settings.Galaxy S6 «flies” in games and applications, plays 4K-video. 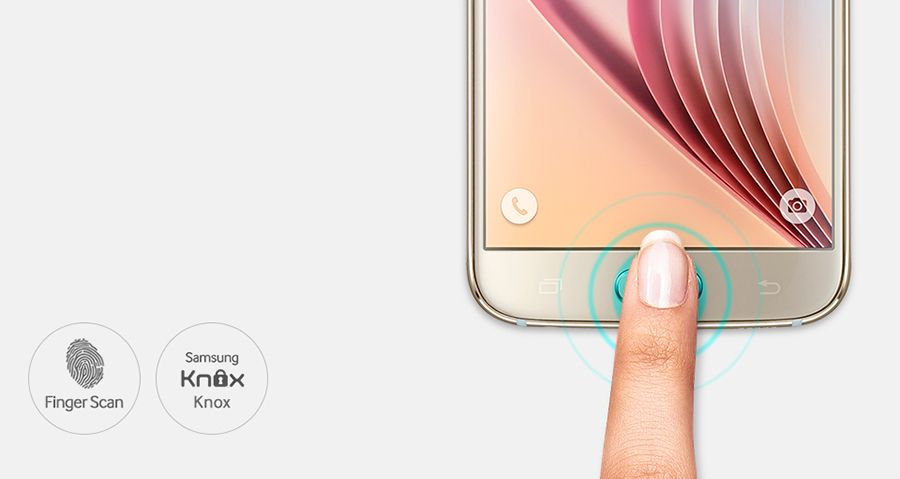 Through NFC-chip implemented as a system of mobile payments Samsung Pay – analogue Apple Pay. She, by the way, unlike the service “apple” producer support in addition to NFC technology also MST, which allows you to make payments in retail outlets equipped with conventional terminals for credit cards. However, available Samsung Pay, will be only in the summer and so far only in the US.

In turn, boot from the Samsung Apps application Drive Link, the user can through the Galaxy S6 MirrorLink protocol to connect your smartphone to the car’s infotainment system or the head of the car.

Set of various sensors and sensor S6 got from its predecessor S5. In addition to standard: accelerometer, gyroscope, proximity sensor, compass, barometer, a magnetic field sensor (compass), light sensor, the sensor has a sign, a fingerprint scanner, the sensors measure heart rate and blood sugar levels.

High performance and QHD-resolution display affected the autonomous operation of the gadget when performing intensive tasks. With an active Wi-Fi-module and the average brightness of the backlight – Full HD-video is played for 7 hours and 8 Asphalt can be played for 4. But at a minimum level backlight charge spent quite humanely – hour plus photo and video viewing as much video to YouTube «eats” in the amount of 30% of the charge.

There are power-saving modes, including extreme, using the theme of the home screen in simplified grayscale, has built-in wireless charging Qi / PMA and the possibility of rapid recharging.In the case of the latter the manufacturer promises 4:00 S6 battery life after only 10 minutes he spent in the power adapter. In practice, for a period of time I have been charged S6 14%, and only the drain here depends directly on device usage scenarios. 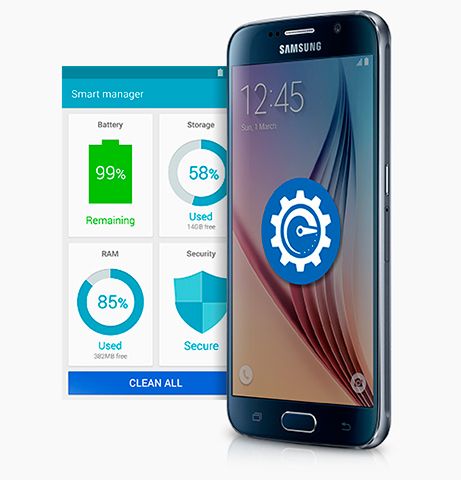 Photomodule supplemented flash, its launch as possible by touching the icons on the screen, and double-clicking the button «Home».

You can control the camera key on the virtual display, voice and volume rocker. Among the available user settings and modes note slow motion, fast motion, panning 360 degrees, “selective focus” – the ability to change the focus of the picture after the shooting, as well as virtual shooting – Capturing the object from all sides. There is also a mode of continuous tracking of moving objects – if you set the focus to the desired object, S6 will be monitored and automatically focus the camera.

In Pro mode can be traditionally the ISO, white balance, shutter speed, exposure and more.

16Mp camera used in the matrix to deliver crisp detailed images, even in low light and can shoot video in 4K Ultra HD.

Self-portraits, too good due to the wide 5MP camera capable of recording QHD-video.

Available on the shooting gesture, voice and finger to heart rate monitor on the rear panel. On the basis of their practice, I would say the latter method is most convenient and less fraught with accidental slipping from the hands of the smartphone

Galaxy S6 sounds great on headphones and a loud speaker multimedia. The sound is clear and full of the whole range of frequencies, playing without distortion even at maximum volume.

To play music uses a proprietary player with plenty of options. In addition, an en sound processing technology company called SoundAlive + with EQ, where possibility of applying effects, adjusting the frequency in the square, as well as management of stripes with increased bass and treble. And the FM-radio, unfortunately, traditionally top smartphone Samsung is not.

Had no claims to the quality of the earpiece – for smartphone communicate comfortably in absolutely any environment.

In addition to the traditional drop-down curtain set shortcuts for quick inclusion of certain functions, there is also a button start search client S Finder shortcut key and connect to other devices.

Among the preinstalled proprietary applications familiar from previous models of smart phones manufacturer S Planner, S Health, S Voice, Smart Manager and Smart Remote to control home appliances via the infrared port. In addition, the presence of a large number of tools from Google and three from Microsoft: One Drive, Skype and One Note.

In the settings provides the function of gesture control and easy screen mode, and thanks to the support of multi-window mode on the flagship Samsung can, for example, while watching videos and surfing the web.

Samsung Galaxy S6 get not only reliable and powerful part of the assembly in technical terms, but also one of the most beautiful flagships on the market. In combination with glass and metal is so thin body looks really gorgeous though and we had to sacrifice a memory card slot, and a removable battery.

Enthusiasts high-quality photos and video Galaxy S6 has excellent in its features 16Mp camera, in turn, music lovers will not be disappointed with a clean sound. And certainly everyone will like the large display ultra-high resolution.

In our opinion, the only stumbling block when buying S6 can be only its cost – from $ 850. Such amount will be willing to pay at all. However, the main competitors in the face of iPhone 6 and HTC M9 are not cheaper, with the first inferior “galactic six” In my opinion, the capabilities of the camera, and the second the lack of a fingerprint scanner and a lower resolution display.