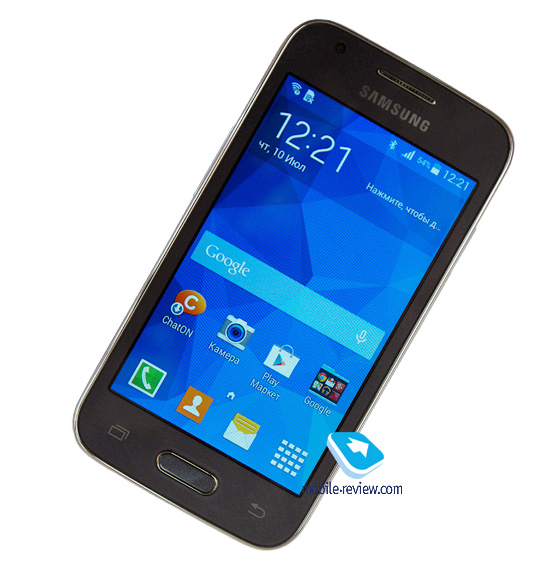 At the dawn of the emergence of touchscreen phones in the Samsung see them as his ticket to the first league, that is, it was an opportunity to overtake Nokia and other companies to make a dash up.

In fact, the first phone company, designed for the mass market, was Samsung Corby, which together with Samsung Star has created a win-win duo that is unparalleled in terms of price / quality. Only later they were joined by such a device as Ace, it has also become very popular. All this happened at a time when the market share of Samsung is still much inferior to Nokia and the company has just made its way to the first place, and the flagship Galaxy line did not exist. Then there was a sharp jump in sales in the upper price segment, the company was able to build quality equipment, and it happened at the expense of profits, which was derived from low-cost devices. 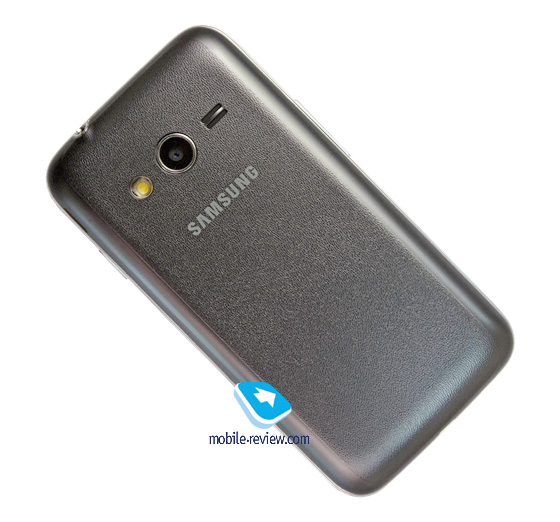 In 2014, the situation is such that no competitive Samsung models in the budget and mid-price segments, the company has played in too flagships. Whole scattering budget leaves no new products because of the needs of the market and not on the actual situation, but simply because it is opened in the company. This model, which hang in a vacuum. It is not clear for whom they were created, why they came, and understand only one thing that you can buy such a device in a drugged stupor, when you do not compare prices and specifications at all, but take what you offer. In my opinion, in that ignoring the mass market, where Samsung and raised in the past, lies the main problem today. The company is still time to change the situation and turn it is possible that the range will be created in 2015 taking into account comments from the market and actual sales. This should be emphasized, otherwise nothing will change, and then drop in the share of the smartphone market will continue.

This machine does not have any clear position – it simply created as a continuation of the previous Ace. No calculations, no research – a model with an inadequate value, calculated on a random sale. However, let’s look closely at what kind of machine and what disadvantages it has to realize, because of what the Samsung problems began. If you for some reason, suddenly decided to consider this product to purchase, direct text discourage you from it – you just throw your money.

Size of the device – 121.4h62.9h10.8 mm, weight – 124 grams. Small device that stout for its size and is fairly small by modern standards, the battery (1500 mAh). The small width and thickness make it noticeable not too comfortable in the hand.

Layout on the body also traditional: the upper end – 3.5 mm headphone jack, lower – the microphone and microUSB-socket.On the left side – the volume rocker on the right – on / off button.

Build quality is excellent, there are no claims can not be. Inside the body of the rear cover hides the memory card slot under the battery – a slot for full-size SIM-cards.

The screen has a diagonal of 4 inches, which by modern standards inherent budget models, with screen resolution – 480×800 pixels (TFT, 233 dots per inch). The screen quality is poor, the colors are shifted to the blue, the picture fades in the sun.This is the screen that we saw in the line Ace a few years ago. Feeling that nothing over the years has not changed – the current product, this screen looks like a very economical solution, which does not changed. No light sensor, backlight is adjusted manually.

The keyboard on this screen is not very comfortable, affect the size and the total tardiness of the device.

The phone has 512 MB of RAM, which by modern standards, quite a bit, but we have examples of platform MediaTek, which aids in the budget runs quite quickly and with as much RAM. But Ace 4 is not so good as the machine stands platform from Broadcom, as well as in the previous model (LTE version differs Ace 4 1 GB of RAM and the other platform, so it’s a slightly different apparatus – to compare them head-impossible) .

The performance of this solution is low – even the Android interface is very slow so braking unit I had for many years (dual-core processor, the maximum clock frequency of 1 GHz, but it is Broadcom!). This is not just slow, it’s very, very slowly, as if in special effects, which show how the pop-up window, and draw each frame by frame motion, I showed it in the video for the review, look at it.

In the synthetic tests the device also does not possess some results, you can see them below. 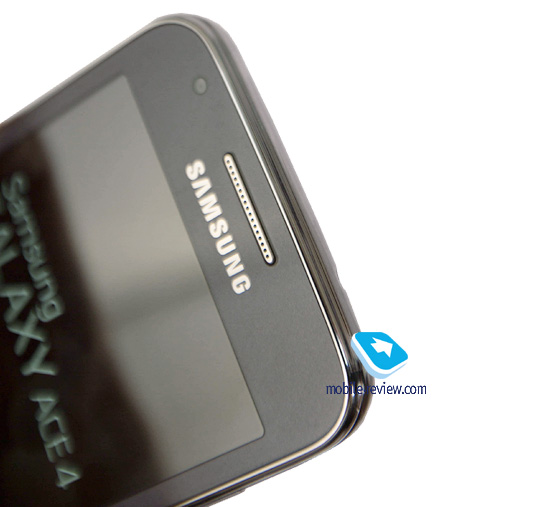 4GB of internal memory, 1.8 GB of them employed preinstalled applications and system, you can install a memory card up to 32GB, with read / write speed is low enough for them, that is not a problem for the camera or recording video, but makes watching movies difficult (on the other hand, look at this movie screen – a small pleasure).

Especially I want to emphasize that we can safely forget about running not only “heavy” toys, but also quite ordinary things – slow, difficult and often does not work. This model simply can not be compared even with low cost devices from other companies, it comes from some primeval past.

Module 5 megapixels, very slow, since the chipset does not quickly process images, often because of this picture smeared – Press and wait until the picture is taken. Record video in HD-resolution. See examples of pictures and videos below for a budget machine all expected. LED flash can be used as a flashlight, as such, it is much more interesting than its main purpose.

The first thing that surprises is the availability of NFC in this unit – practical use zero, but for some reason he is present here. Why? Answer this question, I have not. Otherwise typical – Wi-Fi b / g / n, support for Wi-Fi Direct, Bluetooth 4.0 without the presence of LE, but with all the profiles. Version of USB 2.0, which is a bit unusual, but is understandable in the budget segment.

The device is based on Android 4.4.2, which is unusual for the budget segment. But suppose that he will receive any updates, you can not – I think that this version will remain. The phone has a built-in FM-radio, this is the only possible difference from other models. 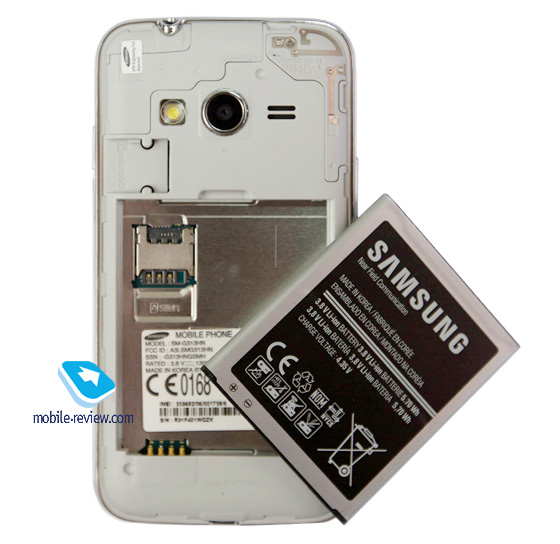 I will not talk about the quality of communication, as it is not very important aspect of this model. I doubt that she may have customers who really enjoy this machine every day. I this week with the phone wanted only one thing – to break it on any wall or asphalt. It’s not just brake, is a very large brake. Cheap screen, lagging the market for several generations, inarticulate processor from the manufacturer, who retired from this market, and the latest version of Android. Plus small amounts of RAM. All together, creates a kind of monster that not even a conventionally comfortable. This unit can give the enemy with a curse – use them for life, agonized.

But as you know, there is always such an option as the price, it can change everything overnight. I do not know how to change the platform and the like brakes, since they are not observed in the devices cost 1500 – 2000 rubles, but that price may somehow affect the perception and make just a lot of roughness.

No, wait, before you go to the tastiest, focus on the price of Ace 3, which comes to replace this unit. In the previous model, all similar, only 1 GB of RAM, that is, there is even deterioration. So, at the moment Ace 3 sold in Russia at a price of 7990 rubles! More precisely, not for sale, as represented in those retailers that focuses not on sale, but rather on the presentation of the goods, the effectiveness of their own sales a little worried.

Now, pay attention, drumroll, the cost for Europe named Ace 4 equal 219 euros. A simple analogy with other models will give us a price for Russian rubles by 9990, and even higher. Do you have a word? I personally do not. This is not simply a disgrace, this detachment from reality, which can be called complete, absolute and unconditional.

Models with similar characteristics are 3-4 thousand rubles, but they do not have the word Samsung. Devices 8-10 thousand rubles are fundamentally in a different class, their market set. Who are going to compete in the Samsung releasing Ace 4, not clear to me. This is a fabulous smartphone that simply can not exist at this price, but because here he is in front of me.I hope that you will not be so mad to see the side of the device. It perfectly demonstrates why Samsung sales in the budget segment flying down, but buying an example of this just not worth it. Spend your money with more plainly and meaning.