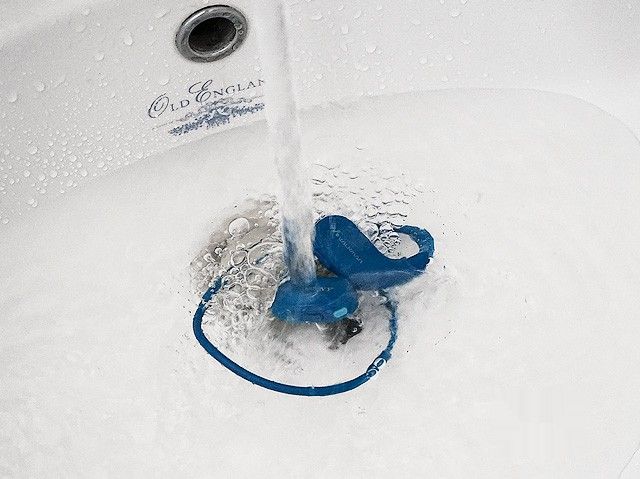 Sony NW-WS413 does not have Bluetooth and remote control included, but there is a microphone, lets you hear ambient sounds, plus protection from salt water that iPods W Series meets for the first time …

The Sony continue to develop a series of athletic players the W, I hasten to note that the current line is a low-end model. In WS613 has Bluetooth for connection to smartphones, remote control worn on the finger during the voyage – and then you have to choose, or Bluetooth, or to the possibility of use in salt water, is the main feature NW-WS413 / WS414. Beforehand I must say that I have at hand there was no sea or ocean, swim, I tried to WorldClass close to home, so I’m sorry in advance. Hopefully, there will be users of the player, try it out in combat conditions – tell us about your impressions.

The player Sony NW-WS413 is available in three colors, this emerald, ivory and black, the colors are very beautiful, and it is gratifying that at Sony have moved away from the usual sports and aggressive colors. In fact, why? One player that was on the test, looks very cool, it can be used in the gym, and on public transport, and during walks. That is, nothing in this thing does not issue a part of sports equipment – I think it’s right. 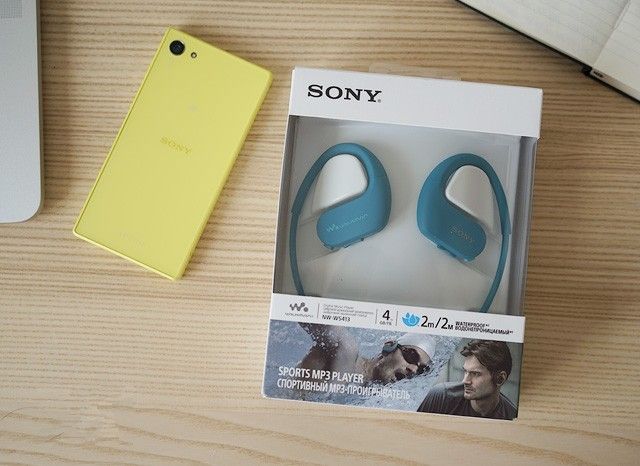 Structurally, everything is like the other players, the W Series, two small cups, the headband, the headphones are inserted deeply into the ear, pick up the same nozzle easily, they are distinguished by color. Jumper flexible, but too much I do not advise her to knead. Charging occurs in the same manner as before, it is necessary to insert one earphone in the cradle with contacts connected to the computer. All the buttons are large, so you can find them easily on the right – the power button, rewind (fast too there), Play / Pause, left – the volume control, playback mode selection is Shuffle, Repeat Track, and normal mode. Button unmarked activates a very interesting feature, built-in microphone in the headphones for operation mode “surround sound” – handy if you’re running down the street or riding a bicycle. The headphones perfectly audible surrounding noises, besides, you can select one of three modes – depending on the surround mode will be heard stronger or weaker. The W series is such a feature is used for the first time.

The player Sony NW-WS413 is protected from the environment in accordance with standard IP65 / IP68, in fact, you can not be afraid of anything – especially water, dust, dirt. But there is an important point, included two types of nozzles, one normal, the other to the protection of the water – it is very important not to confuse them, because the latter is a kind of film that does not allow water to penetrate into the player. It is stated that the music can be listened to, even under the water, I tried it in the pool – a strange, of course, the occupation, but someone will like. Much more interesting to just float with the music, know yourself, usually swimming is not much fun in the pool, well, at least to listen to your favorite tracks.
Especially I want to note here that – sports headphones more likely to die not from water and sweat, it is a different substance and can adversely affect a variety of materials. It will be interesting to look at the reviews of people, whether the player will work normally after long workouts – how to behave packing, plastic on the inside. I think if there is protection from salt water, and the sweat player also protect. 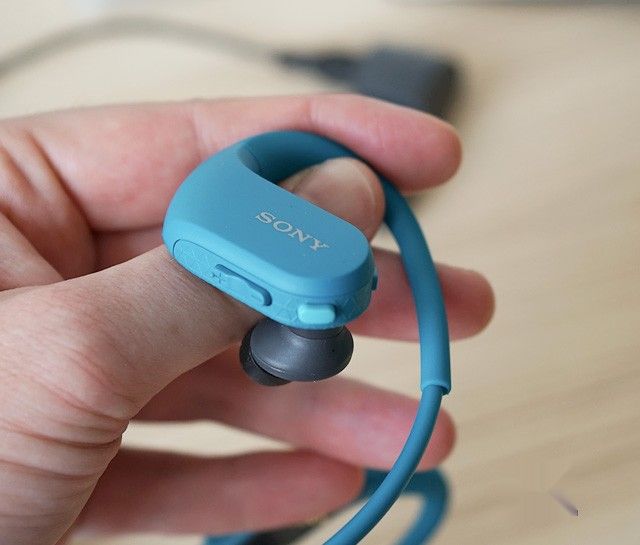 Available in two player models with memory 4 and 8 GB, the Sony stubbornly do not want to do sports players with 32 or 64 GB of memory – though here, imagine walking people watching and three times a week for an hour, yet can run on weekends. How quickly bored him 4GB of music? I think, fairly quickly. Actually, the Sony conservative not only on memory, maybe it’s all my silly childish dreams, but is not it time in the series W to add support for FLAC? Here, because the only supported MP3, WMA, AAC-LC and L-PCM – a strange set for 2016 and for the company, promoting high-resolution audio.

As I understand it, in memory of the tracks are reproduced as follows: first the individual compositions, if you get into the folder, then play the tracks from there – when the latter comes to an end, you can go to the next folder, such as repeat all the tracks in a folder can not be (only individual tracks can be repeated ).

Claimed battery life is 12 hours at nearly full volume (three-quarters), charging from your computer takes only half an hour. There are fast charging, when, after three minutes, connect the player can run for hours.

For the W-Series is a typical result – in the gym, you can connect the player to an external battery fast charge and pre-workout, it is a plus. 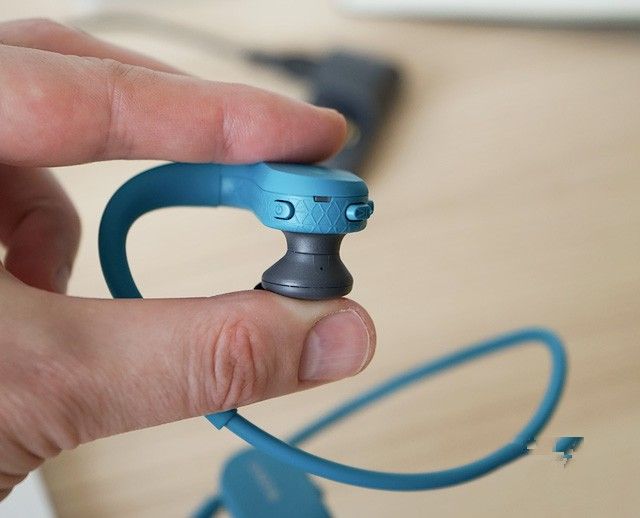 The characteristics specified for dynamic normalizer long searched how to disable or enable, so nothing found. It seems to be working by default. As for the supported formats I wrote above, the Sony offers users the easiest and most simple way to use, quickly charged into the memory some music selection, press Play and started listening. For computers based on Windows, you can download the software Media Go the Sony production, in theory, it can be used to create playlists – and the player will understand them. In the case of OS X have probably only use the Finder, and all.

The sound quality is good for a sports player, branded Sony settings are present here – a sort of pleasant to the ear canvas, familiar to anyone who has enjoyed a century Walkman. What is electronic music that jazz that pop rap sound good, the volume is huge margin. Remember, you can not adjust anything, I advise you only use MP3 with good quality. Some artifacts and problems noticed during playback. Naturally, this model is largely for the classics, and for more aggressive music suitable for practicing, so here vypyachena bass, but without excessive bounce and molestation.

In order to exercise the player fits perfectly. And much better bundle phone, wireless headset, you are not a distraction is nothing you can not twitch, if someone calls or writes. No extra cables, bow at the neck does not count – to catch it very, very hard. In general, leave the equipment in a safe, take the player and go to the gym. Do not worry if an hour will be gone from sight of all mankind. 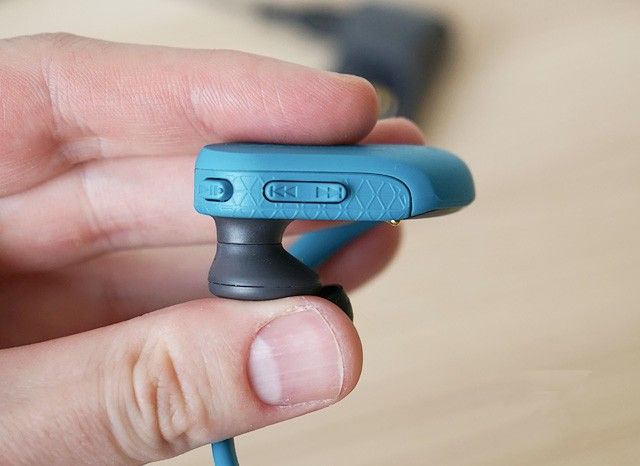 In the retail player is worth 8990 rubles, expensive for an ordinary player, it is quite normal for the unique things that can withstand submersion under water or swim in the sea. The model went on sale just as necessary now, many are preparing for the holidays, so I recommend to pay attention, if you or your family members all try to swim as the Sony NW-WS413 much as possible, will not be bored.

From “hotelok” I note the following, we would like to have one set of nozzles on all occasions, even though I did not notice that the quality varied greatly. It is time to add FLAC support for the W series of players, it’s time to use 32 GB of memory, 4.8 GB is really not enough nowadays. Well, Bluetooth support, it seems to me, can be in all the series players, not only in the older models.

P.S. About the built-in microphones – as I understand it, this is a new trend in audio equipment manufacturers. Coming soon review JBL Everest Elite, where it paid a lot of attention, see the microphones at Sony – let’s see, who else will do something similar.