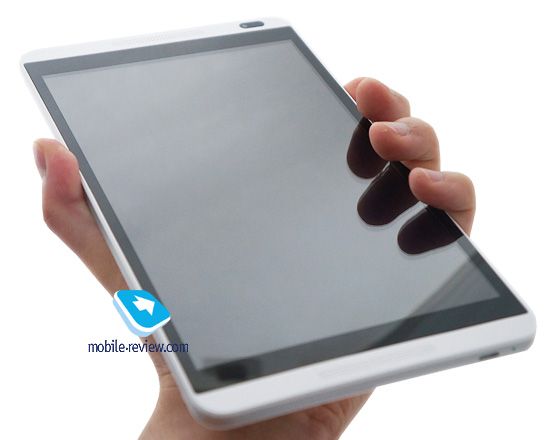 Our editors have already visited Tablets Huawei MediaPad 10 Link + with a 10-inch diagonal screen and a more advanced and premium MediaPad X1 with a 7-inch diagonal screen. The device, which we observe today – is an intermediate solution: unlike X1 and Link +, diagonal display MediaPad M1 is 8 inches, they are in different weight classes, chamber MediaPad M1 to 5 megapixel (in X1 – 13 MP, while the Link – 3.2 MP). There are other minor differences, but the same chipset devices, in-house development of Huawei – HiSilicon Balong V9R1.

To immediately determine the prices, it should be said that the most expensive – it MediaPad X1. Now it can be found in 16 000, slightly cheaper – MediaPad 10 link +, the official website is easy to buy up to 14 000 rubles. MediaPad M1 8.0 tablet is currently available for the price of 12 000 rubles. All versions of the devices are able to work with the networks of the fourth generation. 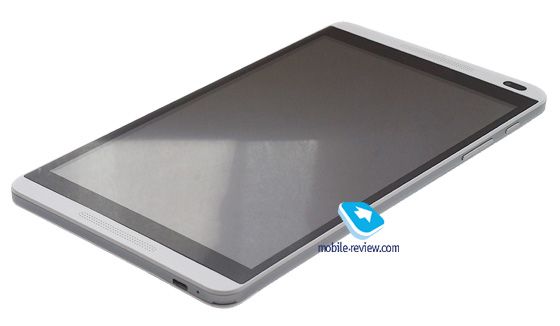 Appearance MediaPad M1 like a smartphone HTC One M7. Similarly situated speakers, front camera, much decorated two inserts on top and bottom, the hull shape is similar. In general, as always – nothing new or interesting, though quite pretty.

The device has the following dimensions – 214h121h7,9 mm, weighs 329 grams, that is, the typical size and weight for 8-inch device. The only thing that pleases, so that thickness. Right and left frames allow comfortably hold MediaPad M1 (upright) with one hand. The small width of the device allows even embrace the body with his hand.

The screen is protected by glass. Unfortunately, what kind of material is used, the manufacturer does not specify. For a month the active use of the display there is not a single scratch. Probably has an oleophobic coating as fingerprints on the surface of virtually remain, and those that appear are easily erased. Bad finger glides across the screen, I think it is a disadvantage.

Of semi-gloss white plastic made slim bezel around the perimeter of the housing and the area where the speakers. Border – semigloss plastic, painted silver. Of the back cover is made of metal. Ironically, during the test does not appear on the surface scratches or scuffs.Top and bottom – plastic inserts in white. During “yuzanya” most likely, they will gradually wear off, especially on the sides.

The device has only one removable element – a small socket, which allows access to the connectors microSIM and microSD.

Her attachment made several unsuccessful, because after the third or fourth time of extraction sockets, it could turn to the right micro-USB. 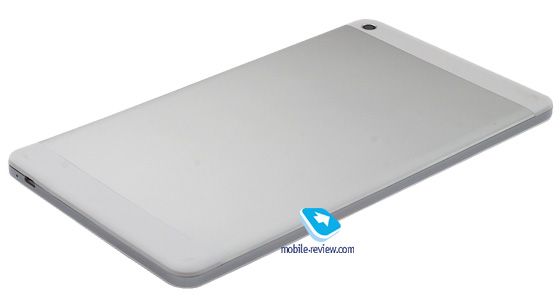 On the front panel at the top right – light sensors and proximity, front camera and indicator for missed events. Left – handsfree speakerphone and voice speaker, though not sure it there are two. Voice speaker has a low volume, excellent intelligibility, the interlocutor can hear clearly. Bottom – another handsfree speaker.

At the bottom there are micro-USB and microphone. Due to the remoteness of the microphone from the mouth (still 7-8 cm) you can hear quiet, have to speak louder. In my opinion, an electroacoustic device cost to place near the bottom of the speaker.

A second microphone for noise reduction and a 3.5 mm jack are located on the upper end.

Right – the power button and the button-volume rocker (made probably made of plastic).Convenient to use.

Screen Resolution – 1280×800 pixels, density – 188 pixels per inch. Pixelation is not evident, but the image can not be called dramatic. Matrix is ​​made by technology IPS, OGS missing. The viewing angles of 160 degrees, the picture at an angle of the display becomes light yellow.Colour reproduction is slightly broken, as a little white out in warm shades. Saturation seemed to me low, even more bleak.

The brightness is the average of the matrix, it is only enough for comfortable reading information indoors or outdoors on a cloudy day.

In the settings there are two options: “Auto Brightness” and “smart lights”. If the first clear, then the second or on impact. Still have color temperature of the screen, but it is too primitive, and from my point of view, there is no sense of it: the colors are either too cold, close to the blue or warm. 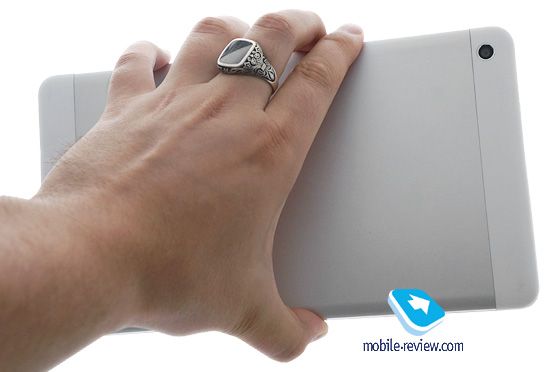 The tablet is equipped with a non-removable lithium-polymer (Li-Pol) battery capacity of 4800 mAh. The manufacturer claims that the battery is fully charged Huawei should be enough for 500 hours of standby time, up to 8 hours of video playback and surfing the Internet.

When playing HD-video at full brightness and volume unit lasted 5.5 hours. But toys will put the battery in just 2.5 hours (maximum brightness), at a constant data transmission (e-mail, Twitter, Skype) battery runs for 4 hours. In general, something with optimization processes clearly nahimichili.

On average, the battery was discharged in 8 hours at the next tablet mode: automatic brightness, 20-25 minutes of voice communication, 4G-internet about an hour and the same Wi-Fi, watching hour and a half movie and half an hour photographing.

The USB device is charging for a long time, but at least it is charging.

In the presence of a complete “gentleman” set: Bluetooth version 4.0, Wi-Fi standard a / b / g / n (2.4 / 5GHz) with the possibility of the “distribution” of the Internet (access point «Wi-Fi Hotspot»). USB 2.0 with a “yusb host.” For additional accessories, such as a hub or keyboard, sell special USB-adapter. Complete it is not.

Working with GPS does not cause any issues. Sensitivity GPS / GLONASS receiver is very high: in a room easily at the “cold” mode for 10 seconds is up to 4-6 satellites in open space – more than 13 in about the same time. When testing the signal is not lost.

The device 1 GB of RAM and free an average of about 300 MB. To install the software, upload videos, music and so on allocated 8GB (in fact, about 4.5). By the way, the official site says that should be 16 GB Flash!

There is a slot for the installation of a microSD memory card up to 32GB. 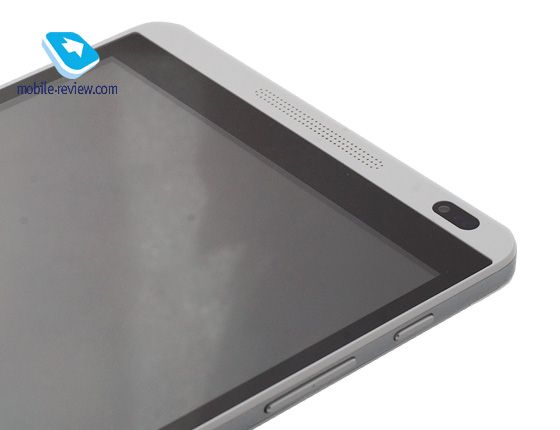 Quality photos with the main camera, I was completely satisfied, of course, given that it’s still a tablet. Pretty smart and precise focus, good detail, a bit of noise in normal lighting, the correct white balance. In short, many smart phones, even at this price so do not know how “to take a picture.”

Video unit writes much worse 720p resolution at 20 frames per second. Sometimes the picture is retarded. There is an electronic image stabilizer, and I must say, it is very efficient.

“Frontalka” creates pictures in 0.9 megapixels, the quality is quite come. Rollers are recorded in the resolution of 1280×720 pixels at 15 frames per second.

Interface usual: top left – camera mode switch to the front camera, the settings; bottom right – switch to video recording, the entrance to the gallery. Below – screenshots.

This tablet uses the chip of its own production HiSilicon Balong V9R1 (Kirin 910). Online little information about it, but the bottom line is that in V9R1 quad Cortex-A9 (28 nm), working with such a frequency of 1.6 GHz. As a graphics accelerator performs Mali-450 MP4.

Interface device often retarding, sometimes manifested mikrolagi. Unlike MediaPad 10 link +, which is worth the same chip, MediaPad M1 «digest» almost all the toys without any problems.

The unit does not get hot even under heavy CPU load.

Operating System – Google Android version 4.2.2. Shell – EmotionUI 2.0. It is almost one to one, as on the phones: A cute, functional enough. At the time of writing there were no updates.

Music player interface we have described, to return to the application will not. Volume of the stereo is very high (slightly lower than MediaPad 10 link +), the sound is clear and pleasant.Stereo effect is better heard at a distance of one meter, but in any case he felt.

Device Huawei MediaPad M1 8.0 LTE caused no particular emotion – a typical tablet with a small screen, two cameras and two speakers. Yes, there is an opportunity to talk to him on the phone, but I’m not sure that someone will do it: First, it is inconvenient, and secondly, and you can not hear, and you listen to the voice of the interlocutor.

If we take into account the 4G, then the competition is not enough:

Asus Fonepad ME372CL. It is worth a little more than 9000 rubles. 7-inch screen HD, two cameras, a chip from INTEL.

Setting aside the LTE, then you will be able to Yandex.Market find about 70 tablet models with the same parameters as MediaPad M1.