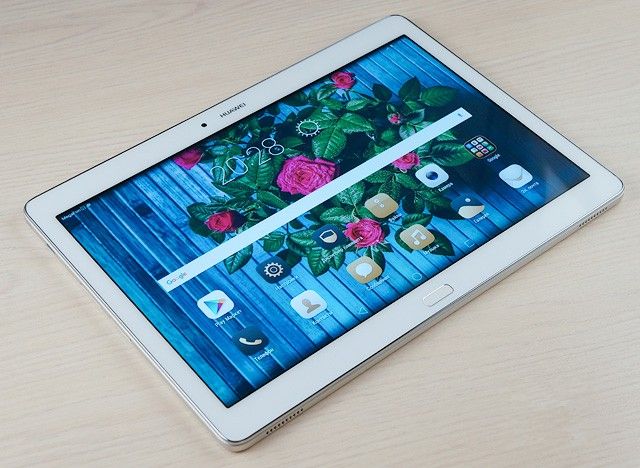 Additional feature of the tablet is the presence of two speakers for high frequencies and two speakers for low frequencies. The manufacturer has applied proprietary technology HARMAN, the leading company in the market of audio and infotainment systems.

The appearance of the tablet is quite a classic, without any fanciful design elements, we can say that the M2 looks calm. Hull shape is rectangular, aspect ratio – 16: 9, sloping corners, edges smooth.

“Appearance Huawei MediaPad M2 10.0 was designed with the expectation to make the shape of the device with a large screen visual” light “.

On the perimeter of the screen is a thin plastic edging, partially protects the display surface from damage. The front panel is covered with glass. The official sources, alas, does not say what kind of stuff, I think it is an analogue of Corning. Oleophobic coating is, it is sufficiently efficient, prints quickly erased, slides a finger across the display easily.

The side edges and virtually the entire back surface are made of aluminum. On top there is a plastic insert, arranged for her antenna for receiving and transmitting cellular data networks, Wi-Fi and Bluetooth. 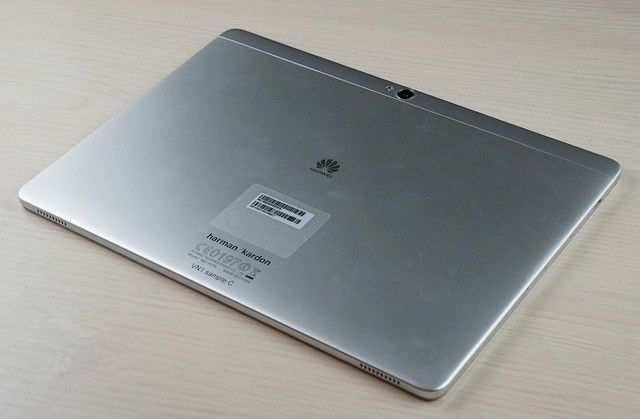 The front panel is located on top of the camera for the selfie or communicating via Skype. Below – a fingerprint scanner (10×15 mm, silver bezel) with recognition of 360 degrees (the device can store up to five different prints), acting as a touch button: long hold your finger on the scanner allows you to switch to the main desktop, swipe to the left makes it go back to one action back, and swipe to the right opens a running program management menu.

On the left side are: microUSB, two separate metal slots for microSIM and microSD memory card. On the right side – power button (blocking, activating the backlight) key and volume rocker. Convenient to use, have a clear course and a quiet thud “clicks.” On top is a microphone, left and right – speakers (as I understand it, they are responsible for the low frequencies), 3.5 mm jack. Bottom – Two more speakers, responsible for the mid and high frequencies. On the reverse side are the camera and flash with «HUAWEI» inscription logo and the inscription «harman / kardon».

This device uses a screen diagonal is 10 inches. The physical size – 216h136 mm beyond the top and bottom – 18 mm, left and right – of approximately 11 mm. There is anti-reflective coating. 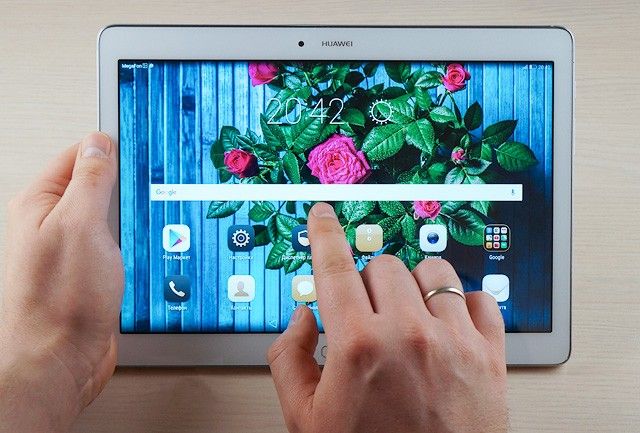 The yellow line on the graph of brightness – Evidence. You can see that we are exactly on the target curve, which means that for each value between 0 and 100 are optimally bright image.

A few words about the stylus. The fact that it only works with M2 10.0 screen, as used herein by WACOM technology. Digital pen recognizes 2048 degrees of depression and is made of a special material, which resembles the touch pen. The response time of only 25 ms and accuracy when drawing does not exceed 0.5 mm.

“In addition, MediaPad M2 10.0 to quickly and accurately recognize handwritten texts, drawn on the screen using the stylus. For example, if you want the tablet owner can write e-mails “by hand” and to carry out calculations in the calculator, without pressing the button, and drawing numbers and symbols directly on the display. By default, the tablet has a number of pre-installed applications that support work with the digital pen, and additional software and new graphics editors are always available for download from the Google Play store. ”

The device uses a non-removable lithium-ion battery capacity of 6600 mAh. In general, typical for almost any ten-inch tablet on the Android OS.

If LTE is always on and brightness set to maximum value, the device is “live” for about 4-5 hours of continuous use, which is about 4 hours of screen glow. When combined LTE and Wi-Fi Huawei can work up to 9 hours on the MediaPad M2 toy enough for about 4 hours. If the connected Wi-Fi network in the background and you’re running mail, Twitter, and something else, count on 15-18 hours. 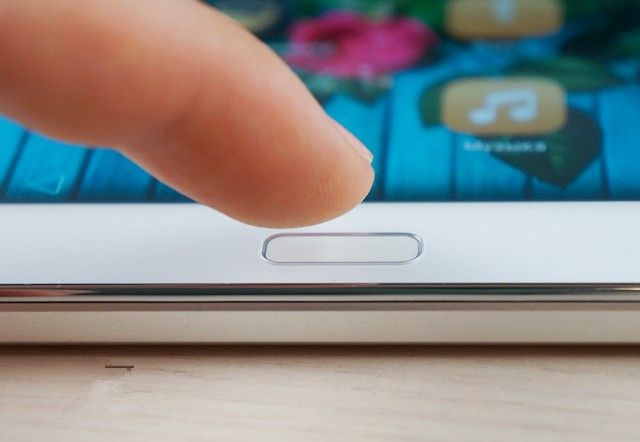 In this model, there is 2 GB of RAM. As I said in the introduction, there is a second version of the tablet – a premium, it 3 GB of RAM. The internal memory of 16 GB (or 32 GB, if the «Premium»), and about 10 GB available. There is a connector for microSD installation (reads all the memory cards of up to 200 GB).

Photo quality is very good for a tablet: accurate white balance and focus, excellent detail, a small amount of noise and artifacts, artistic background blur thanks to the large aperture. When specifying the focal point exposure selected either automatically or manually, which is very convenient.

From minor flaws – light “soap” on the edges of the frame, in the pictures with the scenery is more noticeable. 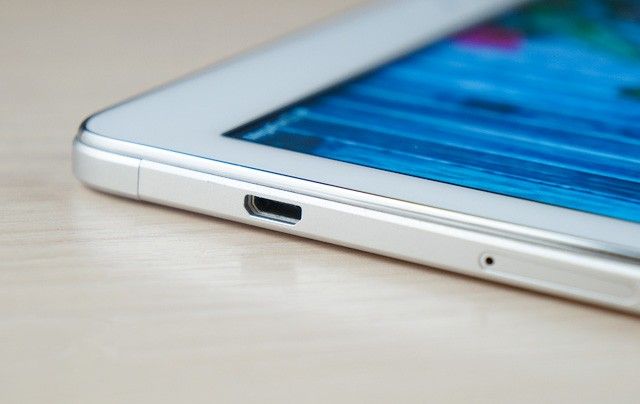 Video unit shoots in FullHD resolution at 30 frames per second. Quality unremarkable. There tachfokus with the choice of the point of focus. The sound is clean, mono.

The tablet MediaPad M2 equipped with a powerful chipset HiSilicon Kirin 930 of its own production, announced in the first quarter of 2015. This chip is in the Huawei P8, Mate 8, Honor 7 Plus Huawei and some other gadgets. Summary: Kirin 930 made on 28 nm technology, there is architecture big.LITTLE, 4 Cortex-A53 cores running at a frequency of 2 GHz, the other 4 core Cortex-A53 – at a frequency of 1.5 GHz.

Also, a coprocessor called i3, responsible for the operation of sensors.

If we talk about the interface speed, then Huawei this never had a problem: even on the “dead” shell perfectly optimized chipsets. C toys things have become much better. When testing plates A2 and M2 (2015) is not installed from Google Play Dead Trigger 2 and NFS No Limit, in Unkilled have brakes. At the moment, nothing of the kind, for example, DeadTrigger 2 and Dead Effect 2 launched for “ultra” -Setting. The only game which is a bit slow (but she behaves and Galaxy S7), was World of Tanks (schedule “ultra”).

In this case it is necessary to talk about an improved audio system (with respect to the previous Huawei tablet). I recall that in M2 (2015) we have seen collaboration of Chinese companies and the American firm Harman / Kardon, specializing in the production of consumer and automotive electronics HI-END. Huawei Staff decided to use four speakers, the total capacity of which reaches 4 W MediaPad M2 (2016). They are quite large by the standards of mobile devices (10h20h3 mm) and maximum volume of their sound up to 90 dB. Also, the tablet has a sound chamber and applies proprietary algorithm for correcting phase distortion. It is interesting that the speakers are separated in pairs: one pair is responsible for the reproduction of high frequencies, and the other – for the low frequencies. Experimentally, we found out: the lower the speakers reproduce the mid and high frequencies, upper – lower frequencies. However, frankly speaking, most of the top speakers were quite audible. The impression is that the audio stream from the bottom (naturally) gets to the top of the unit.

From the press release:

“Another pride MediaPad M2 10.0 – a unique patented algorithm processing HARMAN Clari-Fi ™ sound, to effectively restore those details audio that are inevitably lost during compression of digital files for transmission over the Internet, for storage on compact storage media, etc. . As a result of Clari-Fi ™ algorithm music regains lost halftones, expressiveness and emotionality. On each plate logo brand suffered Harman Kardon, testifying to the device according the highest standards of the world famous manufacturer of premium audio equipment. ” 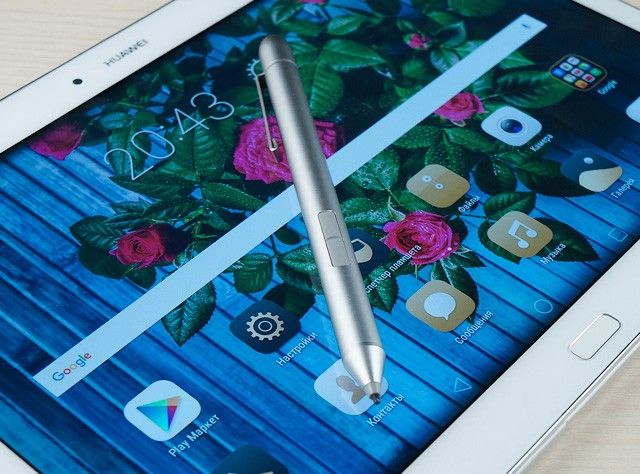 In simple terms, the M2 sounds pretty good, certainly better than any tablet I tested (the sound close to the iPad, but it is not as deep and pure). Volume is sufficient to use the gadget as a “music box”.

Device Huawei MediaPad M2 10.0 has made a good impression: okay assembled, high-quality materials, good technical characteristics, loud speakers and the ability to use the gadget as a tablet for drawing (not a graphics tablet, but it is not just the operation of a capacitive stylus).