Review of the tablet Xiaomi MiPad 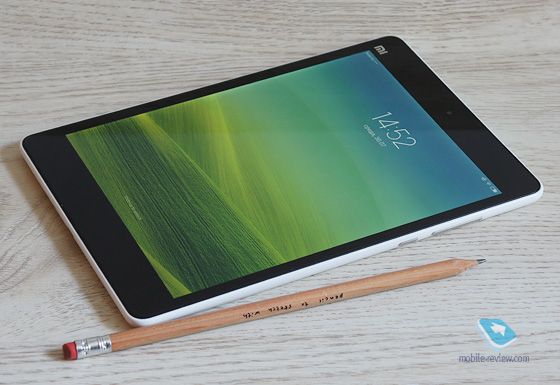 Appearance of the first tablet from the Chinese Xiaomi waited a long time, and it was more of a matter of time, rather than “will appear or not.” After the success of virtually every next model smartphone Xiaomi release tablet seemed a logical step, and, finally, the moment has arrived. The company introduced a novelty in the spring and the summer began selling in China. And, although officially buy a new tablet Xiaomi MiPad in Russia can not be, in the twenty-first century, fortunately, you can buy almost anything from anywhere. And MiPad – is no exception.

The site has a small material on the basis of the presentation Xiaomi MiPad describing the main characteristics and features of the model, in the review, I will try to reveal all of this to the unknown moments and share their personal, subjective impressions of one of the most powerful tablets on the market in 2014.

The tablet comes in a compact box made from recycled materials, it is very dense and strong. Inside, in addition to the device, only the absolute minimum – a charging unit, cable and paper instructions.

In Russia, the tablet sell a variety of online shopping and delivery may be different, someone put in a box bonus, someone, on the contrary, forget an adapter plug with an Asian to European. Therefore it is better to specify in advance whether there is an adapter in the box. In the sample that I took the test, so the adapter was included. 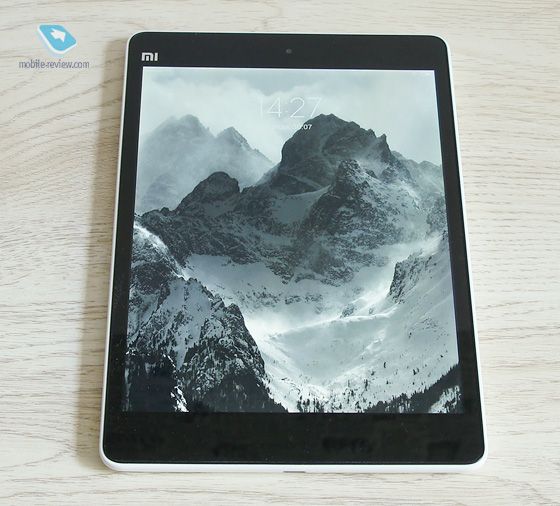 Tablet Xiaomi MiPad – a first for the company, and it would seem there must have been to work on the design. Alas, instead Xiaomi decided to invite two “legendary designers from Samsung» (one holds “iPhone”, encircles the second), which not only helped to circle the Apple iPhone 5c, but its design is scaled to a larger device. Thus Xiaomi MiPad – just an enlarged iPhone 5c and it’s not a figure of speech, but a simple fact. Even in the company did not hide the similarity with the iPhone 5c, however, hinting more on materials of the body, rather than the design.

From the Apple product to Xiaomi MiPad went plastic, color and shape of the body, similar curves. Glossy plastic – a good solution in terms of appearance, especially official renderings of the tablet, they are it looks amazing. In practice MiPad is the brand, as well as iPhone 5c, this should be ready. The unit is constantly covered with fingerprints and greasy stains.The solution to this problem – some case (when they are available and if there will be).

More about colors. The choice will be available six colors: pink, yellow, blue, green, white and dark gray. In Russia, to find a model other than the white it is difficult, perhaps, they will appear later. 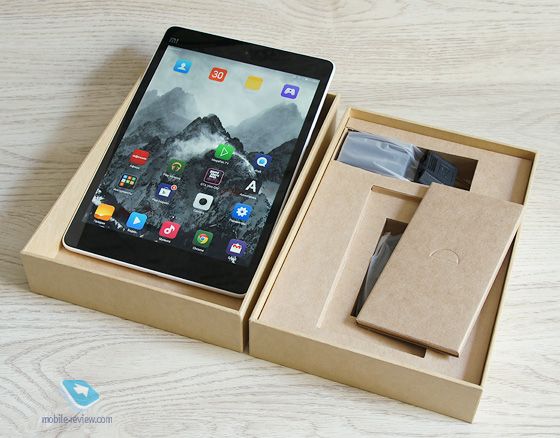 By the size and weight of the plate close to the Apple iPad mini 2 is a compact and relatively lightweight device for use not only at home or in the office, but also on the road, traveling, and just on the go.

The tablet is quite comfortable to hold with one hand, the two – even more so. Of course, in the pocket of jeans, he barely fit, but overall the device compact and carry it with you – no problem.

On the front side, below the screen are three touch-sensitive keys – “Dispatcher running applications”, “Home”, “Back”.Additional actions to retention or double click these buttons are not provided, the keys with white backlight and light vibration when you touch.

On the right edge are located the volume keys and power at the top end 3.5 mm mini-jack and the microphone hole on the bottom – microUSB.

On the left edge is a tray microSD card, access can be obtained using a complete “paper clip”.

The front camera is located on the front part of the screen, the main on the “back” of the tablet (top left). The stereo speakers are located at the bottom.

Screen – the main advantage and unconditional Xiaomi MiPad to a multitude of other small plates. It’s not HD or even FullHD-matrix display has a resolution of 1536×2048 pixels, the value of PPI – 324), using IPS LCD-matrix.

The screen is protected by glass Gorilla Glass 3, has a good supply of brightness and maximum viewing angles. Like it or not the tablet – the picture remains largely unchanged, except that when a deviation to the left and right image is a little yellow.

If relatively smartphones the need screens with such a high resolution is still open and the release of LG G3 display 1440×2560 pixels response to it does not, then the plates increasingly clear. When the diagonal even at 8 ‘is the difference between 1920×1080 and 1536×2048 screens on the eyes visible, albeit minor. 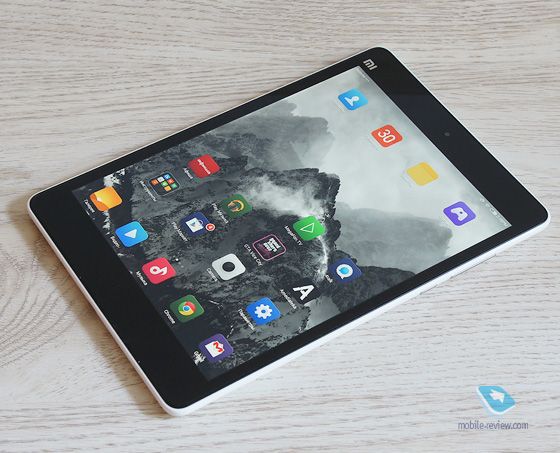 The only problem with the high-resolution screen, and is not relevant to all (but for me, for example, very) – difficulty in the selection of images for your desktop. I understand, it looks far-fetched and ridiculous, but you try to find at least ten to twenty pictures resolution is so high that they are ideally looking for a tablet in both landscape and portrait orientation of the device. In general, it is not easy.

Tablet is built on the latest platform NVIDIA Tegra K1 and is the first device on it to go on sale. At the heart of the platform chetyrehyaederny processor ARM Cortex-A15, clocked at 2.2 GHz, as well as the graphics subsystem NVIDIA Kepler with 192 nuclear NVIDIA CUDA. In practice, the platform is easily copes with high resolution screen Xiaomi MiPad and use the tablet comfortably – no podlagivany, locked up the interface, delays in drawing or open applications. Games MiPad also are all available in the Play Market with no problems.

With video playback, too, everything is fine. Tablet “cool” any video at 720p and 1080p as if the movie does not start in a standard player or video plays without sound ((there is such), you can always install MX Player or Dice Player, as a rule, with their installation problems are solved.

In plate 16 or 64 GB of internal memory, there is also a slot for a microSD memory card with optional cards up to 128 GB.RAM device 2 GB.

Below are the results of various benchmarks, as seen in most tests Xiaomi MiPad provides record levels. In practice, this translates into, as I said above, in the finest performance, without a hint of brake. 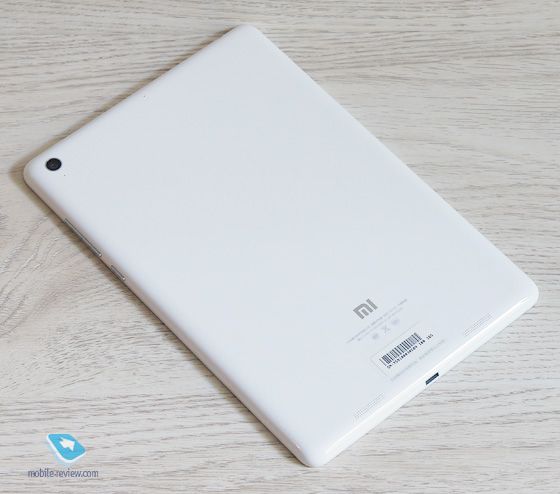 In MiPad has two cameras – the main with a resolution of 8 megapixels and autofocus, and a front with a resolution of 5 megapixels. Consider their ability and discuss the quality of images, in my opinion, it makes no sense, not too many will use the camera to take pictures of the tablet something important. So I’ll just give the following examples of pictures with the main camera.

In Xiaomi MiPad has a removable Li-Pol battery capacity 6700 mAh. Claimed battery life of the tablet in different modes as follows:

Oddly enough, but according to the manufacturer data is very close to reality and even a little inferior to her, if we are talking about a power saving mode (most likely, measurements are given for normal operation). 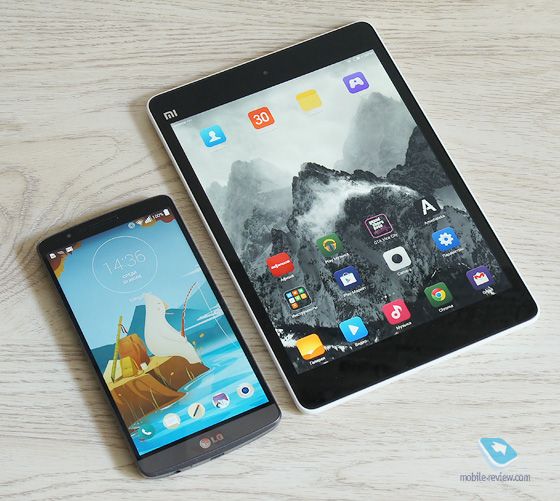 For the benchmarks I’ve included in the settings (power mode) high-performance mode, but in the eyes is the difference between high performance and energy saving is not, so I used the tablet is in the latter mode. Video as 720p Xiaomi MiPad I lost an average of 14 hours (I spent three and test scores were within 15 minutes), the brightness slider to the middle position, Wi-Fi off.

While viewing Web pages via Wi-Fi tablet is running just a very long time, I was looking through the week with him working sites, read forums and so on, the day is about 3-4 hours on the internet, MiPad worked in this mode this week.

Indicators runtime, in my opinion, the tablet just gorgeous, other words and does not pick up. By the time the work is the only competitor to the Lenovo Yoga Tablet 8 today, if we’re talking about Android-tablet. Thus Yoga built on weak and thus not to the battery demanding platform and equipped with a screen with a low resolution. Here, in Xiaomi MiPad, we are talking about topom hardware and display the highest resolution. 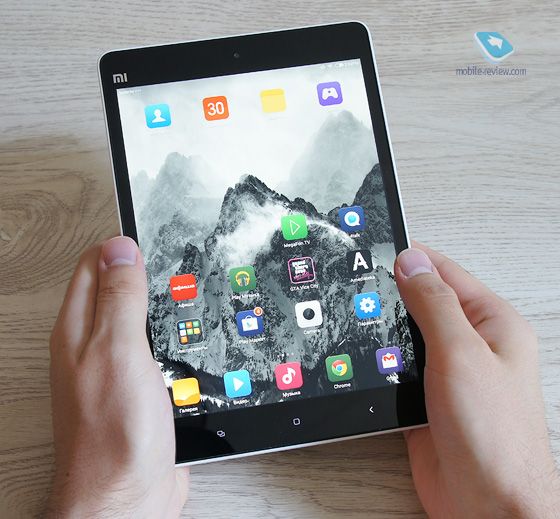 The tablet is equipped with a Wi-Fi module and Bluetooth, version-enabled mobile networks do not have. Dual-band Wi-Fi and Bluetooth are running flawlessly.

Tablet running MIUI (based on Android 4.4.2). in my sample firmware MIUI 4.7. In general, it is usual to anyone who is familiar with the smartphone version of the MIUI interface, but with some reservations. Yes, there is also no menu and all programs are collected on the desktop and in folders. However, there is a separate widget for your desktop, you can not make them out, as long as there is no way to change the theme (if strongly needed, you can restore the hidden application shortcut “Themes”, but themselves for the fact MiPad there still will not).

Curtain notification is divided into two pages, one for yourself notice in the other – wireless switch settings and shortcuts.Window transition between programs familiar to OS Android.

A set of applications in MIUI for MiPad poorer than the smartphone version of firmware, but all the missing software can then download your own.

Overall impressions of the MIUI for the tablet I have disputed, on the one hand it is usual, we can say native and familiar interface I, on the other – its tablet version yet crude and work on it is not as actively maintained as above the base. Why can not place widgets on any screen, why the entire area of ​​the shutter notifications under the notification themselves allocated only a small area in the center of the screen? Why is there no themes, and the labels of some applications system “packages” in the squares, while the other labels – no. Hopefully, and tablet version of MIUI will develop more actively. 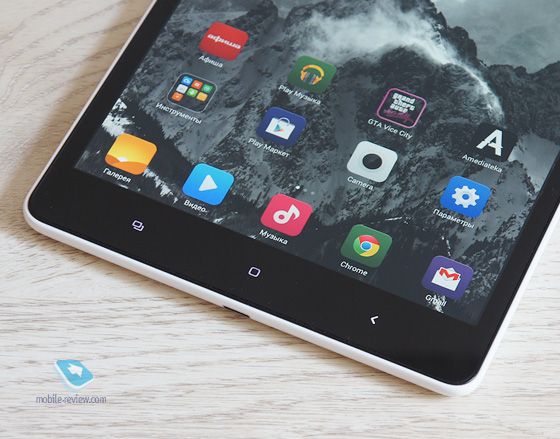 The official cost of Xiaomi MiPad 16 GB is about 240 USD 1,499 yuan), the version with 64 GB of memory – about 270 dollars (1,699 yuan). In Russia, 16 GB MiPad costs an average of 12 000-14 000. On the one hand, it’s a lot, because if you order the device directly, you can save the other to buy directly, you need to get on one of the rounds of shopping, passing pre-registration, and then pay for shipping and wait for the tablet, or order it in one of the Chinese online stores that deliver. In short, everyone has a choice to buy the device here and now more or ordering and delivery for less.

Even if we consider the Xiaomi Mipad with the cost of the online stores in Russia (12 000-14 000 for a younger model), it is still very, very attractive offer of compact tablets. The most powerful in the mid-2014 platform NVIDIA Tegra K1, record levels of battery life, gorgeous display with high resolution and high quality picture – these are the main points that make Xiaomi MiPad interesting. For comparison, the easiest Samsung Galaxy Tab S 8.4 with 16 GB of memory (without the support of mobile networks) is an average of 18 000-19 000 and Apple iPad mini retina 16GB – about 14 000-15 000.

So if you are looking for a compact tablet for video games and having a good time work, you should definitely pay attention to the Xiaomi MiPad, despite the complexity of the purchase, in some embodiments.