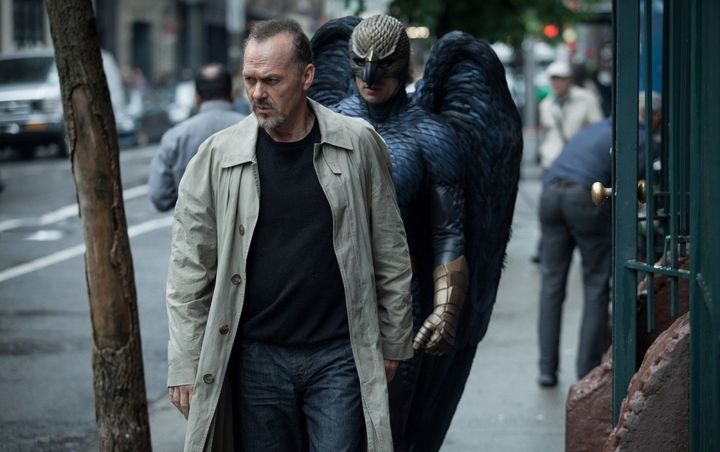 Art for art’s sake, or clearly planned work of genius? “Birdmen” sometimes maybe too much trying to be topical commentary on the nature of the entertainment industry, but nevertheless he never falls too philosophical to walk around it. How accurate and vivid soundtrack, composed exclusively of drum tracks, “Birdmen” cannot seem boring or naïve. He hits right on target, right in the bull’s-eye, showing a rare case where all moving parts are equally memorable and together create a major achievement of cinema over the last year. Brilliant extraordinary movie, impulsive, angry, intense and deep.

Alejandro González Iñárritu makes this modern fairy tale. A little weird, a little funny, a little sad, but in any case instructive and interesting. The film seemed to glide along with one endless scenes Emmanuel Lubezki (the film really cast as a single block, more than pohlesche “Gravity”) on the backstage secrets of the theater, without stopping, without stopping at the shortest interval. This is one big action-packed, where problems continue to pour on the heads of the heroes of every minute, and passions boil until closing curtain. Only at the end of the thread of the narrative as if slipping on for about five minutes, which is enough to make the audience wonder what it all meant.

Review of the movie “Birdmen” 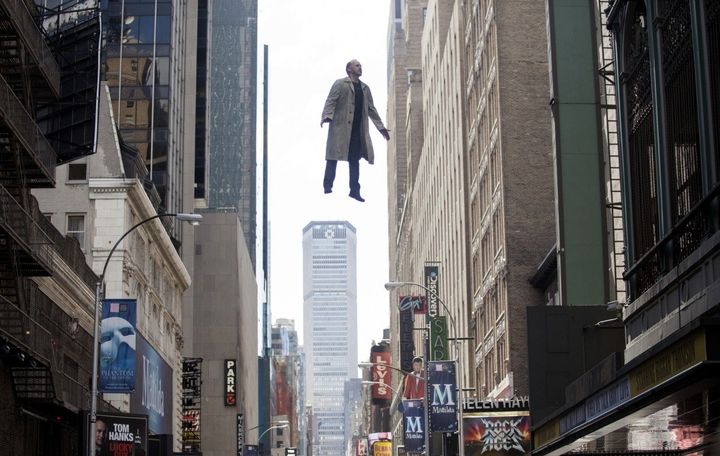 Certainly play this cinematic spectacle actors class. Inarritu squeeze all the juice out of Michael Keaton, who seems to have lived up to the role of landmark in his career. Emma Stone and Edward Norton electrifying room, fill it with magic emotions. Norton stands out. It resembles a rocket that flies back and forth, so that only sparks in all directions. Who would have thought that Zach Galifianakis can play like that?! 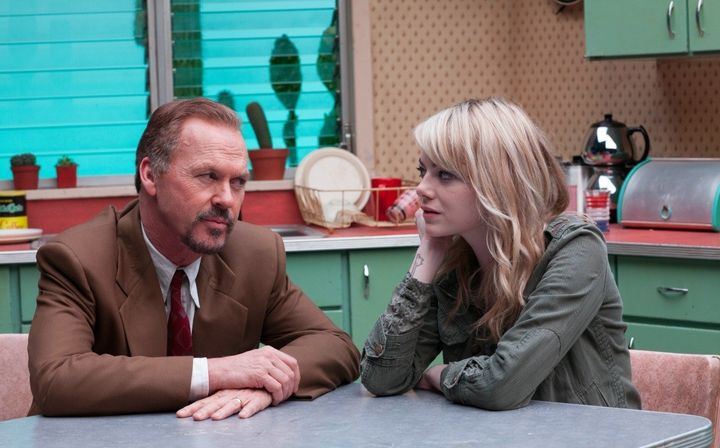 All are held on the thin line between replay and nedoigryvaniem, managing to maintain a balance to such an extent that the false notes in the film you will not find no matter how hard you try. No wonder Keaton stated in an interview that he and Inarritu perfectionists.

The screen is impossible to look away. “Birdmen” sucked into the storm of color, movement, and talent. The entire film is reminiscent of one big metaphor industry. 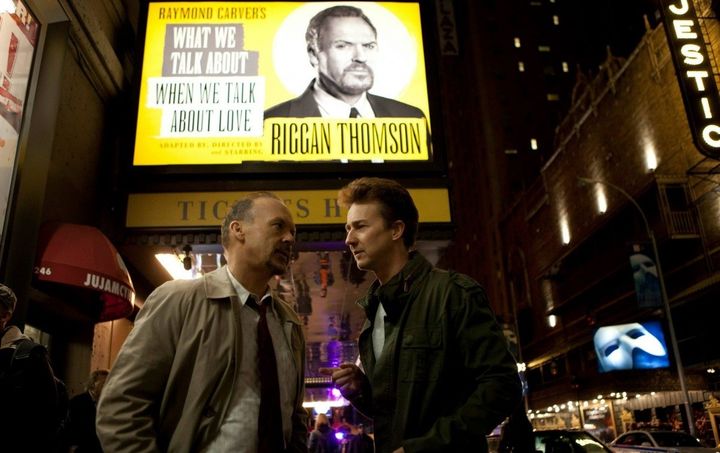 It’s not by chance director’s decision to present it as a single frame. Not accidentally elegant thundering music in the background. Not random items and symbols, generously scattered throughout the film. Not the case in the end farce that no-no creeps to the fore, adding sharp humor. Inarritu immerses you into the world of theater. 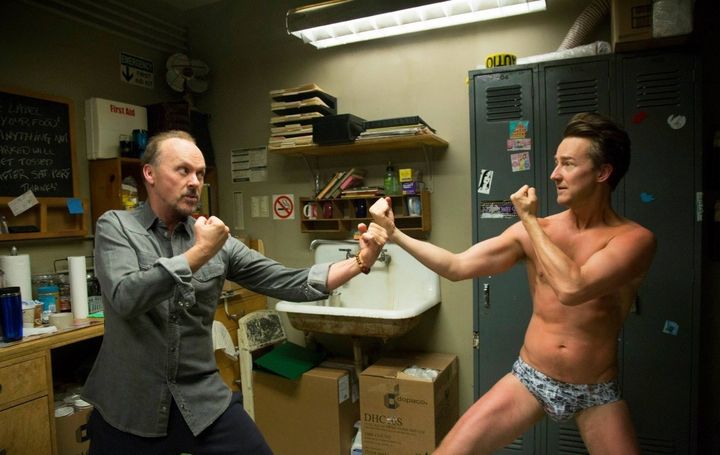 In the world of raging and managers who do not believe in the art of producers in the world behind the scenes secrets and mysteries, challenges and endless periods of excitement and responsibility, pressure and creativity. “Birdmen” at least fun to watch, because in some mysterious way the director manages to surprise you again and again, Charu and mesmerizing. 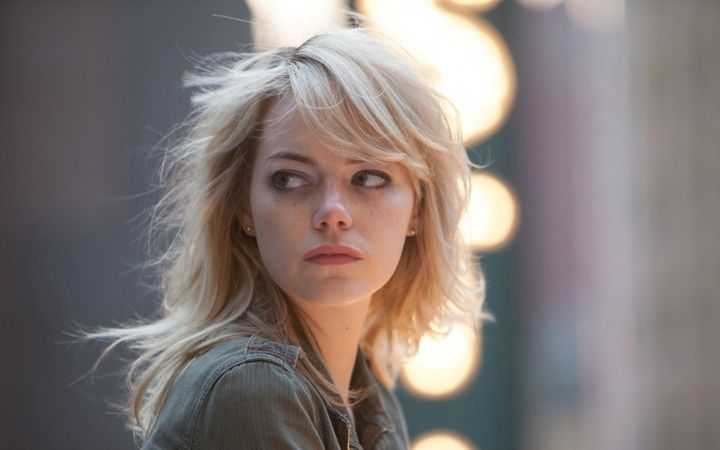 A large role in this is definitely scraped script with dialogues and monologues so exciting that any action scene modern blockbuster and they do not hold a candle amiss. Visually, the film is so unique, and so the style is maintained constant and that the words to describe what is happening on the screen is not found. 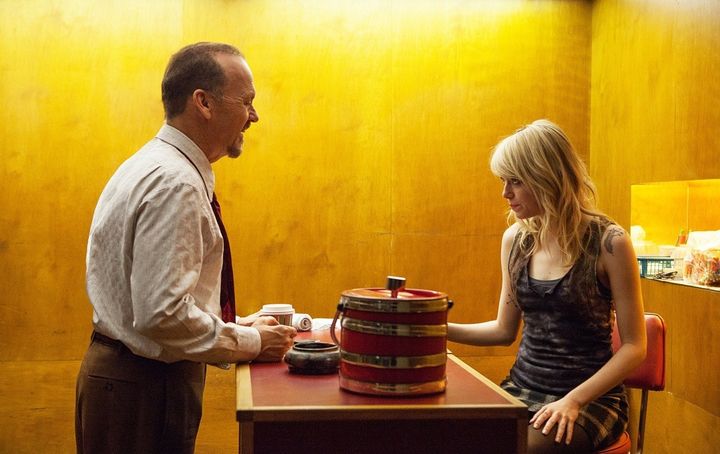 What could be wrong with “Birdmen”? Iñárritu does not provide answers, and more than that, judging, does not offer a solution. Therefore, the ending is imposed are blurry and unclear. As if the director (who is also a screenwriter) knew that out of this movie almost none. To such an extent that it would only be won, tear off the picture somewhere in the thick of the action. Because as well as viewers have to think out for yourself. And believe me, the movie leaves many topics for reflection and debate.

Regardless of whether you’ll end or not, “Birdmen” certainly go down in film history as one of the most memorable films. Thin, exciting, flavored with a pinch of komiksomanii and hints of wisdom, continually sounding sparkling dialogue among the characters. “Birdmen” finds the perfect balance of form and content. This swirl of master classes from the best actors industry, imagination and theatrical beauty if not duplicitous life, then certainly the entertainment industry.