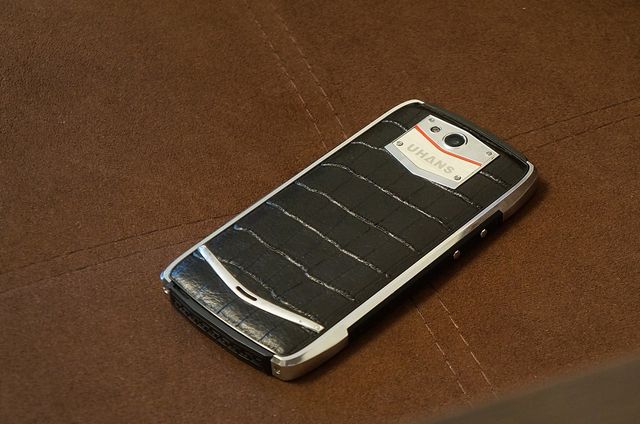 The Chinese company Uhans ( «U» – from the English «you» – «you» and «hans» – short of the words “phone hands” – “hands”, that is to say something like “we value our customers, who are holding smartphones “) introduced a device called Uhans U200. The technical specifications will not go, because they are typical of low-cost device, but on the material in more detail. The fact that the Uhans U200 is made from solid metal bar, the front panel is protected by tempered glass, but the most interesting thing – the back cover is covered with natural leather ox. On this subject we have joked on Twitter: “And the ox dad was a crocodile?” In fact, the texture of the back panels device more like a crocodile skin than the skin of the bull. In general, if you look at Wikipedia, the ox – castrated male cattle. You can feel a little strange, knowing that you hold in the hands of a castrated animal skin … Yes, guys? 🙂 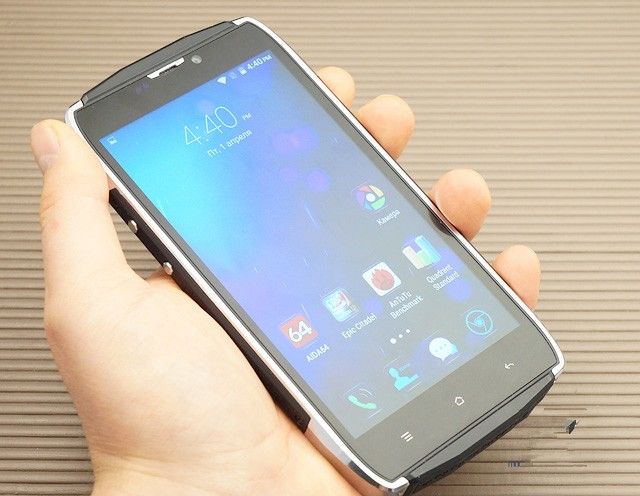 Chinese manufacturers have decided to do something similar to your Vertu, but as budgets were not of such a magnitude, the result is a machine Uhans U200. Dimensions of this gadget is quite impressive, if we talk about screen diagonal of 5 inches – 147h76h12.5 mm and weighs 207 grams. Despite all this, in the Uhans U200 hand it is fine, it is the most for a large man’s palm.

The front panel is protected by a durable tempered glass. During the testing time, nothing bad will happen to him. Oleophobic coating is, however, some resources say that it is not. In my present Semple. Quality I liked: prints though noticeable, simply erased, and the finger slides easily.

Most of the side faces – a thick metal frame (brushed aluminum). The layer thickness can be up to 4 mm. Between the housing and the metal frame is plastic.

Right and left – rubber inserts with patterns. Top and bottom – a similar but are framed by matt plastic.

On the reverse side is a metal plaque with six corners and bright red plastic insert in the middle of crows. Provided above the body about a couple of millimeters, allegedly kept riveted. Top engraved «UHANS».

Below you will notice the chrome “iron” arc, the center of which is a hole for the speaker.

Oh, and most importantly – the material of the cover. This leather ox, at least so says official source. On the invoice I already spoke in the introduction above.

In addition, the company’s website says that Uhans U200 carries moisture. But do not rely on a certain degree of protection, despite the fact that any machine without any problems working in a wet environment, for example, lies in the bathroom when you take a shower (of course, without immersing it in water and with no direct contact with him splashing) or when you just wet hands.

In general, I personally like the design and execution, although many would argue that it looks more “collective”. Frankly I tell you: many Vertu phones also look too easy, and at times awkward, and there are several orders of magnitude more expensive Uhans U200 (among other things, the performance characteristics of the British phone company is often much worse than the Chinese).

On the front of the gadget on top – camera, sensors, missed event indicator and the voice speaker. It sounds clean, the interlocutor is heard distinctly, the volume average. Under the screen – the standard Android buttons deposited with silver paint.

Bottom – the microphone on top of a rubber plugs (likely, over time, they become loose and come off) – headphone jack and microUSB. 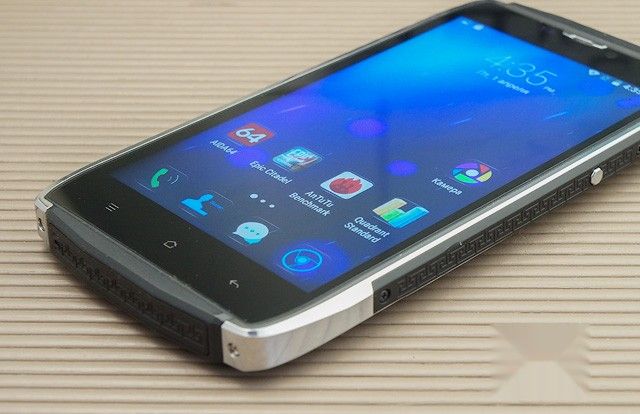 To the right is the power button chrome metal in the form of an octagon, and the left – the same type of two separate volume control keys. Unusually.

On the reverse side – the camera, flash and speaker.

Ironically, collapsible housing. The cover is removed by poddevaniya her neckline from below. Socket is thick and durable (plastic bottom, the top skin). Under it – two slots for sim-cards in the format “mini” and “micro”, as well as a connector for memory cards microSD.

This device uses a screen diagonal is 5 inches. The physical size – 62h110 mm top frame – 16 mm, bottom – 21 mm left and right – of approximately 7 mm. There is anti-reflective coating, quite effective. 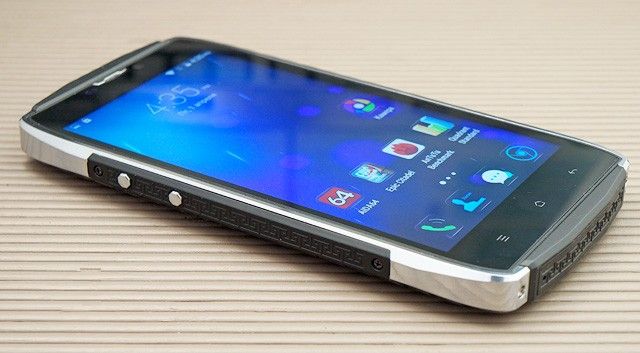 This model uses a removable Lithium-Ion (Li-Ion) battery capacity of 3500 mAh. Official data on the working time is not.

I noticed a small oddity: the battery is discharged evenly to about 10 percent, and then abruptly cut down, after switching on the screen displays the 1 percent. 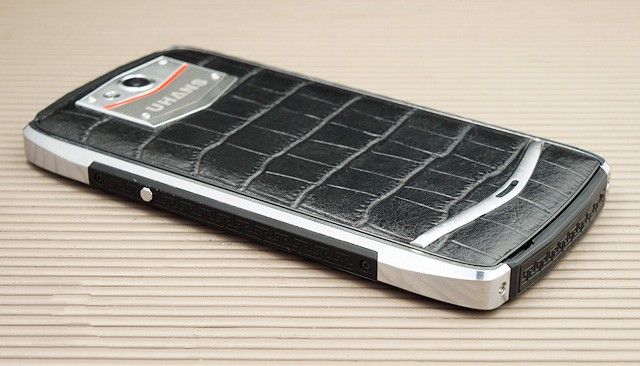 Includes AC adapter to 1 Charging AV gadget from it in 4 hours, so I advise you to buy a more powerful power supply.

NFC Chip and GLONASS No, the rest is standard for all of Android-smartphone with two sim-cards, GPS (sensitivity slightly lower than the average), Wi-Fi b / g / n, Bluetooth 4.0, USB 2.0 with OTG support. 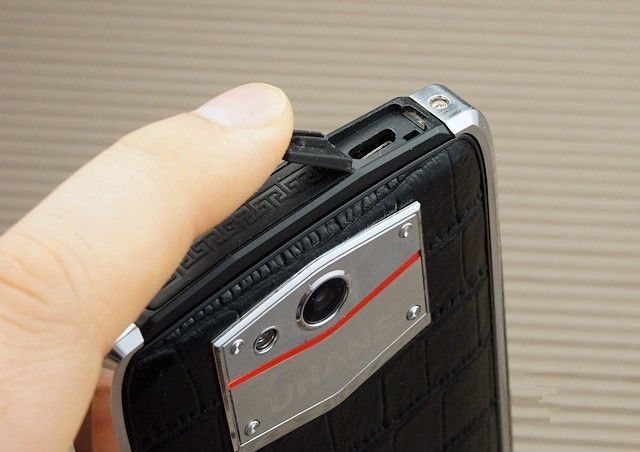 Uhans U200: Memory and memory card

It uses 2 GB of RAM LPDDR3 800 MHz. The built-in Flash-memory 16 GB – it is written on the site, but in reality there were 8 GB and is available just less than 7 GB in my model. Naturally, there is a slot for a memory card (supports up to 200 GB).

Traditionally, there are two modules of cameras: 13 megapixel Sony IMX 164 (officially it is said that the aperture F2.0, but applications indicate F1.8) and 5 megapixel OmniVision (F1.8 aperture). There is a LED flash. Unfortunately, the interpolated resolution. In this case, 13 MPs – 8 MP and 5 MP – 2 MP. 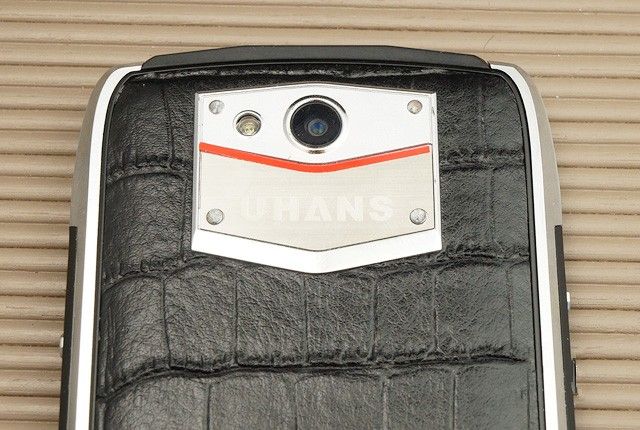 The main problem of the camera is that it has bad dynamic range: the frames are either overly bleached or dark. Detailed average, mainly picture mylnovataya, white balance sometimes “jumps”. From a large aperture is a plus – with HMD (low-light conditions), the image is quite readable, color, natural, detail is not broken.

Focusing is fast, but extremely inaccurate, especially when shooting close-up: the machine can “stretch horn” to infinity and to abandon direct sharpness. This happens most often with HMD.

Video unit writes at resolutions up to HD at 30 fps. The quality of photos is similar – zero dynamic range.

If we talk about optimizing software, the Uhans this all perfectly: the interface is smooth, without any hint of brake applications run fast. With toys, too, is more or less OK, but do not count on maximum settings and 60 FPS.

It should be noted that chip MT6735 designed as an inexpensive solution for use in devices that may operate in different networks. Therefore, its main feature – LTE, rather than high performance in games.

New functions at a relatively recent version of Google Android 5.1 operating system, which is already good. Shell proprietary, but from the “naked» Android differs only in the design of icons.

The settings include such things as:

Smart Motion – a quick response, a quick call, switching to silent mode, and so on;

Gesture – various switch and enable using of the hand above the screen, and creating a screenshot, if you hold three fingers across the display from top to bottom;

Wake gesture – the awakening of the phone by double-tapu, slides up and down, start the camera (picture letter “C” on the lock screen) and similar functions.

The music player standard. The speaker volume is high (in some ringtones just screams), the quality is slightly above average, but not enough bass notes.

The headphone volume is slightly above average. Quality usual for such devices. It is necessary to listen to. I like it. In the settings is “Sound Enhancer”, but I advise you not to touch these parameters – will only make things worse.

In this case, everything is very simple: if you want to make on others a little wow-effect – always look at the Uhans U200. And even when you do not have appearance is important, but needs a robust and reliable device from the point of view of assembly, again – it is U200 from Uhans.

However, if the above you are not interested, the technical characteristics of the 8 000-9 000 rubles for this gadget is quite good: high-quality screen, 2 GB of RAM, capacious battery, two sim-cards and communications LTE.

Among the shortcomings, perhaps, it is worth noting the following: is a completely unknown brand (from such companies can be expected all anything – and buggy firmware, and defective devices), weak processor, medium-quality camera.

virtually no direct competitors with a leather cover, if you do not talk about enough of expensive devices such as LG G4, Asus Zoom and luxury. 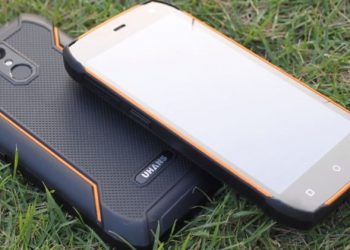 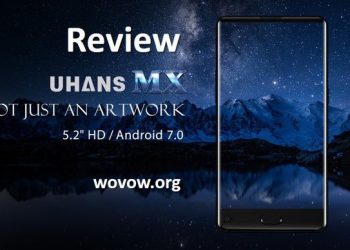 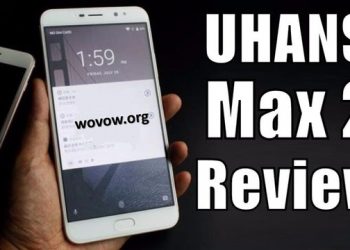