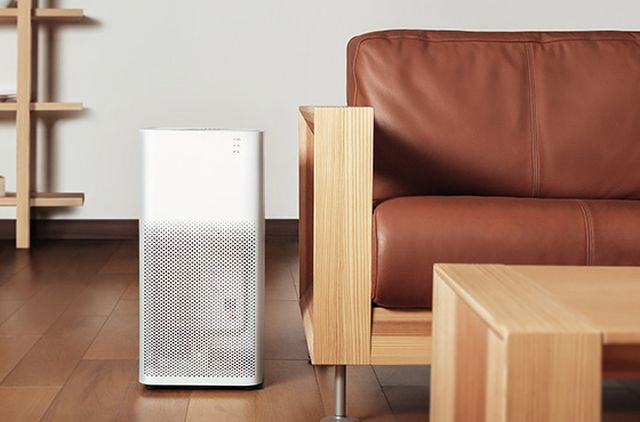 In fact, Xiaomi has managed to produce two versions of air purifier. The original model, Xiaomi Mi Air Purifier, proved to be too large for use at home, and after some time, the Chinese released Xiaomi Mi Air Purifier 2, he was about a half times smaller at comparable performance. But back to the basics of this idea.

Air Purifiers – a separate class of household appliances belonging to the “beauty and health” or something similar. There are humidifiers, air washers, ionizers, cleaners and other things. In the case of the Xiaomi Mi Air Purifier we talk about air purifiers are designed to remove harmful particles mainly PM2.5 – fine dust. The fact that according to various sources and research, fine dust is the cause of many diseases, including cancer. For example, in 2013, “The International Agency for Research on Cancer» (IARC) has published the results of studies in which it was noted that the solid particles and air pollution increases the risk of lung cancer, and, on the IARC data for 2010, the cause of more than 200 thousand of cases of lung cancer was just air pollution. In China, the issue of air pollution is particularly acute. Big cities like Beijing and Shanghai for months sometimes drowning in smog. Arriving there, if you find yourself in the land of the movie “The Matrix”, where the sky was overcast clouds and sunlight streaming through not just them. It is, in fact, a very unpleasant feeling, and that the air is dirty and heavy, you feel almost immediately, being in a city. What then to speak about the people who live in these cities permanently? 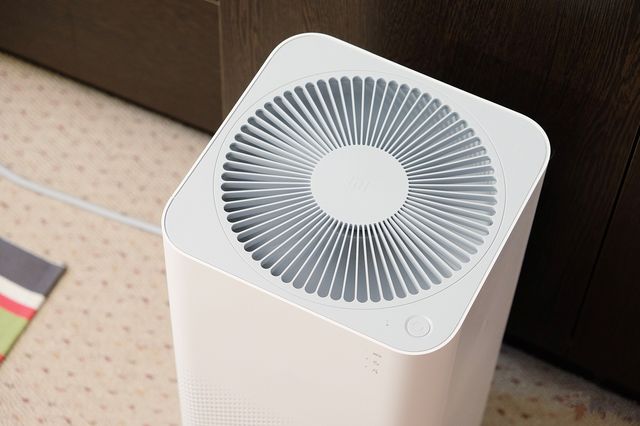 It should be noted that the appearance of the air purifier Chinese did not develop on their own, and, as in any other sphere, merely borrowed. The inspiration (stroke) was a Japanese AirEngine air purifier from the company Balmuda.

Anyway, it turned out great, and accuse the device in the absence of beauty and grace, despite the fact that this is the usual box of white plastic, it is impossible.

The size of the new Mi Air Purifier became noticeably smaller first model, which is good.

Top panel cleaner – model for the output of purified air. Underneath two fans are located.

On the side faces – the holes for air intake, they are located on three sides. 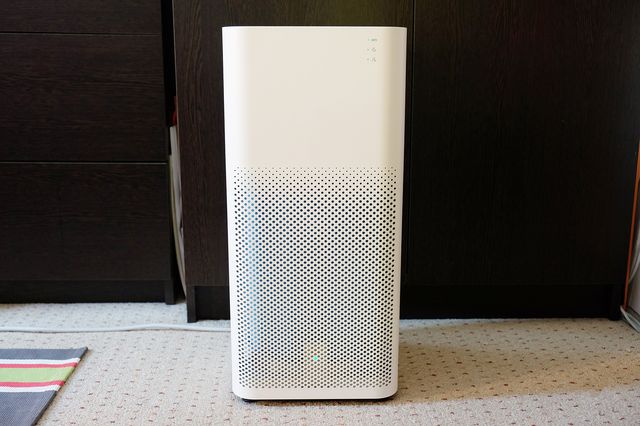 Unlike the original Mi Air Purifier, which has been two filters (external to the grid for coarse and pleated HEPA-filter to minimize particulate matter, and the inner filled with activated charcoal) to Mi Air Purifier 2 left only one external filter.

The principle of operation as simple as possible – a cleaner sucks in air from the surrounding space, runs it through the filter, cleansing of harmful particles (primarily PM2.5) and outputs through the upper region.

Declared wiper performance – up to 310 cubic meters of air per hour when the corresponding mode. 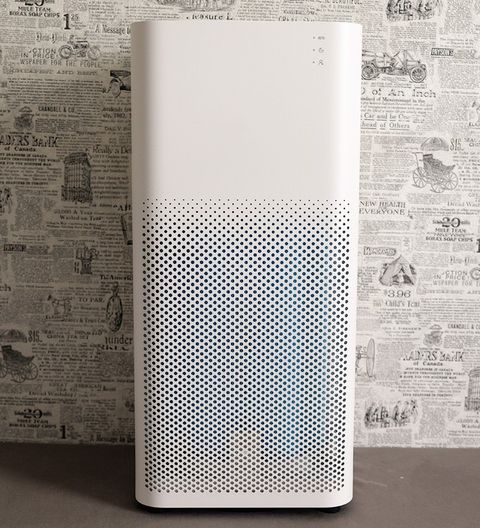 The important point, complete cable plug is different from what we are used to seeing, including devices in China, so if you order a cleaner, is to attend to the search for an adapter or cable to use instead of the bundled some his own, from the power supply, for example.

In general, the air cleaner has on the body of a button, and it is enough to turn it on and select the desired mode. In total there are three – “Cars”, “Dream”, “The selected profile.” 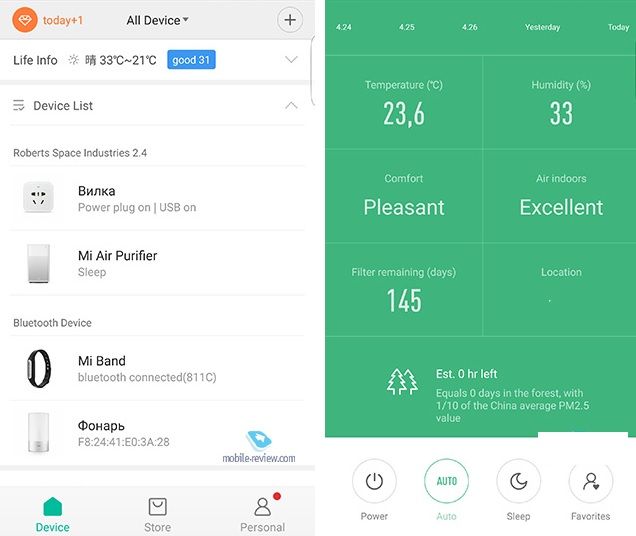 In the first cleaner operates at the level of performance that is required for cleaning the premises in a quiet (silent mode), based on the internal sensor. The sensors measure the level of pollution of the ambient air and displays this information on the display panel on the front wiper. If it lights up green – clean air, red – dirty. Mode “Dream” is designed to work the cleaner at night or when it is necessary, not to make noise, – low productivity pays almost no fan noise. Finally, the third mode – it must be set up through the app. Choose the area that you want as quickly as possible to clear, and to include this mode, switch the cleaner for maximum performance. Noise in doing so he will be very strong, not like a vacuum cleaner, of course, but still. 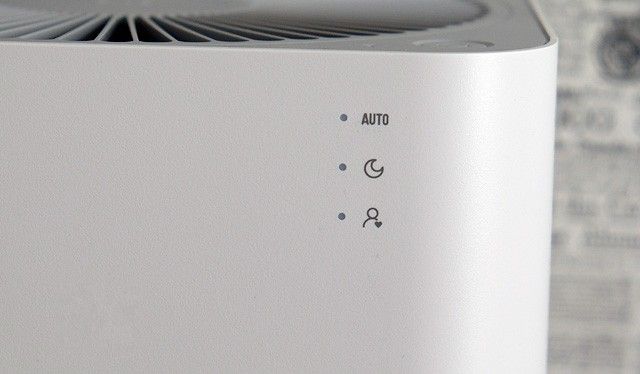 All additional information from the cleaner, and most importantly – the current level of air pollution, it is possible to see through the Mi Home application. Contact cleaner is configured via a router (a common home Wi-Fi), and in the future cleaner modes of operation can be controlled from any location, even if you are not at home.

The application displays useful data and various settings. You can also configure the timers to run cleaner, select the LED brightness, enable or disable sound notifications, and other parameters.

Cleaner copes well with its responsibilities, and the level of air pollution particles PM2.5 I now very low, the average now – 10-15 units, whereas prior to installation Mi Air Purifier figure was at the level of 30-40 units. No other positive effects on the operation of the device I have, unfortunately, had not noticed. On site Xiaomi Mi Air specification states that it cleans the air not only from the PM2.5, but also from dust and other larger particles (including hair), and it is hereby spodviglo me on its installation. I naively thought that by setting such a thing in the room, I can get rid of the dust or, at least, will be engaged in cleaning the room less (now I do it every 2-3 days). In the two months after the end of the work of a cleaner I can say that neither it does not help on any visible dust. How about I have a layer of dust on the table for two or three days, and going as I spent most of the cleaning of the dust once in two-three days, and spend. 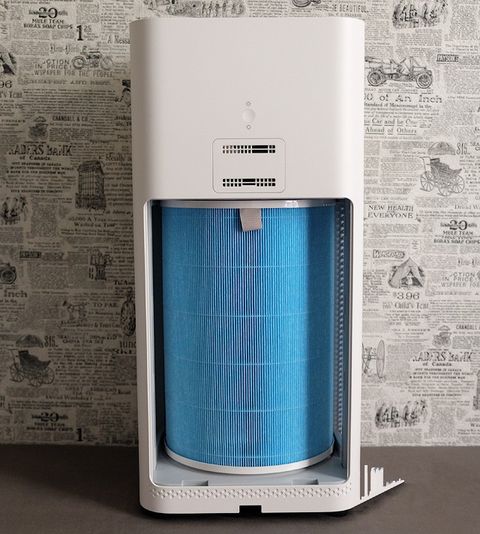 At the same time I do not want to say that Xiaomi Mi Air Purifier 2 – a bad device. First, its main task is to remove all the harmful particles of another persuasion, of PM2.5, and this, according to the testimony of the device and application, Mi Air manages more than good. Secondly, it is clear that “my expectations – it’s my problem,” and there was silly to wait for the complete removal of normal household dust. However, I want to note that there are still other effective instruments to combat dust. For example, not so long ago I was a few months enjoyed air washer from LG, LG Mini On, and behold, there was a noticeable effect on the part of the dust: during this time, I noted, even visually that the dust in the room was smaller and the cleaning can be carried out once a week, ie, twice as often. This instrument I will cover in a separate article.

In China, Xiaomi Mi Air Purifier 2 is 1000 yuan, with the purchase of his (now) from the online store can not, you need to look for the device in partner stores. On sites like GearBest.com or other device costs an average of 160-180 dollars. This air purifier from Panasonic twice or even three times more expensive. Yes, as a rule, it is a different class of devices and there are combined treatment systems, humidification and air ionization, but still. If you need some simple device to clean the air from harmful particles, pay attention to the Xiaomi Mi Air Purifier 2.

P.S. Associates ixbt.com site conducted a very detailed testing of the first model, Xiaomi Mi Air Purifier, so if you are interested in details such as the noise level in the different modes of operation of a cleaner, energy, principle of work and the engine unit and other things, recommend that you read their stuff .