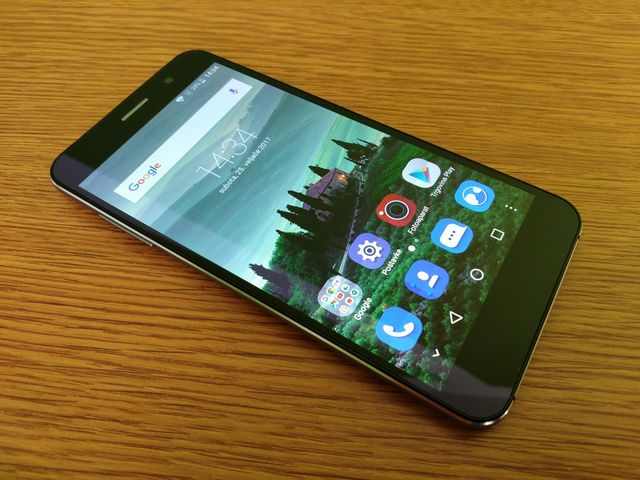 September 2016, ZTE released its new smartphone named ZTE Blade A910. The novelty, like its counterparts in the lineup, fell into the budget segment, taking into account not the most modern specs. Although the price at the start of sales was far from budget – around $245. Now the device is slightly cheaper, and users slowly began to look closely at it. 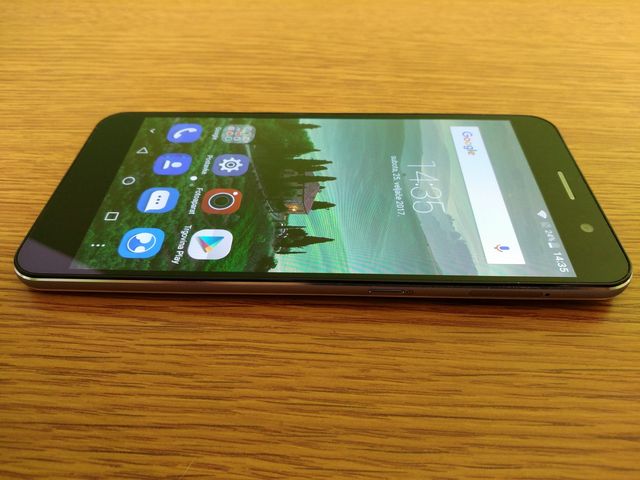 Let’s begin the review with a complete packaging. ZTE Blade A910 is delivered in a fairly simple cardboard box with a minimum of inscriptions on it: a minimalistic device image, a pair of logos and a list of key features. It looks, of course, is simple, but not worse than most analogues. Inside the standard set. Immediately see the smartphone itself, power supply, microUSB cable, a pair of paper, a paper clip, as well as a wired headset. Headphones with the ZTE logo, but you can use them, unless there is another option. 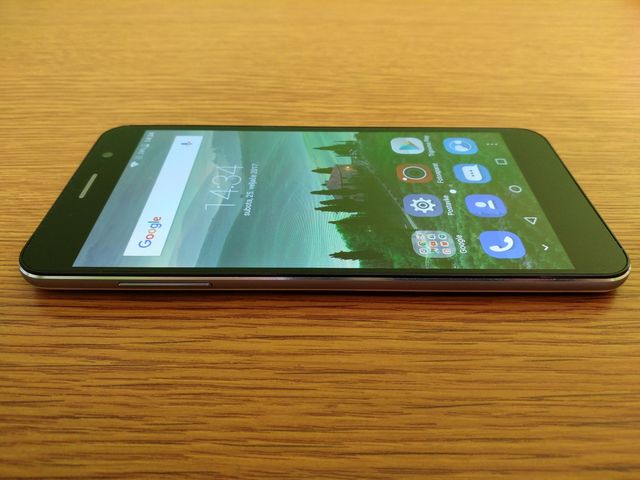 Something of its manufacturer in the Blade A910 is not added, in addition to the logo. The front of the device strongly resembles the iPhone 6S, and behind it the decorative inserts under the antennas. Design is not bad, just a feeling that I’ve already seen this. If you look at the smartphone from afar, it seems that it is completely metallic. In fact, no. At close examination it appears, that from a metal in it only a frame. The lid is plastic, which the manufacturer tried to disguise as aluminum, added even plastic strips. Despite the fact that the body is not all-metal, there are no claims to the assembly. The smartphone is nice in the hand, nothing creaks, the design is pretty sturdy thanks to the frame.

The front part without frills: a large display (in a white version a little noticeable black bar around), front camera, sensors and a slot of the spoken speaker. ZTE Blade A910 remained without the usual touch buttons – displayed on the screen. 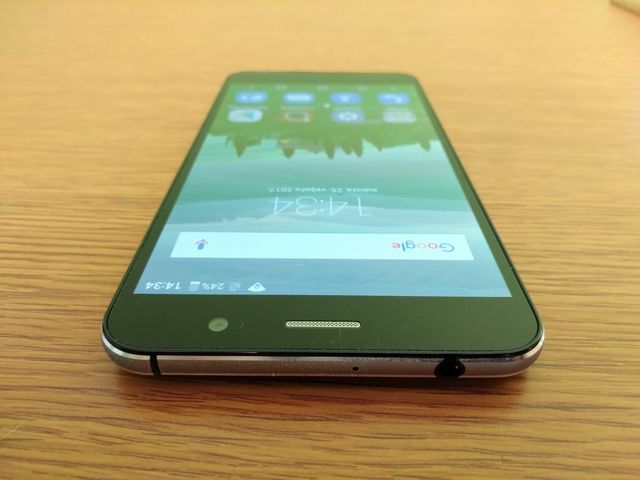 The power button, slightly protruding from the case, was placed on the right end by the standard. Here, just above, there is a tray. It is made combo – it can work with two SIM cards such as nano or one SIM and microSD (memory card).

The button for adjusting the volume of the manufacturer sent to the left side, which is not very convenient – most smartphones have a swing on the right, next to the power button.

A headphone jack (3.5 mm) and a talking microphone are placed on the top side.

The bottom has two grids, one of which hides the external speaker. Here, between the grilles, there is a plug for recharging (micro-USB).

On the back of the main camera is visible, which is framed by a silver edging and slightly protrudes from the case. Below there is a flash and a fingerprint scanner, and immediately behind them is the ZTE logo. 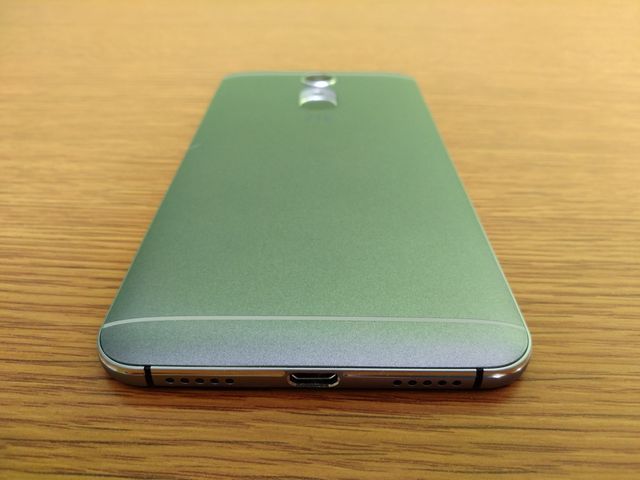 The smartphone turned out to be quite large, but problems with its use will not arise even for users with small hands. ZTE Blade A910 perfectly lays in the hand, ideally under the thumb is the power button, under the index or middle – the volume rocker. In addition, the model was very light because of the use of plastic – 135 grams, and the dimensions are acceptable – 75x152x6.9 mm. And yet at this price, you want more metal in the design.

ZTE Blade A910, like an overwhelming number of budget smartphones, received a processor from MediaTek – MT6735. We have 4 cores and a clock frequency of 1.3 GHz. For the schedule is responsible Mali-T720, familiar to many cheap devices. In AnTuTu smartphone is gaining about 33000 points, which is already becoming the minimum for a smartphone in 2017. 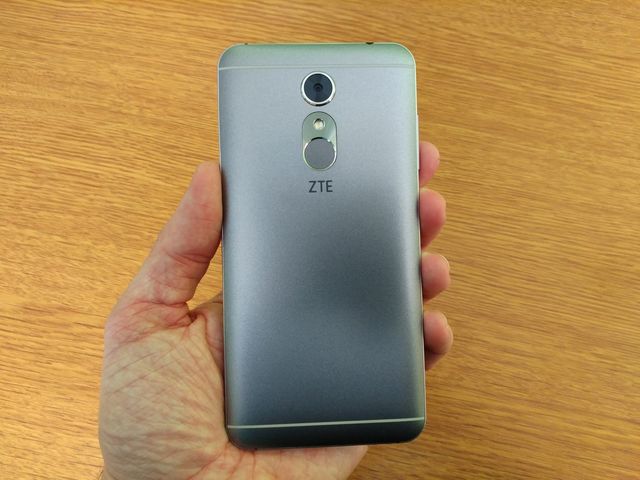 In terms of speed, the smartphone shows itself well. There are no problems with working with programs, running videos and browsing the Internet. Games, albeit not on the maximum graphics settings, but work, in large part due to the small display resolution. At serious loads it is noticeably heated, but not to critical values.

RAM 2 GB, which has also become the minimum volume. The permanent memory is 16 GB, but the capacity can be expanded by a memory card (maximum – 128 GB). In the daily use of problems with performance does not arise. Everything works smoothly, and the smartphone can think only when opening resource-intensive applications.

What you really want to call a disadvantage of the ZTE Blade A910 is its battery. The capacity is only 2540 mAh, which is small, given the large screen, even if not FullHD, and other functions. True, the manufacturer took care of optimizing energy consumption, so with moderate loads you can count on the whole day of work. For more, unfortunately, you can not count. For an hour of the game, about 20% is spent, in the video playback mode, the smartphone will last about 9 hours.

We already have a bunch of cameras typical for the budget class. The main module is installed on 13 megapixels, but how much they are “honest” is hard to say. The camera looks like it does good shots, but it focuses very slowly. A good frame, if adapted, can be obtained in clear weather or under normal lighting conditions. And it was noticed that often the colors go into other shades. As is usually the case with cameras in budget smartphones, the quality drops as soon as the lighting deteriorates. Immediately appears noise, focusing can not correctly determine the desired object. Naturally, you can write video in FullHD. There is no optical stabilization – the picture turns out to be jerky. 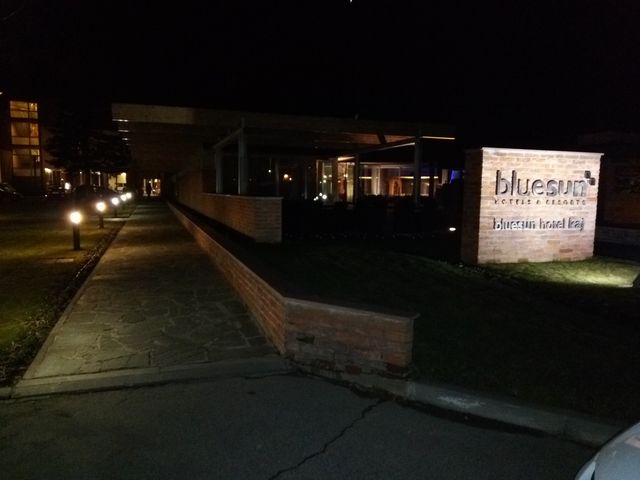 The front camera is quite high quality. Here we have a 8-megapixel module with a wide angle of 88 degrees. If you want, you can make a very good self for social networks, for video communication and in general it is enough. 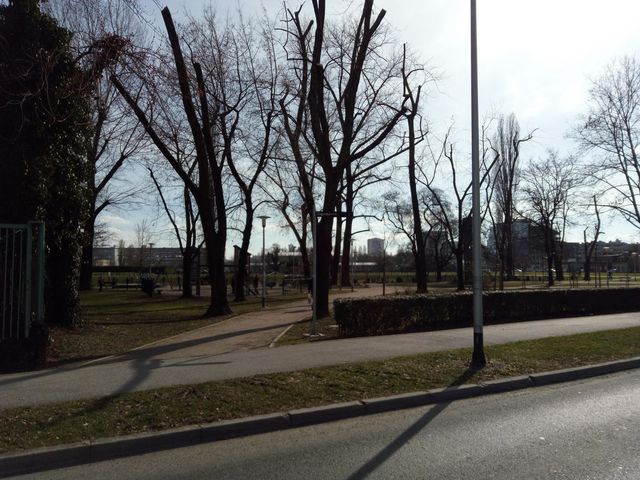 What is the result of the cameras? Not bad, but nothing more. The undemanding users, who need the camera for a tick, will be satisfied. Well, lovers of a good photo ZTE state budget is unlikely to fit. 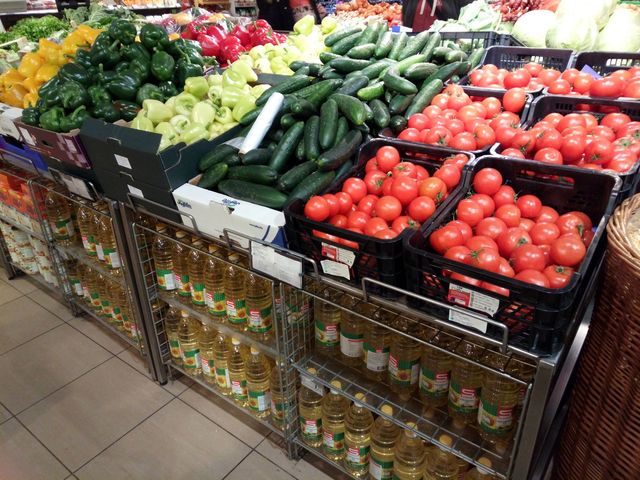 ZTE Blade A910 received a large display at 5.5, the resolution is only HD, which is somewhat frustrating, given not so much the budget value. But the matrix Super AMOLED, which boasts a deep black color and low power consumption. The screen took up approximately 80% of the front surface, which positively affected the dimensions of the device. In general, there are no claims to the quality of the display: normal contrast, good color rendering, sufficient clarity. A huge plus is the MiraVision system, which allows you to customize the color saturation yourself.

The screen covers a protective glass of unknown origin, an oleophobic coating of an average level. The air gap is absent, which provides excellent viewing angles. The sensor is sensitive, at the same time the ZTE Blade A910 screen recognizes up to 10 touches. The reserve of brightness is not bad. The display can be called average – after all for the same money that asks ZTE, you can find a lot of good devices. If you are not one of those who are looking at the screen, trying to find pixels, then, of course, you will be satisfied.

For communication, the smartphone has everything a modern user needs. If you do not need to expand the memory, you can use two SIM-cards. Naturally, there is support for LTE, which works well in Russia. Installed a good Wi-Fi module, confidently holding the network, even at a decent distance from the access point. Did not stay budget and without Bluetooth 4.1.

Supports and popular navigation systems: GPS and GLONASS. Satellites are bright, but there are times when the connection breaks. The reason for this is the processor from MediaTek, which does not differ in stable work with navigation.

ZTE Blade A910 got a fairly loud main speaker, but at the maximum it starts to croak. Nice and conversational speaker – even in noisy places perfectly audible interlocutor. If you use high-quality headphones, then there are no claims to sound, although the full potential will not reveal them.

As the operating system is used Android Marshmallow, still relevant, which will remain for a long time. The manufacturer decided to add something of its own to the system, rolling over the branded shell. The interface looks nice, new icons for applications have been added, additional features have appeared. The shell offers a more flexible appearance settings, which, of course, will not give “pure” Android.

I was pleased with the gesture management system, of which there are many on the ZTE Blade A910. For example, by drawing a certain gesture on the screen, the user immediately gets to the player or other application. A simple shake of the smartphone activates a flashlight or camera. It is equally interesting to turn off the alarm by turning the smartphone screens down. And this is not all the additional features.

There are no complaints about the interface: everything is smooth, applications open with lightning speed. And indeed, ZTE always had problems with this. Of course, having slaughtered the memory, you can see small friezes, but simply cleaning the running processes causes the device to return to normal state.

We have two most common sensors: illumination and approximation. Also, the device received a fingerprint scanner, although it’s not perfect. The main drawback is that, before it is used, you need to unlock the screen. That is, the manufacturer forces the user to perform unnecessary action. Although it works fast enough, it can perform other functions, for example, play the role of the button “Home” or start the camera by double-clicking.

Advantages and disadvantages ZTE Blade A910:

Now I propose to go for alternatives up to $200. Approximately for the same amount you can buy a more productive Xiaomi Redmi 4 Prime. In it, and the processor is more powerful, and more memory, and the battery is more tenacious. You can also consider the option from Meizu – the recent M5. It looks good, and the performance is certainly not lower. And finally, ASUS ZenFone 3 Max ZC520TL with a capacious battery.

Our review ZTE Blade A910

ZTE Blade A910 is not the best budget smartohine – there are representatives and better. Despite this, it will find its buyer. The smartphone is not bad externally, it got a lot of useful functions, a clear display, the saturation of which can be adjusted independently. In addition, a little cheaper since the release. What really does not take to the pluses, so this is the manufacturer’s fault with the fingerprint scanner, as well as the battery.