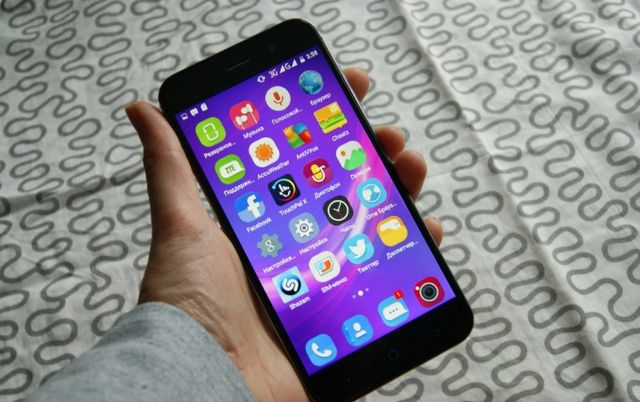 ZTE Blade Z7 does not bring anything new to the lineup ZTE smartphones. Design and construction are identical smartphone ZTE Blade X7. Features are also very similar. And the design is similar to the one that has the ZTE Blade S6 smartphone, respectively, and the lite version of ZTE Blade S6 Lite. This is especially noticeable if you look at the white model ZTE Blade Z7.

And now, some of the fraud, rather, a small, dishonest marketing tricks. What honest, and I was led. When I learned that in the ZTE Blade Z7 declared Camera 16 megapixel, while the price of 14 990 rubles at the start of sales, then seriously think that this would be my next smartphone. Indeed, in this price range are no more smartphones with “real camera 16 MP.” But, as it was with the X7 model, it seems, we were again cheated. The technical characteristics of the ZTE Blade Z7 indicated a camera module used. But we know that he is working on a processor MediaTek MT6735, and the processor hardware supports 13 megapixel camera and below. That is, in the ZTE Blade Z7 uses the camera module with a real resolution of 13 megapixel and 16 megapixel is increased software that is interpolated. The situation is similar in the model ZTE Blade X7, where the camera 8 megapixels with interpolation up to 13 MP.

So if you’ve been paying attention to this smartphone from behind the camera, the “pass by”. Does it make sense to pay more, if at the time of the start of ZTE Blade Z7, ZTE Blade X7 smartphone sales is an order of magnitude cheaper than 11 990 rubles.

If you need a really high-quality camera, you should pay attention to the Nubia Z9 mini. It costs only a little more expensive, but it is in camera module Sony IMX234 Exmor RS, which really makes the pictures of 16 million pixels.

According to the specs, the front camera on the ZTE Blade Z7 8 megapixels.

Of course, the moment the camera leaves a bad feeling, but in the rest of the smartphone is quite good: slim body aircraft-grade aluminum, support for two SIM cards work in 4G networks, 2 gigabytes of RAM.

Set can be two SIM cards: one Micro-SIM, the second nano-SIM. Alternatively, you can install a SIM card and a memory card (MicroSD up to 32 GB). Set just two sim card and memory card. 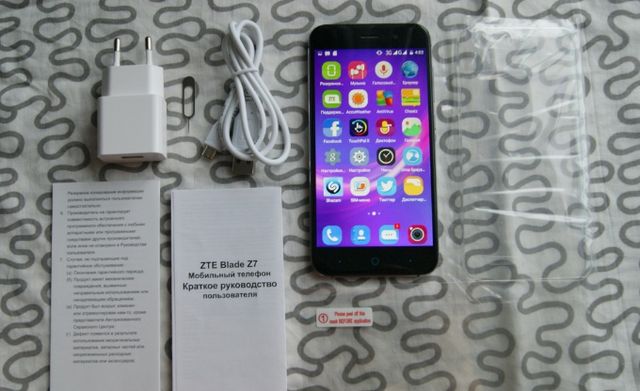 The device sits nice in the hand. Due to its size it can be operated with one hand.

The screen apparatus of a five-inch, 720p resolution, made on IPS technology. Three familiar touch buttons located under the display. Above the screen – the earpiece and camera. There are LED for notifications (located between the camera and speaker).

The screen is bright enough, they can be safely used even in bright weather. However, there is strong distortion when you look at the screen at an angle.

On the reverse side at the bottom – the speaker, and on top – the camera with an LED flash. There is also a microphone for noise cancellation. Almost in the center is the company logo.

On the left is the carriage for SIM cards. Bottom – microUSB connector and a microphone, and on top – the headset jack. Lock buttons and the volume adjustment are located on the right side. 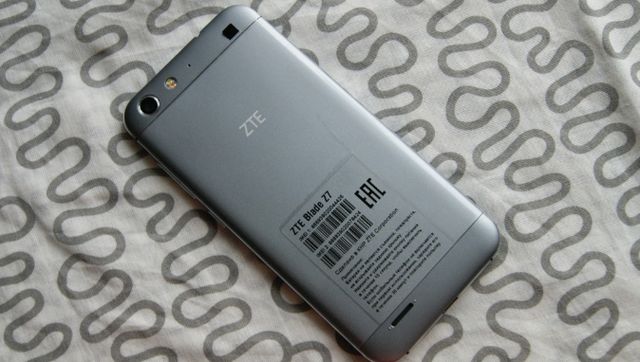 ZTE Blade Z7 supports two SIM cards (Micro-SIM and nano-sim). They are installed in a removable tray. Instead, the nano-SIM, you can insert the memory card. Use simultaneously two SIM cards and microSD not work. It turns out that the manufacturer is slightly disingenuous, calling his product dvuhsimochnik.

When you call us to ask, what kind of SIM card used. In the settings you can select the priority sim card. Communication catches steadily. There 4G support.

Contacts, SMS and dialing does not differ from other smartphones on Android.

The smartphone ZTE Blade Z7 runs on the new Android 5.0.2. In the settings you can see that the model is called the ZTE T663. Build number – DIS_RU_NB158D_P635A20V1.0. As can be seen from the assembly rooms, installed the first version of the firmware, and it is at the moment the newest. Mifavor shell.

At the top of the lowered “curtain” visible alerts. In the quick menu, “pulls” from the top, you can turn on / off wifi, Bluetooth, flashlight, sensor auto rotate, data transmission, and also to change the sound profile.

Settings menu does not differ from other smartphones on the fifth Android. At ZTE Blade series can be interchanged steps left and right touch of a button. This is done by using the settings.

Result AnTuTu Benchmark 6.0 – 30 083 points. Quite a good result for the machine in the middle price range.

When connected to a computer, you can choose several options for the behavior of your smartphone: USB-stick (connect sd card as a flash drive), USB-modem, the MTP or PTP device, only charging a built CD-ROM (for installing drivers).

Consider the setting and photographing modes. 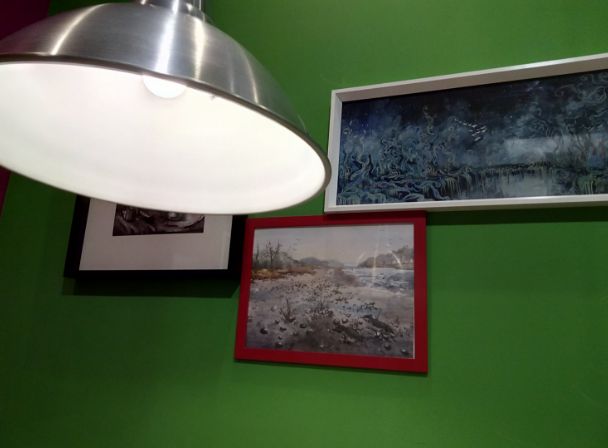 On the right there are icons to activate the HDR, flash, camera switching and auto photo when the gesture appears in the camera hands «V». What I was trying not to show this sign with his hand, the smartphone did not want to be photographed. On the left – arrow to select the Photo Filter. Bottom left to right: switch settings, video recording, photo button, launch the gallery. From above, you can select photographing modes: normal photos, beautiful face, panorama mode, live photos, motion tracking.

There is also a tracking mode of the object. I do not know what it is, but the device works with him is bad – tracking error pop up after a few seconds of use.

There are three tabs in the settings: Common, photos and videos. 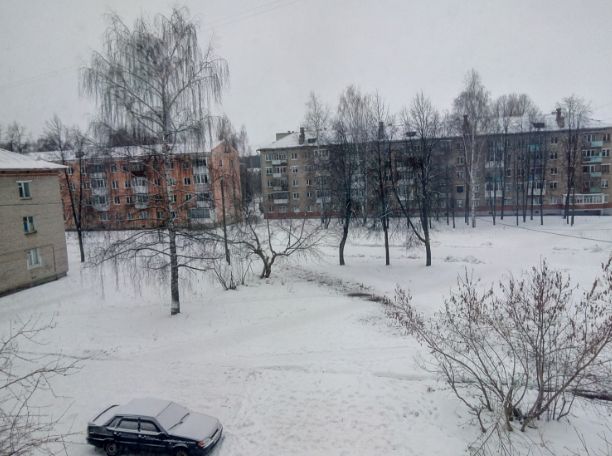 On the street is usually not too sunny day makes the photo quickly. In general photos (landscape, buildings, distant objects) there are loud noises. If you photograph objects at a distance of 2-3 meters, the picture may get blurred (soap).

This makes good close-up, if the camera was 5 or 8 megapixels. But for the 16 megapixel photos are not very good quality.

The camera copes with the glow. The room in the photo there are loud noises. Like a flash. It is bright enough to easily take photos in a room without light, with the focus works well – there is no glow. Outside of it will be of little use if the object is located 10 meters further. The smartphone is trying to pull the photos even without light sources (photo done in the evening when it was dark).

for Stitch. Valid only. First, choose a starting point shooting, press “Start”. When you need to move the device into one of the four sides. Two arrows appear after the beginning of movement: white indicates the current position, and blue – the desired. When they coincide, the smartphone takes a picture. Then we move on. Once complete, click the check box. Maximum is 9 images. I tested this option on several machines and I can say for sure: Z7 quickly glues frames, thereby producing a good panorama.

The front camera is intended only for selfie – focus only on the face. The rest is no different from the 3-5 megapixel cameras from other devices – image quality wishes to be better.

All applications are written, that the main camera has a 15.9 megapixel and 9.4 megapixel front. The manufacturer does not tell what kind of camera module is used. Also not received a reply from circulation in support of the module used and the probability interpolation (resolution enhancement software). As is known, the processor MediaTek MT6735, used in the ZTE Blade Z7, can work with a resolution of 13 megapixel cameras.

Basic camera parameters: the focal length of 3.5, video capture up to 60 frames per second, the angle of 62 degrees.

Front of the camera parameters differ only in the angle, it 71 degrees.

In principle, an excellent camera of ZTE Blade Z7, if it was 8 megapixels. But for the 16 megapixel she obviously rather weak. There are suspicions that the new firmware version of the camera will work better because the machine is very weak software component.

ZTE Blade Z7 uses a non-removable battery capacity of 2200 mAh. The manufacturer says that this phone will last for 450 hours of standby time and 12 hours of talk time.

I was surprised by the consumption of a smartphone – the active use for 2 hours, the discharge was only a few percent. With moderate use of it will be enough for two or three days.

Good inexpensive device, where you can do almost anything you might need modern man – it can be used as a navigator, soap dish or e-book. This smartphone has a low weight (for the five-inch screen), metallic body and a good autonomy. All this makes it stand out from the extensive list of analogues.