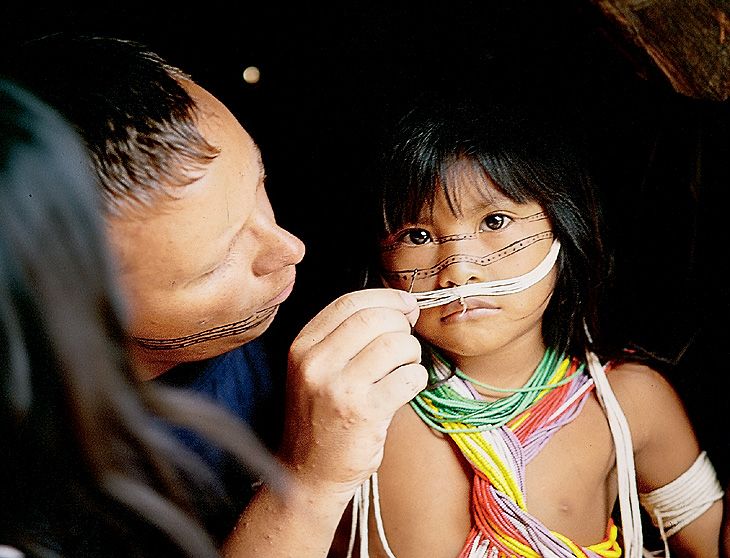 In European culture, people have long ceased to be aware of themselves as part of the whole, and only rely on our own strength. But on the planet has a community living differently – a single organism. As a South American tribe Marubo, which one heart at all. “Around the World” continues the series about the amazing ceremonies and rituals witnessed by the traveler Leonid Kruglov

Territory in the Amazon, where the borders of three countries – Colombia, Peru and Brazil – the locals call the Golden Triangle. There is gold mining and valuable trees. But for me, this place was important for other reasons here, walking down the Javari river, you can get to the wild tribes of Brazilian Indians who are trying to prevent outsiders into their world.

To get there, you need special permission to the Brazilian authorities, which will go through several police cordons. Get it helped me French missionaries. I met with them on the Colombian side, Leticia. Missionaries invited me to take the Indians tribe Marubo medicines. Get to the place it was decided on two boats.

One, “slow”, loaded with medicines. I myself went ahead in the second, the “fast” boat with an interpreter Paolo.

What to do in Colombia

See the National Park “Amakayaku.” In an area of ​​a little less than 3000 km2 stretch of tropical forests and swamps. Here grows the largest water lily in the world – 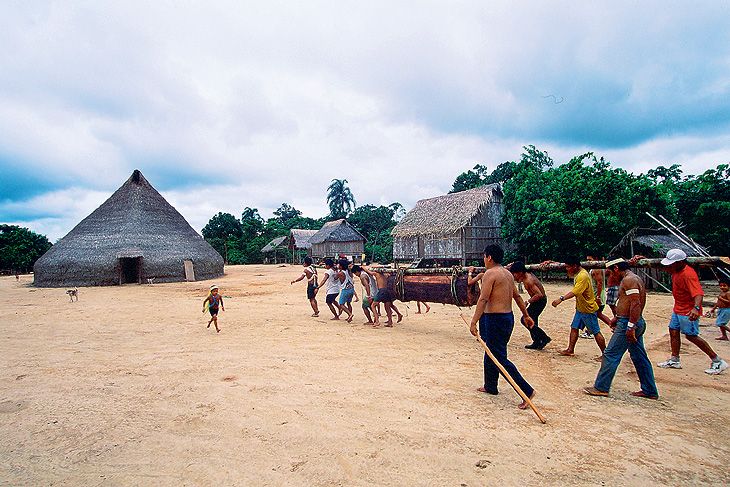 Prior to the first settlement Marubo located right on the shore Javari, we got three days. In a clearing – a small cone-shaped structure around the house height of about 20 meters. Paolo explained to me that all the inhabitants of the village live in the central house – Mulock. From it came out to meet us, about fifty people headed by an elderly man, a priest named Vaymaka. After lengthy negotiations, it allowed us to set up camp on the edge of settlements. We had to wait for the “slow” boat, give medication and leave.

On the fourth day in a village about six in the morning Paolo flew into my tent: the priest wants to see me. Since I first came to Mulock. Inside the circle were hung hammocks. Each tenant your “angle”. In the center of the floor stood utensils c cooked fish, towering mountain of bananas – a bit of common dining table. All this reminded me of a large communal apartment. In the back of the house lay in the hammock and she moaned. Apparently, she had a high fever. Before her stood Vaymaka. Paolo explained that this Peneyva, the daughter of a priest, and he asks her to be cured.

Marubo reach only by boat on the river Javari

I offered my boat to take the girl in Leticia, a missionary center. At the same time, I realized that I remain without means of transportation and communication – radio was needed for those who sailed on a boat, on an emergency meeting with the medical station.

An hour later we sent Peneyvu accompanied by two Indians in the way. And soon the whole tribe gathered in a clearing near Maloqs. Men hoisted on the shoulders of a tree trunk length of about 12 meters and headed into the woods. Women and children followed them.

Vaymaka turned and beckoned to us.

– You gave the most precious thing you have – translated it Paolo.

– Now you feel Marubo, and you should feel Marubo. So you can go with us.

After a while we came to the edge of the forest. Men put a log on the ground, and began to inspect Vaymaka trees around. He came to the massive trunks and embraced them, as if listening. Finally stopped at a tree with purple bark. This was the so-called “Purple Heart”, whose wood is highly prized for density, strength and unusual maroon-purple hue.

Knocking a 20-meter shaft, men cut off a piece of it about four meters long. Because they used axes, the whole process took several hours. Then log tied ropes to brought the trunk. Only in this way it was possible to carry out a massive trophy.

In the village log Maloku brought in and placed in the center of the house on specially harvested timbers. So usually turned into a log drum – ako, as it is known locally. Vaymaka handed the baton to two men. They came to the drum from different sides and began to beat on it. Powerful muffled sound filled the room. Vaymaka sat on the floor in front of Ako and began to whisper something. The rest were scattered about his business. And the drum kept knocking.

Ako drum heavy, besides due to the large diameter of its uncomfortable to hold. Ako to deliver to the village, the Indians used the hit ing reception: drum tied to a long, thin stems. So it can easily pick up a large number of people

That night, I tried in vain to sleep – the drumbeat never ceased for a moment. He broke off suddenly, I even jumped. The clock was six in the morning. Together with Paolo, who also, as it turned out, did not sleep, we headed to the village.

Ako was silent, but the Indians did not sleep. Priest with a satisfied smile handed people clay cup with some drink. Turn and us. As I later learned it was ayoaska tea, which, according to Indian beliefs, helps to communicate with spirits.

– Peneyva healthy – translated the words of the priest Paolo. – Tribe feels it. Do not you feel that she’s all right?

I nodded to offend no one.

Celebration announced Peneyvy recovery continued, and I went to sleep. Woke up late in the afternoon – I woke up again a drum. Alarmed, I went to Maloku. In the drum beat is other men, but the rhythm was the same. Priest sitting on the sidelines and butchered fish.

We sat down beside him and asked, do Peneyve again became ill?

The priest smiled, took my hand and put it to my own chest.

I was stunned: my heart rate coincided with the drum.

– My heart beats as well – the priest continued. – And his (Vaymaka pointed Paolo), and we all hearts beat so. Ako helps us to live. Ako and himself alive. Former ako died, and to establish a new, need to wait for an important event for the tribe: good or bad. With Peneyvoy disaster struck, and it was a sign that it’s time for a new ako. As man can not live without a heart, and Marubo – without ako.

Marubo contact with Europeans, not very willingly. But of all the tribes of Brazilian Indians are the least aggressive. At least skinned aliens meet without machines

Every day, people around the drum replaced, he did not stop that for a minute. Tribe has adapted to the new sound of the drum. Moreover, Marubo feel relaxed and, as I thought, securely, when they heard the sound of it.

So ako will sound the next few months. From the constant blows compacted wood, and the sound will soon be not loud enough. For Marubo it will mean the obvious – ako died and can no longer serve as a tribe. The drum will be taken to the forest and throw in a thicket. In comes the tribe, according to Vaymaki, unbearable silence. The one that I heard when I came to the village. But to make the next drum tribe will wait for a special occasion. New ako again ask the rhythm of tribal life and disrupt the oppressive silence.

A few days later came “slow” boat. I radioed to the missionary point. I was informed that in Leticia Peneyva arrived almost healthy. Of course, I thought it was just a coincidence, but leaving, I caught myself on the fact that continually verifies the pulse with the beats of the drum. And the unity of these rhythms are no longer seemed random.