Samsung Gear S2: from the classics to the smart watches 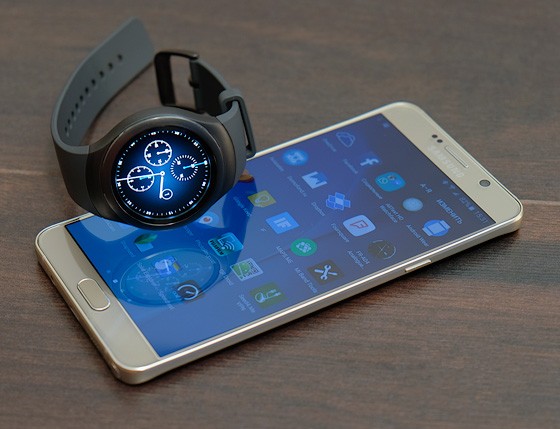 The first “smart” watches appeared long before the beginning of the two thousandth, it is enough to recall familiar to many of us from childhood Montana, where there were different tunes, alarm clock, stopwatch, and even lights, as well as watches of other brands. However, for a long time “smart watch” does not develop, remaining very specialized and incomprehensible to most people accessory. So far in 2013, it did not take the matter for large companies. Within just two years, came a lot of different “smart” watches, from very simple to extremely complex.

Some watches are ugly, simple in appearance but with a great set of features. Others, however, impressed by its design, high cost performance, but provoked the poverty functions. Others seemed to have been successful both in appearance and in terms of opportunities, but when we look at no interest, too many things have been done in a superficial or poorly thought out. In short, during this time, almost every manufacturer of “smart” hours some extent compromised in search of one, the right direction.

Samsung has been one of the first who began to issue “smart” watches and to develop this market in the two thousandth. So, in 2013, it was presented with the Galaxy Gear largest AMOLED-display, a powerful processor and a built-in camera. The first attempt at writing for the company was, as is often the case, the desire to understand what users need all of these accessories. Galaxy Gear were quite large and more like addition to smartphones, rather than a separate accessory. But the beginning of the development of “smart” watches in the company was laid. 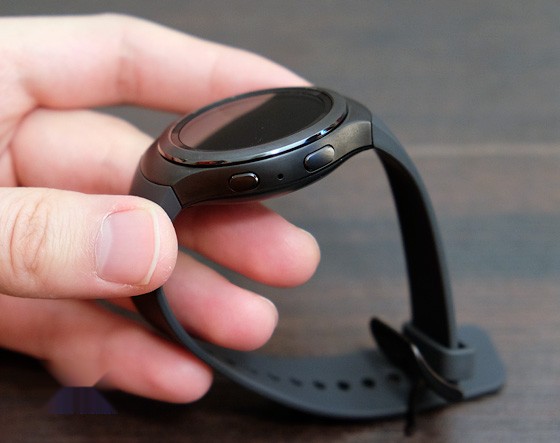 Second watch, Samsung Gear 2, developed the ideas of the Galaxy Gear. Body has become more compact and neater accessory transferred to another platform (Tizen instead of Android Wear), there were a variety of interchangeable straps, and the watch become more autonomous and less attached to the smartphone. Then there were similar overall Samsung Gear Live and quite unlike Samsung Gear S.

This watch company embodies its desire to make an accessory, as opposed to all the previous models, the more expensive and premium. There were interchangeable straps, including options straps with crystals Swarowski, and clock appearance made them more like a stylish futuristic terminal, rather than classical or usual in our understanding of “smart” watches.

Some would say that the company is moving all the time in the wrong direction, but on the other hand, knows whether at least one manufacturer in the right direction in the segment of smart watches? Personally, I’m not sure. If we trace the history of this small line of Gear inside Samsung, then you will understand that each model has a certain zest, each company tried to apply new ideas and then to see how they will be perceived by users. And the information collected in full in handy when creating Samsung Gear S2 – it’s really universal “smart” watches. With quality design at the intersection of technological devices and classic watch with a round dial. They like both fans of the classics, and those who prefer modern futuristic accessories. With several types of controls: in Gear S2 can use the touch screen or a rotating bezel, especially convenient if you like the mechanical control system. With well thought-out set of features and capabilities of the classical role of clock dials with simple systems to count steps, distance, heart rate measurement and heart rate, and more. 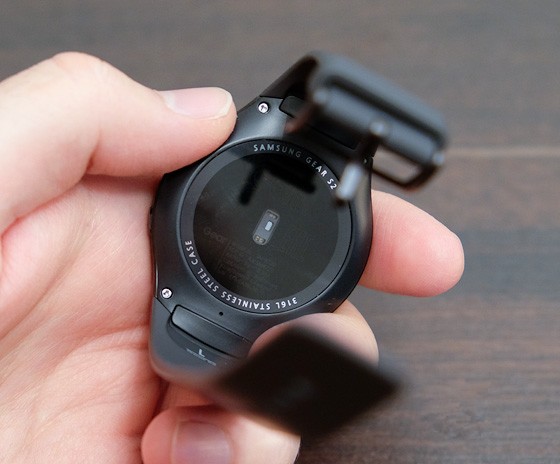 There are two versions of Samsung Gear S2: one for people who prefer the classic design of the watch (Gear S2 Classic), the other for those who are more inclined to the design of “smart” watches, simpler and slightly less severe, if you let me put it that way (Gear S2). The first version of the classic, the most similar to the familiar to all of us watch from well-known manufacturers. It uses the bezel with the risks on the edge, and a leather strap. Samsung Gear S2 Classic virtually indistinguishable from the good mechanical watch, especially if you choose some classic dial, and this is their main advantage over most other “smart” watches on the market. These watches are appropriate with a jacket, with a suit, an expensive briefcase, and other attributes of the business appearance. The company did not slukavili by adding their name to the prefix Classic.

The second option, simply Samsung Gear S2 – has no bezel textured treatment perimeter and silicone straps. Complete with their two hours – shorter (S) and a longer (L). To change the strap do not need to make any serious effort or the use of additional tools, it is enough to unfasten it with the keys fasteners. This actually mount the strap to the watch case is very sturdy and does not cause any problems. For a simple version Gear S2, Samsung has produced not only silicone straps in different sizes and colors, but also stylish exclusive options, developed together with Alessandro Mendini, the famous Italian architect and designer. Also watch has a pre-dial, made in the design, developed together with Mendini.

The clock itself in both versions are made of solid stainless steel (316L) and are fully protected against dust and moisture in the body, are certified according to the standard IP68. The screen is covered by tempered glass and not exposed to damage and scratches.

I especially want to focus on the management of the clock. The fact that Samsung has chosen the most correct (in my opinion) solution, giving users two hours of their management options: via the touch screen or mechanical, with a rotating bezel and the two buttons on the body. In the second case, only the need to touch the screen – the steps of selecting applications. The rest of the menu to move, move within the program, enter the main screen are utilized only bezel and buttons. This method of control will appeal to those who are accustomed to the mechanical elements and will be very useful absolutely for all users during the winter, when it’s trite does not want to remove his hands from the gloves to perform on your smartphone or hours for some act. In the case of Samsung Gear S2 accessories can manage and gloves, using the bezel. 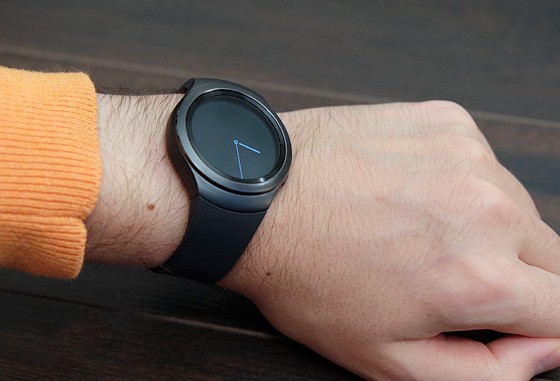 Now understand, why do you can use the “smart” watches, the example of Samsung Gear S2.

The first option – Clock as a complement to a smartphone. Wearing Gear S2 on the arm and connected to your smartphone (and this is not necessarily a smartphone from Samsung, the main requirement – the device on OS Android), you get a handy tool to keep track of new messages, notifications, and other things. Now that you have a new email, text message notification WhatsApp and other networks, you cannot take out of his pocket a smartphone, and simply look at the screen and see the hours necessary messages. This large messages can scroll using the touch screen or by rotating the bezel – convenient! The same with calls. If earlier so as not to miss an important call, you had to keep on your phone or smartphone maximum volume, but now, with the connected Gear S2, you will not miss a call, even if it is exposed to silent mode. After the clock during an incoming call vibrate on your wrist and you soon realize that you call. 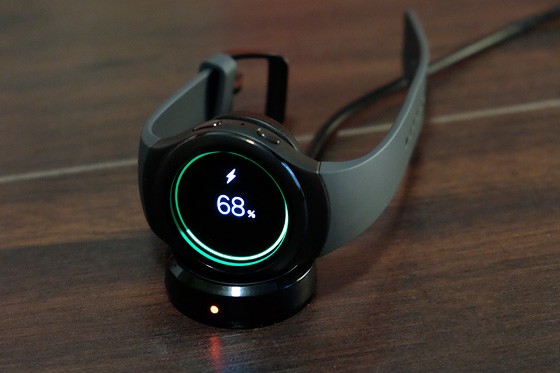 The second option – a compact assistant to monitor their health. Yes, perhaps it is too loud, but Gear S2 really allow to obtain additional information about your body and, therefore, keep it in shape. The clock is passed steps and distance, and calories burned and allows to fix the amount of alcohol consumed per day cups of coffee and glasses of water. In the future, all collected for days, weeks, months and years, the information is saved in Samsung S Health and is available for analysis and study in a convenient form, in the form of graphs and reports. In addition, the application from time to time give you advice. And with the help of Gear S2 can measure heart rate, and store data in multiple profiles: rest, after exercise, before exercise, during the period of excitement, wonder and so on. Subsequently, this data is also stored in the S Health.

The third option of using Samsung Gear S2 – mixed, and perhaps it was he who would be the most popular among users. This is when the “smart” watch and serve as a tool for notifications at work, at home and everywhere, and as an assistant in sports, and just to keep track of physical activities, as well as universal gadgets. After all, Gear S2 can install additional applications from other dials with various useful information and news services to sport utilities to in a playful way to keep a record of exercises done for the day, eaten food and other things, calculators and other small tools and even games.

By the way, on the dials. For Samsung Gear S2 has a huge number of additional dials, from classical, resemble mechanical watches, to futuristic various dials or variants with additional information. 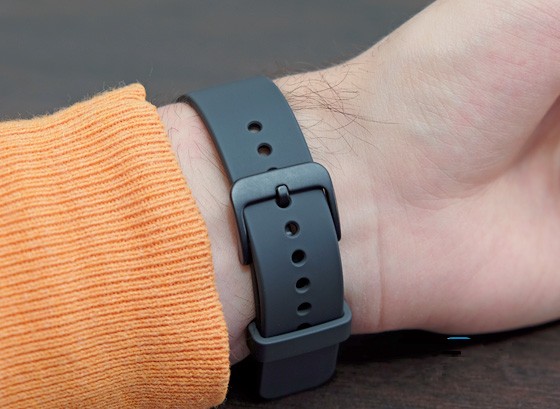 How to use this watch I personally? I confess that in my case the primary is the first script. To me, Samsung Gear S2 – a handy tool for notification and an opportunity not to miss calls, which without “smart” watch I sometimes miss. First of all, I like the fact that thanks to the Gear S2 is not necessary to take out of his pocket smart phone every time I get a new notice Telegram or WhatApp. I’m just looking at the clock screen, I read the message and decides whether to answer it. If detailed response is required, the rotation of the bezel on the Gear S2 choose a short phrase from the template options and send it with the hours, and if necessary, pull out your smartphone and write a text. Now, when the window of zero degrees, and the street is not the summer, the convenience of this scenario can not be overestimated. In many situations where before I had to get smart and tinker with it in the cold, I now confine flick of the wrist and skimming of information from the screen Gear S2 or management with the same: reading notifications and SMS, flipping through the music tracks on your phone, calendar (very convenient to do it on-screen clock, oddly enough) and, of course, time. After all, Samsung Gear S2 – first of all cool watch with a very good opportunity to design and, as in any other hour, just watching them with time.