ROUND SMARTWATCHES FROM SAMSUNG

South Korean technology giant has long been accused of copying its main competitor – Apple. In addition, the manufacturer is not only lazy scolded for the widespread use of plastic, even in premium models. However, in 2015 Samsung corrected by releasing GALAXY S6 and S6 edge, and now, it seems, the company decided to go ahead and prepare a smart watch with a round screen like that and ask for a lot of users.

Samsung has announced the possibility of early access to tools for developers interested in creating applications for smart hours Samsung. This notification is accompanied by the caption “get ready for the Gear» teaser and display the gadget of the future, which is clearly get round screen. The market is already filled with devices with circular screens – Moto 360 (review), LG G Watch R (review), Huawei Watch, – and Samsung obviously will not be the first on the market. However, there are some potential device.

In the new product is expected to be used a special mechanism of interaction with the clock. Samsung has two patents: one describes the rotating element around the perimeter of the dial, and the second describes the management of gestures. It is no secret that the inconvenience of managing such a clock is mainly in the need to use touchscreen menu on a very small screen, and the implementation of these patents will allow virtually eliminate contact directly with the screen. 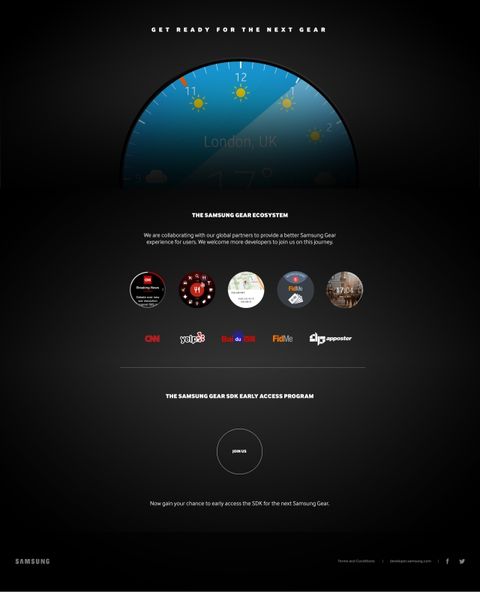 Making certain movements hand / fingers in front of screens, the user moves through the menu, confirms the selection, and so on. D. An interesting and implementation of broadcast information to other hours (connected to) devices. For example, raising a fist to the camera and then throwing arm forward and opened his hand (gesture “pick up and throw”), you will pass the image to watch on TV / monitor / laptop. The rotating mechanism is useful for navigating the menus watches.

It is not known whether it will be implemented in all first-generation smart round-hours, but the presence of these documents suggests that we are waiting for, at least, non-standard solution. The main thing is that all innovations are user-friendly and high quality work, and not, as is the case with some of the achievements when consumers are selling technology for technology’s sake.
Unfortunately, the unique features that Samsung may give your device, determine their work on a proprietary system – as is the case with Gear S, it almost certainly will Tizen. That is, the development of the platform and the number of applications will depend entirely on from Samsung, organizes various support developers, as well as the number of users device. Unfortunately, the date of the announcement is still unknown.