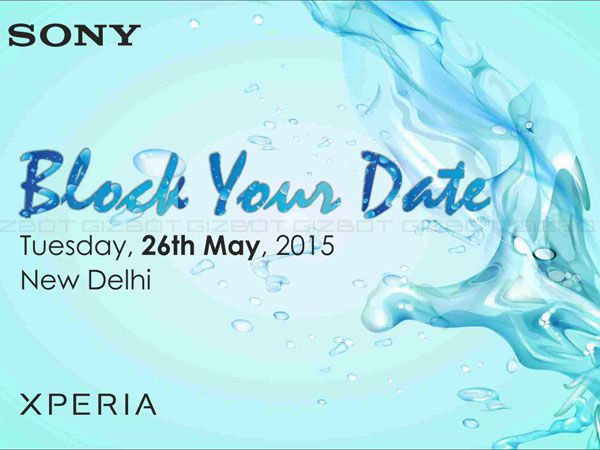 The Japanese company Sony recently officially unveiled the flagship Xperia Z4, which technically is not inferior to current flagship 2015, but due to too few changes, the device will remain exclusive to the Japanese market.  And now, Sony calls circle calendars on 26 May.

The announcement will take place on May 26 in India. Invitation Sony can not be called a revelation – only the date of the event, so the place. The image shows the water which is not surprising, as an important feature of many devices the company is precisely the protection of water. It is expected that this presentation will be shown flagship smartphone for the international market.

Among the options is a question of Xony Xperia Z3 + – in fact, it is the same unit as the Xperia Z4, which was evident from the official company records. Exceptionally rebranding, nothing more. That seems strange need for a separate announcement, though rather atypical venue justify such a move.

However, the Japanese can cook and much more significant surprise – before it became known about the work of the Xperia Z4 Compact and Z4 Ultra. Starting the increase and decrease of the flagship version, which can be almost successful main unit, it is worthy of a separate announcement. However, it can happen and a real gift for fans of the brand in the form of Xperia P2 – a smartphone with flagship features in a compact package, with a capacious battery and the revival of stylish solutions in the form of a transparent illuminated area of the body. Or are we still see futuristic glass unit?

To find out what exactly will amaze Sony, we will very soon – wait is just over a week. In the meantime, one can only guess how the Japanese will fight for the smartphone market, which in recent years, the company does not feel very confident.