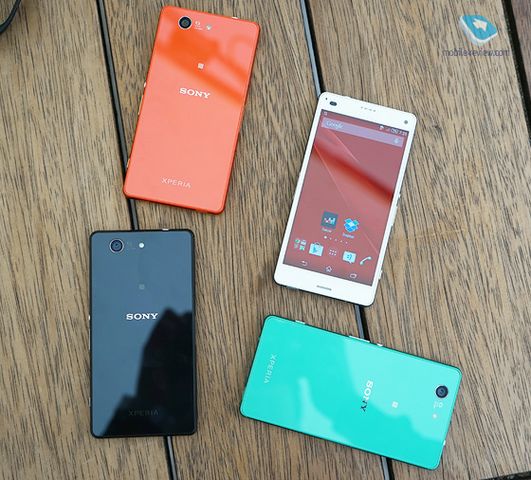 Sony Xperia Z3 Compact – the ends of the polymer support with PS4, as well as at the flagship, interesting colored casing. Unlike the first “compact”, is not simply to reduce senior smartphone design seriously changed …

To begin, I recommend to watch the video immediately remind you that all the innovations we have removed Sony detailed and long overview videos, you can see them at the beginning of each article – if you do not have enough information in the text version, be sure to watch videos.

We came with our colleagues on the first night dispute about Sony Xperia Z3 Compact – remember, the first representative of a compact family appeared on the market for quite some time, selling well in its segment is a popular device. Members captivating that it is a miniature flagship with a good price, while there are no savings in materials and stuffing.

By the second “compact” personally I have some questions. Firstly, the frame is made at the ends of the polymer. That is to say, not of metal, for many it will be obvious disadvantage. Secondly, there is an interesting optical effect: first it seems that the frame is concave, in fact, it is convex. Thirdly, the material is pleasant to the touch. Finally, the device has become more youth. Or not? 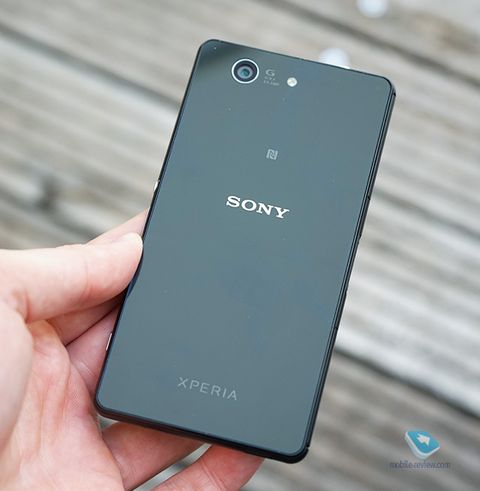 There is rather a question to you, my friends. What do you think about Sony Xperia Z3 Compact? I have an ambivalent opinion – the company clearly wanted to make a fashion smartphone, some accessory for those who appreciate stylish stuff. Just look at the selection of colors for the body: it is an acid, but that acid is now in the trend. Surely the girls will be delighted, as were delighted with the Compact lime color of the first generation. On the one hand, enhancement, and pay attention to the color, but on the other hand, there are nuances. I love how smart looks from the front. Frames have tried to remove, the ends of the polymer rough, and the unit as a whole is better in the hand, it is easier to get it out of his pocket. Well done button, and, despite its compactness, the left button of the camera.Like the flagship, is rounded at the ends of the insert. Neat plug 3.5mm plug unprotected supports all branded original accessories for this pinouts, the unit is protected according to IP68.

It is a pity that the summer was over and selling all Z3 appear in autumn, Sony Xperia Z3 Compact would look great anywhere on the beach. Although, soon after the winter holidays, and many fly to the warm countries. So, do not forget about this little smartphone.

Diagonal IPS-display – 4.6 inches, resolution – 1280 x 720 dpi, all with good brightness, let’s see what the screen will be in serial samples.

All devices line Z3 similar characteristics, so I’ll repeat this paragraph in all at a glance. Processor is used 801ac c 2.5 GHz, Adreno 330 graphics card, 3 GB of RAM, with Sony Xperia Z3 Compact 2 GB of RAM, but there are more and do not need diagonal display less.Installed 16 GB of memory, you can use microSD, supports cards with capacity up to 128 GB. All devices work very quickly, this also applies to E3. Installed Android 4.4.4, but the update to the latest version, of course, will be. Used branded wallpapers, redesigned icons, widget clock has been changed, the numbers of hours became thicker – or rather, became thicker font, minutes remained unchanged. How to change the software at the time of exit devices on the market, we’ll see. 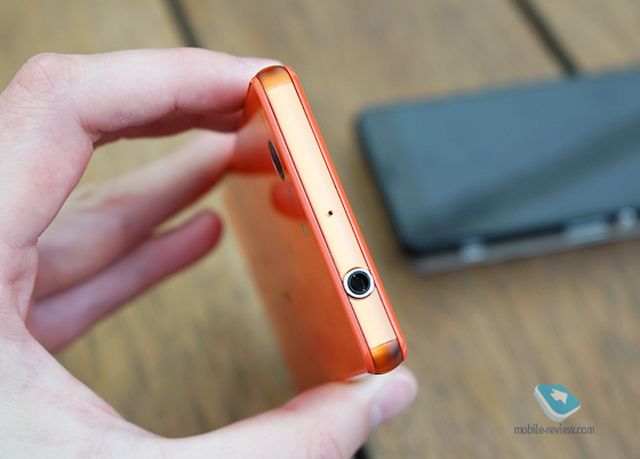 Wireless interfaces are typical, it is Bluetooth, Wi-Fi, NFC. Used pyatipinovy ​​connector as in Z2, it supports all the new accessories that require power from the gadget – a microphone, headset with noise canceling. Probably, there will be other things – for example, headphones with sound support Hi-Res. Magnetic foot at the end allows you to charge Z3 without a connector microUSB, if you get tired of the plug, it is recommended to buy a docking station. By the way, supplied with all the Z3 will remove the headset, you have to buy it separately.

The smartphone uses the battery capacity of 2600 mAh, while the promise of up to two days without even mode Stamina, charging cable, you can use any microUSB.

20 MP camera, front – 2 MP, there are a number of new effects, for example, in the air you can draw something like graffiti, drawing hangs in the air and become three-dimensional, you can hold the camera at different angles and examine the resulting pattern. It’s also very, very unusual. There is a video recording of what is happening on the screen, like the author of the review of applications, games for Android, there is a broadcast-online on YouTube. There are other effects, see details in the video at the beginning of this article. The quality of images, as the company says, has not changed or got better.

In November this year will be a very interesting feature for the whole family Z3 – called Remote Play. Firmware will be released for the PS4, will feature in the Z3 Compact, and what will happen? Here’s what: a smartphone or tablet can connect via Wi-Fi to the console and use the device’s screen to play with a joystick DualShock 4. ceases to be a touch display, the image is transferred back to the set-top box, if clarification on the fingers, Z3 Compact transformed into a miniature TV. Joystick is a special holder, there is possible to put a smartphone or tablet. While this will only work within a home Wi-Fi network, but the promise to expand the opportunities – for example, I might include in Berlin using Z3 console, run BF4, put the smartphone in a joystick and play quietly for an hour before going to bed. That’s just the case with the Sony Xperia Z3 Compact is whether you want to do it, given the size of the display.

Yes, Z2 such functionality will not. 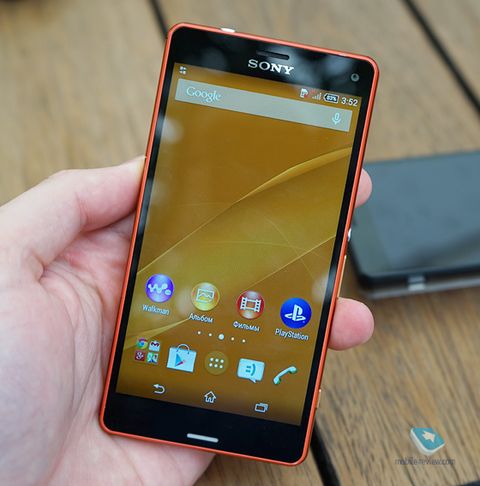 Characteristics as the flagship, except RAM, look quite different – except for the white and black version, there are two colors, created specifically for the Sony Xperia Z3 Compact. I do not know how to relate to the device, if Z3 love without reservation, the compact version, seen, just not for me – it’s for those who love bright things. Although, if the green for you – it’s too much, you can safely buy a black or white version. In Sony’s habit of not voicing the main argument, that is the price, but the price tag may well be the same as the old “CD.”This means that on the shelves will be the next hit in its segment – for image charge anything like that I can not remember. But there is also a camera on the flagship, and support Remote Play, and all sorts of interesting pieces associated with sound.