Somewhere deep at the bottom of the Pacific Ocean is a small town of Bikini Bottom, where live fish, crabs, whales, octopus, snails, starfish, as well as protein and yellow sponge named Bob. They, and other inhabitants of the ocean floor, coexist quite peacefully, chewing at the diner “Crusty Crab” delicious CrabsBurgers. But when disappears legendary recipe Bikini Bottom threatens to get caught up in the chaos. Unless SpongeBob friends will not be able to find it …

SpongeBob again decided to conquer the big screen full meter, this time with the help of director Paul Tibbitt, is already working on the original animated series. To create a “Sponge Bob: Life on the land” had a hand and his creator Steven Hillenbёrg. So fans often very strange, but always amusing adventures of yellow sponges, do not worry about the fact that their favorite story transformed beyond recognition, but the moment she is still able to surprise.

Familiar to many of us here are the characters themselves. SpongeBob also has all terribly naive character and chudacheskim laugh, not too smart, frankly foolish, but brave and has a big heart. Patrick every time impresses with its infinite idiocy, Mr. Krabs dreams of money, Sandy is the smartest of them all, and Squidward still melancholic, but still willing to go to save Bikini Bottom from the apocalypse. Can not do the abduction of the legendary recipe krabsburgera without Plankton, Mr. Krabs eternal rival. And then it gets into the hands of Sponge Bob, who because of his boundless optimism is trying to re-teach the little villain and his co-operate in such troubled times, which, of course, meets resistance from the latter. 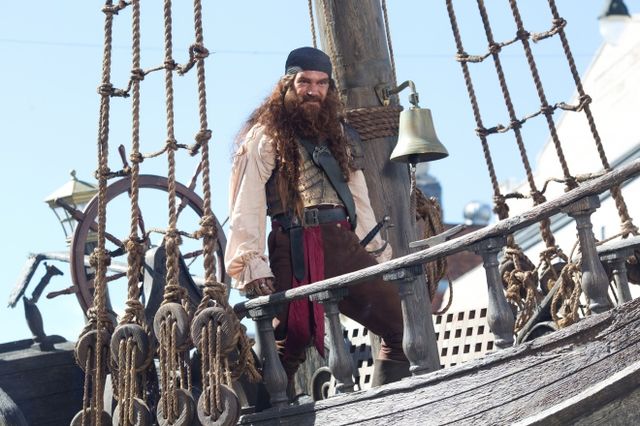 In this story happened as the pirate Blackbeard Burgernoy by Antonio Banderas, who decided to rewrite history for themselves Bikini Bottom. But does he have a chance to stand against such friends?

In a cameo here agreed to play the legendary guitarist Slash, which can be seen in the trailer. He recently admitted that he looks quite a lot of cartoons and loves the animated series “SpongeBob SquarePants.”

Despite the title of the movie, most of the time the audience will hold with painted characters, because they are chosen on the land only at the end for a decisive battle with the pirate. Which, incidentally, is good, because in the real world too familiar characters look very strange, especially when transformed into superheroes. They are much nicer to look at a traditional hand-drawn, and a transformation in the end is just enough to have time to laugh at their new appearance, but that it does not become boring. 3D got enough fit to justify their existence, especially good in it look some things on land. 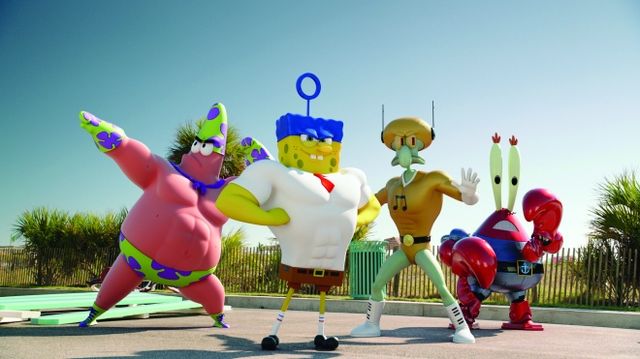 And, of course, the creators have taken care of the most important part of the history of the adventures of Sponge Bob – on the corporate, unusual, sometimes disconcerting, but traditionally merry humor, understandable and acceptable for both adults and children. What does not only try to raise the audience mood: and dolphins, guarding the universe, and most amusing pristavuchimi gulls who love to sing, and temporary abandonment of the boring sense. Cartoon, not paying attention to the conventions, just follow my rule “than the country, the better”, because in the end it is only important to the hall when viewing audience laughter sounded sincere.

Wherever had to go to the land, in the future or the past, and with whoever happened to fight there, SpongeBob and his company will not rest until their hometown will not be satiated security again chew their CrabsBurgers.