Star Wars Rebels: Long ago, in a galaxy far far away … 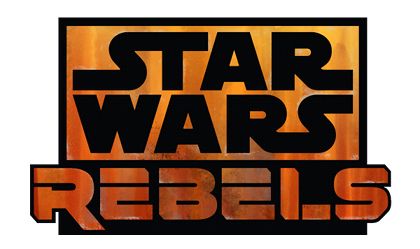 Studio Lucasfilm and Disney XD channel invites viewers to go to the wonderful world of the most famous space saga. Action of the new animated series “Star Wars: The Rebels» (Star Wars Rebels) will develop 14 years after the events of “Revenge of the Sith” and five years before “A New Hope.”

“Order 66”, powered by the Supreme Chancellor Palpatine, provoked mass extermination declared traitors to the Republic of the Jedi. A small group of survivors of the Order of ministers joined the Rebel Alliance, which becomes the last hope of the inhabitants of the galaxy in the fight against the Empire. JediKeinan Dzharrus, young swindler Ezra Bridger thug Zeb Orellios, warrior Sabina Ren pilot Gera Sindulla and moody droid Chopper form a team spaceship“Ghost”, ready to strike back the forces of evil. Heroes do not yet know that they trace of ominous Inquisitor … 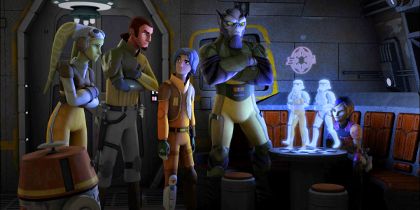 Are expected to appear on the screens of such popular characters of the saga, as Lando Calrissian, Obi-Wan Kenobi, C-3PO and R2-D2. Show will give voice to characters as already involved in the creation of different projects franchise actors and stellar newcomers. Freddie Prinze, Jr. (“I know what you did last summer”)announce Keinan and Inquisitor voice spoke the famous Briton Jason Isaacs (“Harry Potter “” The Awakening »/ Awake). Given the task to destroy the Jedi villain will be armed with a unique lightsaber, the design of which at one time was created for the video game The Force Unleashed.

“In a galaxy came the dark times – said the creator of the show, Dave Filoni. – We decided to do the protagonists of a small group of rebels, acting in the spirit of Robin Hood and his friends. The presence of the Jedi in this team great increases their chances of success in the fight against the Empire. In the first season, we pay a lot of attention to how these motley characters become a real team. In our work we try to focus on the spirit of the original trilogy. “ 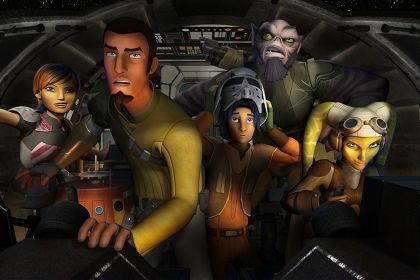 Guide Disney does not hide the fact that the events of the series may affect the story of the seventh episode of the space saga, which will premiere in December next year. New cartoon studio project riveted the attention of fans of the animated series and loyal fans of the franchise “Star Wars” well before the premiere. Company bosses praised the work of the creators of the show, extending the Star Wars Rebels for a second season even before the airing of the first episode. Fans of Star Wars Rebels  yes Force be with you!