TaskOne – set of hammer and nails for a smartphone 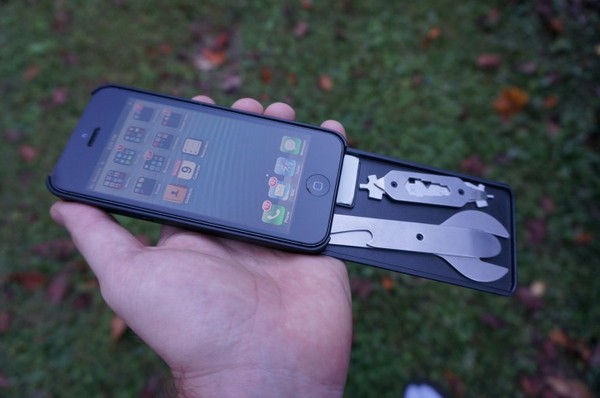 American designers and inventors have created a super compact set of tools for mobile devices from class IPhone from Apple. Unusual device was named TaskOne and is not the usual case-pocket, where different tools are put to work not with the smartphone. Why the need for a set of super thin and compact wrenches with a smartphone – is not known, but the guys from TaskLab firmly convinced that their child will appreciate the many economic male.

The set includes a miniature working TaskOne scissors, a few wrenches bicycle keys miniature screwdriver, stylus for smartphone and a toothpick. All this can be used as a bike lovers, and just any other person. Each of the keys has several slots, and screwdriver – replaceable nozzles. Overall TaskOne – this lovely miniature repair kit directly under your smartphone for any occasion. At the presentation of his invention of the guys even changed TaskLab wheel (tire) bike using only its own set of “mobile” keys.

Set under TaskOne worn on bottom cover smartphone mounted on its “edges.” The thickness of the mobile device and its weight is not much increased. All smartphone can also be put in a shirt pocket. To remove or put the key is taken out enough to pull the lower lid and TaskOne opens as a box of matches.

Now the device is in the prototype stage, and its creators have launched kraudfandingovuyu company to raise funds. The cost of one set TaskOne is 30 U.S. dollars, and after-market it drop to 20-25 dollars – creators promise. Good set to many kinds of smartphones, but it was created just under size iPhone. The creators also promised to increase the number of compatible set of mobile models.