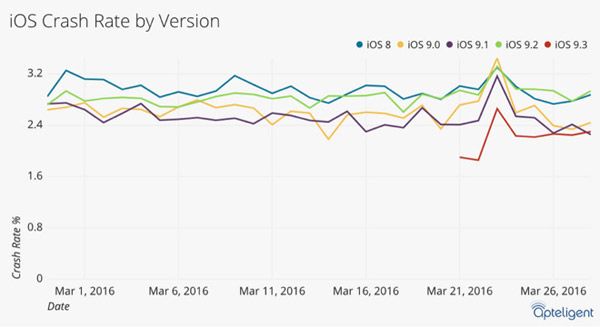 Despite the well-publicized problems with the upgrade and operation of references in iOS 9.3, the operating system has become the most stable platform for Apple in recent years. At least in this California-based company, analysts believe Apteligent, calculate the percentage of failures in the iOS 9.3.

As it turned out, the new iOS 9.3 was marked by very low failure percentage of 2.2%, being more stable than iOS 8, 9 and 9.2, which fell more than 3.2% of cases. It does not quite live up to the new operating system of Apple and Android 6.0 Marshmallow platform, which also turned out to be far from ideal with a result of 2.6% failures.

Apteligent research results were quite surprising to many users on the background of reports of problems with links in iOS 9.3. Not to mention the troubles faced by the owners of the old Apple gadgets, trying to set them iOS 9.3.

But kupertinovtsy promptly decided last problem by releasing modified version of iOS 9.3, bug fixes iPhone and iPad activation. Apple is known about the problem with hanging some applications when working with links. And engineers are already working on a solution.